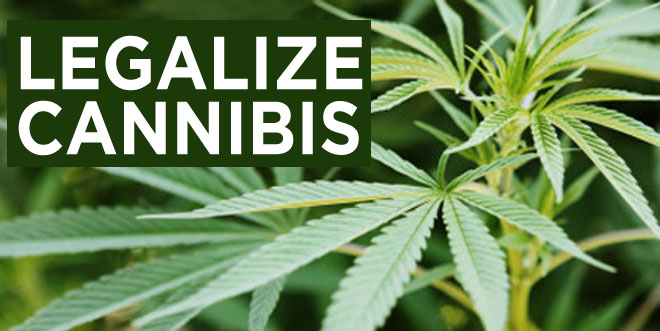 [Nate McMurray is the Democratic Party’s endorsed candidate to oppose US Rep. Chris Collins. McMurray is currently the Supervisor of the Town of Grand Island, New York.]

I don’t do drugs. As I have said repeatedly, I don’t even drink, which has probably cost me some friends (and some business) over the years. I’m not a jerk about it. You can do what you’d like, and I still enjoy the company of others as they enjoy a glass of wine and I enjoy a Coke.

But I am going to be an advocate for the legalization of cannabis. Yes, weed, pot, dope, grass reefer, whatever you want to call it. I want to farm it, tax it, and use it to fight real problems.

I’ve never had a hit

Please don’t misunderstand me. Weed, let’s call it that here, is not good for your brain. I don’t care what anyone tells me, I’ve been around enough people to see this. It’s especially damaging to children’s brains, and kids should never smoke weed.

And we all know it can decrease motivation. In Quentin Tarantino’s 1997 movie “Jackie Brown,” the character Ordell tells his girlfriend, Melanie, that smoking too much marijuana destroys ambition. She responds, “Not if your ambition is to get high and watch TV.”

Please remember, however, that long before weed was outlawed and demonized, many partook of and cultivated the plant. There are various theories about how or if the founding fathers smoked weed, but we do know that George Washington himself grew hemp for industrial purposes for most his life and considered it as a competitive cash crop. So maybe we should not say #legalizeit, but say RElegalizeit.

But people smoke it

Regardless, we all know people use it. And not just a select group. Over 40% of people have smoked weed at some point in their lives. Some visitors to Town Hall reek of weed. And I have encountered people throughout all levels of society that enjoy it. Thus, we waste hundreds of thousands of taxpayer dollars on attempting to put everyone charged with smoking a joint through the legal system. But those are only a fraction of the people who actually use marijuana. Think about it: all this effort and money to enforce laws that objectively do not represent the will of the people.

I’ll say it again: we need to legalize marijuana, properly regulate it, farm it, tax it, and use it to fight real issues. This is not a radical stance. Ontario, just a short drive across the border, legalized it. Marijuana is already legal for recreational use in eight states. It’s legalized for medicinal use in another 20. Denver is actually returning sales revenue because of the huge influx from marijuana sales. Can you imagine?

The evidence does not show that marijuana use leads to harder drugs. In fact, there is evidence that weed use deters opioid abuse. We could even use the proceeds to fight the opioid epidemic. (Deaths due to opioid overdose dropped almost 25% in areas where marijuana is legal.) Objectively, alcohol is even more dangerous than pot. Look it up. No one overdoses from pot. It doesn’t make people want to fight or make impulsive life-altering decisions. Highway fatalities in Colorado have dropped since the legalization of cannabis.

If you look at the evidence, weed is less of problem than the problems we have endured for generations because of our attempts to fight the will of the people. The war on drugs has been the longest, most unsuccessful, and most expensive war in American history, and it led to the the largest prison population in the world. Saying, “I’m tough on drugs. Stop weed!’ sounds good and might get votes, but it’s just not real.

We need to regulate it in a way that matches how we live. If someone in your life called you right now, and said, “I made a mistake, I smoked weed and need you to come pick me up,” how would you react? You wouldn’t call 911 and report them to the cops. You’d respond in a reasonable manner, and talk it out.

A young child on Grand Island

Lisa told me that her daughter suffered from all manner of ailments and was on a complicated cocktail of drugs. She no longer takes those drugs; she uses medical marijuana. As a result, her life is one of far greater joy, and her days as a student at Huth Elementary on Grand Island are much less stressful and painful

We need to be educated and informed on this issue, and get in front of it. Let’s see how it can help our community. I’m looking forward to the first weed sale at the Farmer’s market! No offense, but I’ll still be buying pie.

Porn-loving federal employees using government computers during work hours for porn-surfing may not have enough to do!
What to Look for in a Mental Health Electronic Health Records (EHR) Provider