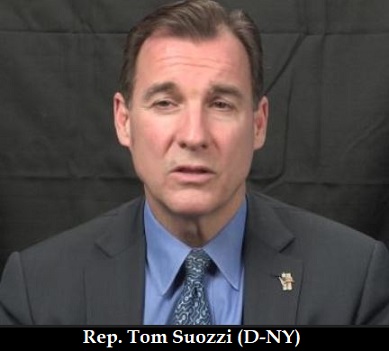 Nearly four decades ago, Ozzy Osbourne crooned the words “I’m going off the rails on a crazy train.”

Suozzi—who a dozen years ago ran for governor of New York as a political centrist—now seems to be urging armed insurrection against a sitting, democratically-elected president because of things the congressman imagines the chief executive might do.

After being asked by a constituent about what consequences Trump would face if he broke laws, Suozzi replied that “it’s really a matter of putting public pressure on the President and making it public.”

“This is where the Second Amendment comes in quite frankly, because you know, what if the President was to ignore the courts? What would you do? What would we do?” Suozzi continued.

Actually, it’s refreshing that a Democratic officeholder from liberal Downstate New York understands that the Second Amendment wasn’t written so, as Suozzi-endorsing New York Governor Andrew M. Cuomo once asserted, hunters could have a firepower advantage over deer.

But while Suozzi, who was up until recently a vocal gun control backer, may now grasp something fundamental about the Second Amendment, he made a rookie mistake and forgot one of the most important unwritten rules that comes with the Right to Keep and Bear Arms: Keep the crazy talk in check.

Implying you favor shooting the president, or at the very least overthrowing him under force of arms, is never a good idea if you want people to think you should keep your right to own the means of delivering deadly force.

It’s doubly bad when it comes just days after the Parkland, Fla. shooting. Folks are kind of sensitive about people who advocate gun violence right now.

The Secret Service takes that stuff kind of seriously, too, and it just tends to creep out the neighbors (and, in Suozzi’s case, the voters down the street).

You could possibly give Suozzi a pass, assuming that he just spoke carelessly and passionately, and said some things off the cuff that maybe weren’t that wise in hindsight, right? Well, you’d be giving him too much credit, then.

Proving that he wasn’t done digging his hole, Suozzi trotted out long-time aide Kim Devlin before the media, bearing this chestnut:

“Taking a page from such great Americans as Thomas Jefferson, James Madison and Alexander Hamilton, Congressman Suozzi explained why our founding fathers created the 2nd Amendment as a way for citizens to fight back against a tyrannical government.”

One wonders if Devlin is familiar with another founding father, Aaron Burr.

Suozzi himself once said,  “Faith and religious beliefs are the most effective, existing sources of commonality that need to be emphasized and relied upon.”

The congressman should follow his own advice, and bust out the family Bible. He could do a lot worse than this gem, found in the Book of Proverbs: Even a fool, when he holdeth his peace, is counted wise: and he that shutteth his lips is esteemed a man of understanding.