Following the receipt of a letter from Kristanna Loken’s lawyer, Artvoice has made several changes to the story below [and a one word change in the headline. It is always our goal to report the truth. The changes – for clarification purposes – are in capital letters in order to be easily discernible to the reader. Loken, through her lawyer, denied she is a member of a sex cult. We will have more on Loken and her lawyer’s demands shortly.

Kristanna Loken, the actress who appeared in Terminator III, is WELL KNOWN AMONG NXIVM FOLLOWERS BOTH PAST AND PRESENT TO BE a staunch Nxivm follower, a fact well known within the secretive Nxivm sex-slave cult.

Nxivm recently made headlines after its leader Keith Raniere was revealed to brand WOMEN ON THEIR PUBIC REGION and blackmail female followers.

Raniere was arrested in Mexico on March 25, and deported to the US, where he was arrested by federal agents and held without bail on charges of sex trafficking and forced labor.  Loken became a Nxivm member NO LATER THAN the summer of 2013

As recently as October 18, [just a day after the NY Times – following a story by this writer – wrote about the sex slave cult – and just days before Raniere fled the USA to avoid prosecution] TWO SOURCES TOLD ARTVOICE THAT Loken attended an advanced secret women class called Jness TRACK #11 in Albany NY where Raniere was then residing.

Jness WAS led by Raniere UP UNTIL HIS ARREST and former Smallville actress Allison Mack. The secret teachings of Jness includes the doctrine that women must be monogamous with their man and women must accept their man being polygamous. Raniere also teaches that if a man ejaculates on a woman – especially on her face – it means he has marked her for ownership.

Jness has been described by former Nxivm members as the training ground for DOS – the Raniere-led women’s master-slave group that brands women and uses blackmail to coerce them into having sex with Raniere and others – according to a federal complaint against Raniere. IT IS NOT KNOWN IF LOKEN IS AN ACTUAL MEMBER OF DOS.

When she last visited Raniere, Loken – ACCORDING TO TWO SOURCES – stayed with REPUTED DOS slave Vany Huber in her home in Clifton Park, a suburb of Albany NY, just a few doors from Raniere.  Sources close to Loken tell Artvoice that, on her first meeting with Vanguard PRIOR TO August 2015 , he agreed to have sex with Loken and summoned her to his private quarters. About nine months  AFTER SHE WAS REPORTEDLY ENGAGED IN INTIMATE RELATIONS WITH RANIERE she gave birth to a son whom she named Thor. BECAUSE OF THIS MEMBERS OF NXIVM SPECULATED THAT RANIERE WAS THE FATHER OF THE BABY.

Loken “Announced on Facebook that she is expecting her first child, but has not revealed the child’s father nor its sex. [February 2016] She gave birth to a son named Thor in May 2016. Child’s father is unknown.’

She was born in Ghent, New York. She is half German, half Norwegian and grew up on her parents’ apple farm in Upstate New York.

According to one insider, “It was no secret. Keith Raniere told everyone that Kristanna had sex with him on the first night she met him. Keith loved to tell the story of how she once had a [redacted] with a member of the royal family and a rock star [name redacted] and Loken wore a [redacted]. Keith could not stop talking about it. She also gave Keith [redacted] but they still had sex anyways.”

Another source who was close to Loken said, “I am convinced that Vanguard is the baby daddy.”

Loken as of April 7, 2018 appears on an online video endorsing Raniere’s teachings.

Loken and lawyer Amanda Canning – who is a known DOS slave – are seen together on Instagram pictures in wine county dated 3/28/18 from her Instagram account IF THEY HAVE NOT BEEN TAKEN DOWN. 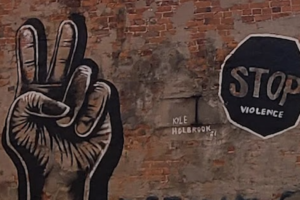