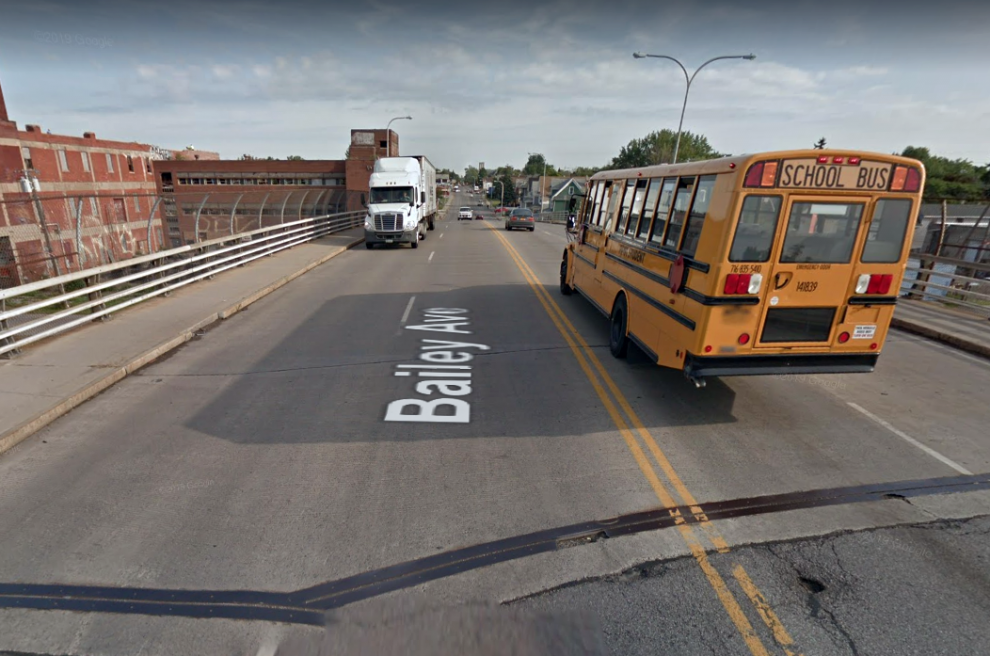 Residents and business owners have been asking Mayor Brown and the City of Buffalo Department of Public Works for years to implement traffic calming measures to no avail.

Early Sunday, a man was struck and killed by the driver of a motor vehicle at the 1700 block of Bailey Avenue. Since 2014, 120 pedestrians and 41 bicyclists have been hit by motor vehicles on Bailey Avenue, with three of these crashes resulting in fatalities.

The City of Buffalo’s Department of Public Works has agreed to long-term improvements on Bailey Avenue; however, these will take years to implement. In the interim, as requested by community members and business owners, temporary improvements should be immediately implemented to prevent future injuries and deaths of those traveling the corridor and further property damage and deleterious economic impacts for Bailey Avenue businesses.

“The Department of Public Works tells us they don’t have money. They find money for all kinds of projects all over town but not the east side. The community has asked for stripes on Bailey for years, it’s busy on Bailey, there are new schools and businesses going in. We need infrastructure for safety. How many “accidents” have there been?” said George Johnson, President of Buffalo United Front, Co-Founder of the East Side Bike Club, and member of the Bicycle Pedestrian Advisory Board. “At some point, if you’re in charge, you need to look yourself in the mirror, and ask, what are you doing to make things safer for people. The way it looks now, it looks like you don’t care about the people on the east side. I bring recommendations to the Bike-Ped board, from my community for safety. The city spends all this money on law enforcement, that is money you can use to build things up so you won’t need law enforcement.”

“We are urging Mayor Brown, the Common Council, and the Department of Public Works to make immediate temporary traffic calming improvements, including crosswalks, a centerline, and temporary bike lanes, on Bailey Avenue,” said Justin Booth, executive director of GObike Buffalo. “The city’s continued negligence towards this corridor has contributed to three deaths in the past five years. The Bailey Avenue corridor, which is the most dangerous street in the City of Buffalo and has been historically disinvested in for more than half a century, should be the city’s top priority.”

Traffic violence involving pedestrians and bicyclists is on the rise around the nation and has resulted in millions of injuries and more than 7,000 pedestrian and bicyclists deaths. The Buffalo-Niagara region is a hot-bed for bicycle and pedestrian injuries and fatalities–from 2008 to 2018, 44 people were killed by vehicles while walking or biking in the City of Buffalo. A disproportionate number of those injured and killed are people of color.

“The lack of crosswalks and other street markings is the most glaring issue faced by Bailey Avenue. Markings need to be painted as soon as possible to make the streetscape safer for people crossing, driving, parking, walking, and biking along Bailey. Without these improvements, Bailey Avenue is a 50-foot wide asphalt no-man’s-zone, preventing many types of retail businesses from being as successful as they can be.”

In November of 2019, in response to a letter from a business on Bailey Avenue, the City of Buffalo’s bicycle and pedestrian advisory board asked the Mayor and Common Council to immediately implement necessary improvements, including adding a center driving line and painting crosswalks. The business requested these improvements after a vehicle crashed into the storefront causing significant damage; the third such occasion in as many years.

The City of Buffalo initiated a feasibility study for Bailey Avenue. In January 2020, it hosted a public town hall meeting, encouraging the public to discuss and learn more about future improvement projects along the University District’s portion of Bailey Avenue.

To date, they have not made any temporary improvements.

About GObike Buffalo. GObike Buffalo is sponsored by Independent Health. We are working to build a thriving, dynamic and connected Buffalo Niagara region by promoting biking, alternative transportation options, and improved streetscapes to create positive impacts on health, our environment, our streets and the overall quality of life for all residents. For more information, visit us at gobikebuffalo.org.