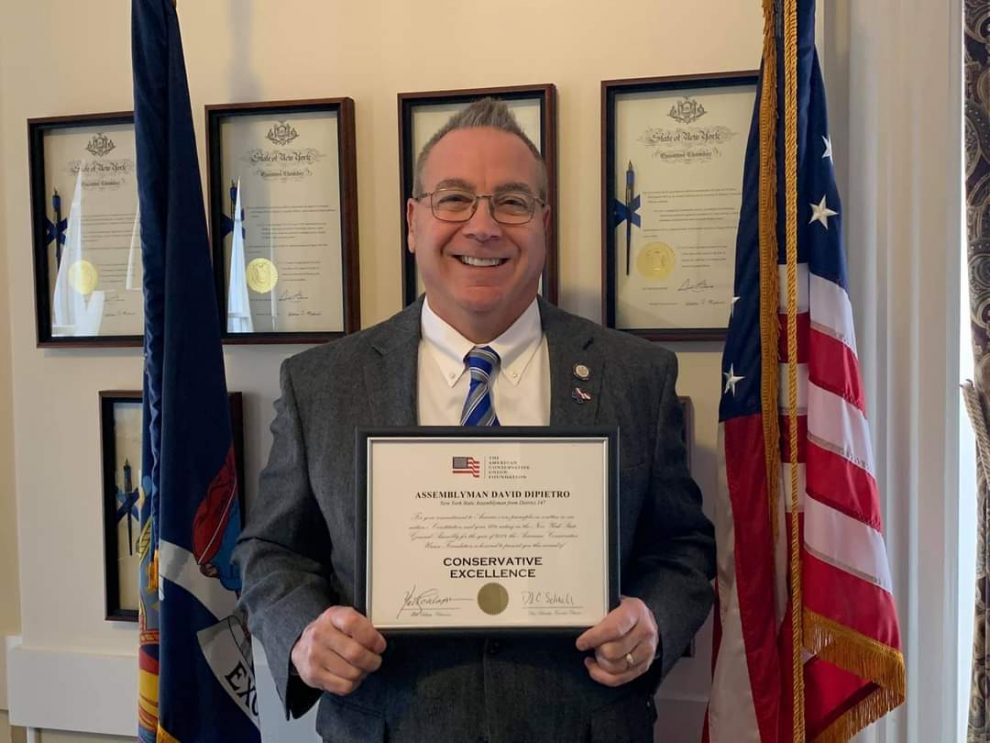 While New York is being decimated day by day, with illogical, insane policies and corrupt, despotic politicians, there is one star which is shining brightly.

Right here in Western New York, we have a jewel of a legislator of which no other state can boast.

Assemblyman David DiPietro has been awarded by the Conservative Party twice nationwide and three years in New York State as the top of his party.

This is quite an honor.

He works tirelessly day and night for his constituents because he is a legislator who actually cares.

Hard to believe, but it is true.

To put the moniker of ‘politician’ on Mr. DiPietro is demeaning.

The political landscape of late has brought to light massive corruption and impropriety by many ‘politicians’, therefore, the monikers we shall choose to address Mr. DiPietro is ‘legislator’ and ‘Patriot’.

A politician has no authority to take away your constitutional rights, yet look around and one shall see that it is happening at breakneck speed.

Because you are letting them.

A Patriot is someone who vigorously supports their country and is prepared to defend it against enemies or detractors.

Thus the moniker of ‘Patriot’ being assigned to Mr. DiPietro.

The term ‘politician’ these days, connotes corruption, greed and CONTROL.

That does not describe Mr. David DiPietro.

He is a God-fearing, family-loving husband and father, and defender of Freedom, who works continually to uphold the rights of people he represents.

He is one of a handful of elected men and women in Albany who courageously stands up to the tyranny being doled out by a one-sided, unconstitutional legislature currently in power in NYS.

IT IS A VERY HARD JOB BEING A PATRIOT IN ALBANY

Surrounded by corruption and being one voice ringing the bell of freedom among people who want your freedoms taken away, is not only hard, it is downright COURAGEOUS.

Therefore, his awards are well deserved.

He decided to run for office to make change for the better of society. What he found in Albany is graft, corruption, horse-trading and coercion.

But, even for all that, he is still in there pitching for his constituents.

DiPietro has the distinction of being the only legislator in New York State to score a perfect 100% among the Assembly and the Senate.

To determine the scoring the Conservative Party (www.cpnys.org) tracked legislation throughout the current session in Albany, issued support and opposition memos, and determined, at an executive committee meeting, which key issues would be used for rankings.

The Bills considered comprise a variety of issues including, but not limited to, economic, health, safety, and pro-life policies that affect all New Yorkers.  The Conservative Party believes that it is the best way to keep the public informed of key votes and let the taxpayers know how elected officials spend their hard-earned money.

While policy in Albany has been trending away from conservative views, in fact going to the very far Left, Assemblyman DiPietro has stayed true to his districts conservative rural roots.

To be the only legislator to score 100% proves his consistent drive toward the never-ending battle for freedom which requires constant alertness and a willingness to fight for his constituents in Western New York.

What are Conservative Values?

To be a Conservative, one must uphold certain standards. Among them are: Selflessness, Integrity, Objectivity, Accountability, Openness, Honesty and Leadership.

In other words, take responsibility for your fellow man, own up to mistakes, call out corruption where you find it, look for the greatest good that can be brought for everyone, rather than only looking out for yourself.

Conservative values are basically the values that your parents brought you up with, if you were lucky enough to have been raised by parents who truly cared about you.

Some might say that there are legislators in office in Albany that do not uphold any of the above standards.

People with an ability to discern between good and evil can see the decay and downward spiral of society at breakneck speed as of late by a radical element which has been FORCING their insane policies upon society.

They do not want family, religion, babies, rule of law or the Constitution.

They do not want YOU to have rights.

One man in Albany does.

And that man is Mr. David DiPietro.

Join in congratulating him on his most auspicious award.

For further information feel free to contact the 147th Assembly office at (716) 655-0951 or email at dipietrod@nyassembly.gov