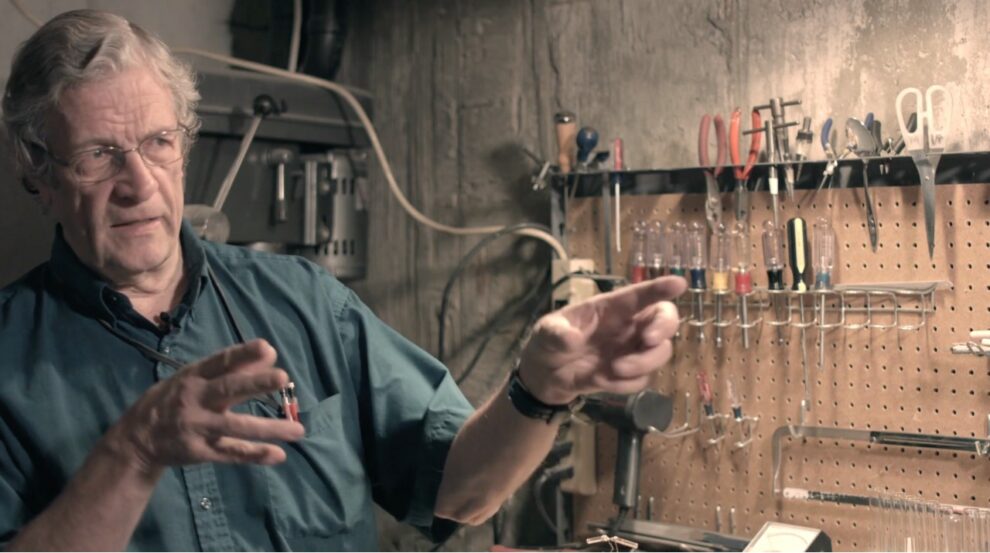 Artvoice recently had the chance to interview director Arturo R. Jiménez, who has been working in documentary and narrative films for over ten years now.

Jiménez’s films have been shown at festivals all over the world, and some of his recent work includes the award-winning narrative short film “El Fantasma” and a short-form documentary titled “Steiner’s Workshop,” which is the focus of today’s interview.

“Steiner’s Workshop” trains the camera on Nyle Steiner, a notable musician and inventor whose instrument, the Electronic Valve Instrument, or EVI, has made a lasting impact on film music and music creation in general.

Jiménez, already an avid researcher and music journalist, was fascinated by Steiner’s work and knew that he wanted to learn more.

In our interview with Jiménez, he shared details and insights about the process of creating the documentary and speaking with Steiner about his work and legacy.

You’ll find our full interview with Jiménez below, and interested readers can watch the full documentary here.

We’d like to hear more about “Steiner’s Workshop.” What inspired the creation of this documentary?

Nyle Steiner may not have celebrity status for casual movie fans, but his contribution to film history is enormous. As a filmmaker and as an avid movie watcher, I’ve always been interested in the behind-the-scenes details and fascinating factual tidbits that bring our favorite big-screen stories to life, and Nyle’s work in some of the most acclaimed films of the past 40 years is something to be celebrated and recognized.

First of all, let’s take a second to acknowledge the fact that he invented a musical instrument. How many people have actually invented a working and beautifully sounding instrument? How crazy and wonderful is that? Nyle took his creation, the EVI, or Electronic Valve Instrument, and played on the musical score of a great number of classic movies, including director Francis Ford Coppola’s masterpiece “Apocalypse Now” and the Harrison Ford-led “The Mosquito Coast.”

I knew I wanted to explore Nyle’s work but I was even more interested in creating a very personal portrait of a man with one of the most original, creative, talented, and curious minds I’ve ever met. “Steiner’s Workshop” also allowed me to create a film about two of my favorite topics as a film fan: movies about movies and stories about radical geniuses.

Were you familiar with the EVI prior to your work on this film?

I remember years ago listening to some of Nyle’s work on film and recognizing this very specific sound that the EVI creates. It’s a trumpet-like sound mixed with a high synthesizer that is pretty unmistakable. “Jacob’s Ladder” was probably the first time I remember listening to that sound. The film, starring Tim Robbins as a distraught Vietnam vet, has this deeply haunting soundtrack composed by the great Maurice Jarre. I remember how important and powerful the music to that movie was for the story.

Little did I know that over a decade later I would be in a studio with Nyle while he serenaded the crew with his EVI. As a music journalist in Mexico City, I dove really deep into finding strange and unique musicians and sounds. I was especially interested in the pioneers of electronic music and the use of the synthesizer and inevitably I found myself going into discussion boards and finding out how unique and under-recognized the EVI and Nyle’s work was in the world. I feel so lucky I’ve gotten a chance to be a documentary filmmaker for over ten years to explore my interests and to be the geekiest, most obsessive version of myself and still come off as professional.

I was definitely very intimidated at first. Nyle is not only the most humble artist I’ve ever met, but he’s also very private. I was basically asking him to not be those two things during our shoot. The film required us to go into his sanctuary, his lab, and follow him and pry about his work and career. I had driven from Mexico to Utah to film and I was ready to pack my bags and head back if he had had enough of us.

But thankfully, Nyle also turned out to be one of the most generous interview subjects I’ve collaborated with. His generous nature was so reassuring and inspiring that I carry that with me to this day. The film touches upon his willingness to let other people take his original designs of his work to make their own versions and there are so many fans, inventors, and musicians with only great things to say about Nyle and the guidance he always provided.

Talking to Nyle also had its funny moments because his brain is so much more advanced than mine and his knowledge of engineering was so complex that when I would ask him to show me some of the stuff he was working on in his lab, I would get lost immediately. I would often have to say “explain that again, but imagine you’re talking to a 5-year-old, so make it simple and easy to understand.” He didn’t know I was the 5-year-old trying to wrap my brain around his inventions.

Have you previously explored film music in your work?

I started to work as a music journalist pretty early on in my career, and by 2005 I was writing for publications like Rolling Stone Mexico and was working at a radio station. During that time I was also doing a lot of camera work for music-related documentaries and videos, including a movie about the influential Mexican punk band Molotov and a couple of live music videos for The Fader. So music always felt like a big part of my filmmaking career.

I feel comfortable in that world and I feel I have a common language with musicians when I work with them and we’re scoring one of my films. One of my most ambitious projects as a director was a documentary on legendary Mexican composer and bandleader Juan García Esquivel. Simply titled “¡Esquivel!”, the documentary is a celebration of his legacy and his original vision.

Esquivel’s extended body of work includes scoring many incredible films and that definitely got me thinking about the way musicians approach film work vs. recording for a studio album. Funny enough, it was through the Esquivel documentary that I first got to approach Nyle. He was playing at an Esquivel tribute concert and I was filming the soundcheck. I remember everybody suddenly getting really quiet as this man took out a little instrument that almost looked like a flute. He started playing these powerful and haunting sounds out of this new contraption. I was hooked! I needed to know more.

What, if anything, sets this doc apart from your other work?

I actually feel “Steiner’s Workshop” fits well with the rest of my filmography. I’m obviously not trying to make the same film twice, but I do like to explore worlds set in a very specific time but that have a unique quality that makes them feel timeless. I think Nyle’s work feels like that.

I’m also very interested in complex, unconventional people and protagonists that engage the viewers. I’d ideally like for the audience to never be passive while watching my work. Whether it’s Esquivel’s retro-futuristic take on orchestra music and asking the audience to reevaluate the value of pop music, or reexamining Lee Harvey Oswald’s character and demons in my recent narrative film “El Fantasma”, I value great characters with a strong and passionate drive.

Has Steiner’s creativity inspired you in any way? Have his contributions reinforced your love of film?

Definitely. Especially for documentaries, you can’t help but be changed by every project you film and every person you encounter. Nyle’s curious nature is something that every artist should aspire to have. And I get reenergized by watching people like him and allowing myself to get lost in their work. As a film director, you want to lead and inspire, and seeing that curiosity and generosity in him makes me want to explore different worlds with new and unique narratives.

I think Nyle has forged a very unique career where he had to find ways to scratch his creative and inventive itch. I’d like to have Nyle’s energy and passion for the things he loves. Meeting Nyle and getting to see him play was also such a wonderful experience that has definitely reinforced my love for the work that people like him do in film. I can’t help but find a connection between his work and the contemporary musicians playing today.

The main goal of the film was to create a very personal tribute to Nyle and for people to discover his work and appreciate his legacy. It feels wonderful to know that every time we screen the film at a festival, we can add a few more fans to Nyle’s work. I structured the film so we end on a high note, literally, by letting Nyle play us out with some striking EVI melodies.

I’ve seen people come out of the movie theater humming that little tune and it always makes me smile. Our first public screening was at an outdoor festival in Layton, Utah with Nyle’s friends and family and it blows my mind that only a few years later we had another screening in Bydgoszcz, Poland, at the biggest open-air film festival in Central Europe.

Every single time we screen the film someone asks where they can get the EVI and I hope somewhere out there there’s a young musician composing the next great film soundtrack with Nyle’s invention.

Useful Tips On How To Properly Deal With An Injury
How to Get Tickets For Important Art Events at Reasonable Prices?