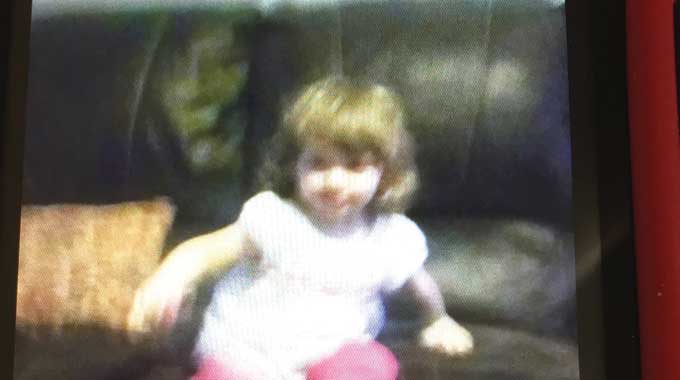 A family living in the historic Oliver Street District in North Tonawanda submitted to Artvoice a photograph of their almost two-year-old daughter sitting on their couch.

A family living in the historic Oliver Street District in North Tonawanda submitted to Artvoice a photograph of their almost two-year-old daughter sitting on their couch.

Readers may be able to discern an image on the couch of what appears to be an elderly woman whose countenance might be described as resembling a story book witch.

The family told Artvoice that for weeks their daughter spoke of a witch the child called “Peg” who would regularly come into her bedroom and other places in the house usually at night.

Sometimes the presence of “Peg” would scare the child and she would call for her parents who would come into her room and find no one there.

At first the parents thought this was the creation of the child’s imagination, although they admitted it was a little “creepy.”

The matter took a strange turn when the mother recently photographed her child on the couch and observers found the image in the photograph that both parents [and others] said they had not seen on the couch before or after.

Was it shadow, or ghostly image?

“I’ve seen that couch many times and that image is not there,” said a family friend.

“Is it a witch?,” asks the child’s father. “Although I have never seen an image like that before or after on the couch, I’m inclined to think it must have been the lighting, combined with the TV set which was on at the time which created a shadow on the couch. Still, it is odd. My daughter would stare as if in a trance and say she saw a witch in the house. Then we take this picture and somehow – call it a shadow if you like – it just happens to be a ‘shadow’ in the form of a face of a witch. I’m looking at the couch right now and I can’t see any shadow like that. Who knows sometimes children because they are pure see things adults can’t see.”

The family reports they plan to move out of their rented home at the end of March, not because of “Peg”, but because they plan to purchase a home.