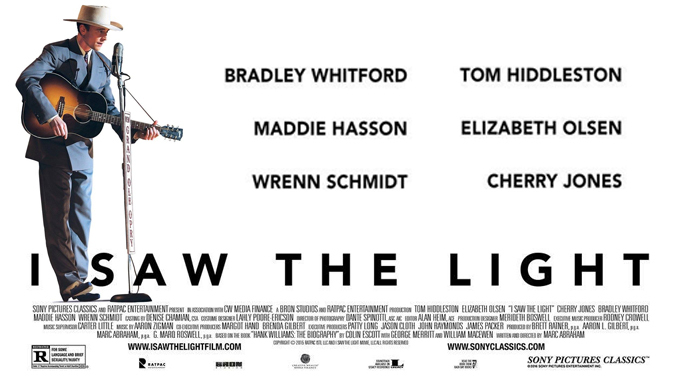 Beloved by American music fans for his one-of-a-kind vocals and inspired take on the folk, blues, and gospel genres, the music of legendary country western singer-songwriter Hank Williams has lost none of its power in over the half-century since the ill-fated musician recorded such classic ballads as “Lovesick Blues”, “Your Cheatin’ Heart”, and “I’m So Lonesome I could Cry”.

I Saw the Light

Beloved by American music fans for his one-of-a-kind vocals and inspired take on the folk, blues, and gospel genres, the music of legendary country western singer-songwriter Hank Williams has lost none of its power in over the half-century since the ill-fated musician recorded such classic ballads as “Lovesick Blues”, “Your Cheatin’ Heart”, and “I’m So Lonesome I could Cry”. Twinged with bitter-sweet nostalgia, alternating between devil-may-care bravado and heart-rending sadness, it’s understandable to assume the many (sometimes contradictory) emotions reflected in Williams 35 recorded songs were pulled directly from his tragic personal life, plagued as it was by adulterous relationships, health problems, alcoholism, substance abuse, and depression. Starring Tom Hiddleston as Williams and charting the early part of his career through his rise to fame and up to his untimely death at the age of 29, writer/director Marc Abrahams musical biopic I Saw the Light contains all the hallmarks one would expect from a film based on the true story of a doomed artist, which ultimately makes the films failure that much more surprising.

Perhaps the overall blandness of I Saw the Light has something to do with the familiarity of the material.  The musical biopic formula, engineered for maximum award-winning potential with films like Ray and Walk the Line, was already on the verge of devolving into self-parody well before Walk Hard: The Dewey Cox Story so mercilessly lampooned the genre as to effectively make it that much harder to take films like I Saw the Light seriously.  Throughout the film, one almost senses Abrahams checking off a list of biopic clichés as surely as his soundtrack checks off Williams greatest hits.  Early scenes of a young Williams and backing band show him toiling away in various small-town dives and radio stations, his singular sound not yet ready to be understood by the masses, are followed shortly by ones in which the unlikely star gets his big break, impressing skeptical record company suits with the Grand Ole Opry hit-making machine. In between detailing Williams early brushes with success, the film focuses on his marriage with first-wife and fellow musician Audrey Sheppard (Elizabeth Olsen), with whom his always tumultuous, increasingly disintegrating relationship would prove pattern.

For most of its first act, I Saw the Light is an engaging biographical drama, offering viewers a compelling portrait of a brash musical artist as he was just finding himself amidst the 1940s Nashville country scene.  Hiddleston convincingly mimics the iconic performer’s distinct vocal cadences both onstage and off, but more importantly it’s a performance that goes beyond the superficial, conveying just the right notes of charm, vulnerability, and underlying desperation. Olsen is similarly believable as his long-suffering wife and both players make the most of their scenes together, despite the stilted writing. However, just as Williams bright and promising career was sunk by his alcoholism and drug problems, so too does I Saw the Light devolve into an unfocused, depressing slog.  The narrative loses its momentum as Abrahams exercise becomes increasingly one-note, while scenes detailing Williams relationship with lover Bobbi Jett (Wrenn Schmidt) and second wife Billie Jean (Maddie Hasson) fail to leave any kind of impression. Despite Hiddleston’s impressive transformation and the great soundtrack, I Saw the Light is likely to disappoint fans of Hank Williams, ultimately doing little to shed light on the man behind the music.

Live From Daryl’s House Review
This Modern World: The Observer