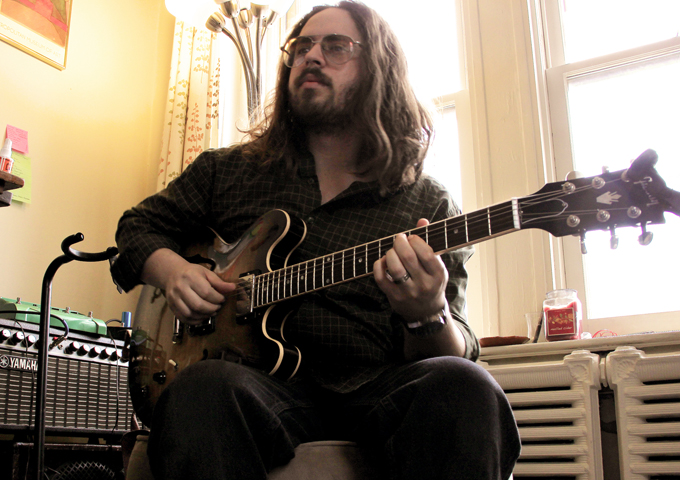 “The younger generation of jazz players are very aware of the older guys,” said sax player Ellen Pieroni. “Pausa Art House has really brought a lot of that together because they feature a lot of younger artists, as well as the classic Buffalo jazz musicians and these people meet. Actually, that’s what I was most excited for with my jazz fest.”

In Phil Lesh’s book Searching for the Sound: My Life with the Grateful Dead, he describes an April, 1970 gig at San Francisco’s legendary Fillmore West. Opening for the Grateful Dead was Miles Davis playing with Chick Corea and Keith Jarrett on keyboards, Jack DeJohnette on drums, the powerful John McLaughlin on guitar, bassist Dave Holland, Arito Moreira on percussion and Steve Grossman on sax. Lesh writes:

“As I listened, leaning over the amps with my jaw hanging agape, trying to comprehend the forces that Miles was unleashing onstage, I was thinking, ‘What’s the use? How can we possibly play after this? We should just go home and try to digest this unbelievable shit.’”

A live recording reveals the Dead actually played an inspired set that night, and we know that as the Dead evolved over the years they continued to “digest this unbelievable shit” called jazz.

“I urged the other band members to listen closely to the music of John Coltrane,” wrote Lesh, “especially his classic quartet, in which the band would take fairly simple structures (‘My Favorite Things’ for example) and extend them far beyond their original length with fantastical variations….”

For the Grateful Dead, the grandfather of jam bands, extended jamming/improvising was the way to break the confines of a song and enjoy new musical discoveries. Since the heart of jazz is improvisation it’s not surprising that for a lot of young players jam bands are the gateway to jazz.

There’s been an explosion of new jazz bands on the Buffalo scene. I believe Jon and Lázara Nelson, owners of Pausa Art House, deserve some bit of credit for this. They created an intimate atmosphere at Pausa for musicians and audiences and introduced a tremendous respect for jazz, and a sense of the importance of that music. They coupled that with aggressive programming that allowed a lot of veteran jazz musicians and younger musicians to both become a part of the new Pausa music scene.

“The younger generation of jazz players are very aware of the older guys,” said sax player Ellen Pieroni. “Pausa Art House has really brought a lot of that together because they feature a lot of younger artists, as well as the classic Buffalo jazz musicians and these people meet. Actually, that’s what I was most excited for with my jazz fest.”

Pieroni, who books the bands at Nietzsche’s, produced the recent five-day Nietzsche’s Jazz Festival with over 30 bands, something she programmed herself. “I featured a lot of up and coming jazz groups with young people,” said Pieroni, “and I had some old timers there too. It was a really cool blend, like with Mark Filsinger’s Eleventet. Bobby Militello playing on the main stage and then playing next up in the front of the bar is The Fredtown Stompers, young musicians from Fredonia playing dixieland. I love them, they’re one of my favorite bands.

“The Buffalo Jazz scene is something that I’ve always admired from a young age,” said Pieroni. “I used to see a lot of jazz with my parents–I probably dragged them. I used to see Bobby Militello and the big bands at the Colored Musicians Club. I was just really interested in jazz and I totally got them into it. They love it now.”

A contributing factor the proliferation of new jazz groups is the freedom Buffalo musicians have to choose who play with.  There’s a long history in the music world of musicians from different bands pairing up, like the notable supergroups Blind Faith or the Traveling Wilburys. But in Buffalo musicians have taken it to a remarkable level and the exchange of players from band to band is contributing heavily to the excitement of playing and the possibility of what a new band could be. A musician doesn’t have to settle for one sound but can be in multiple groups that each offers a different satisfaction. There’s a lot of freedom going on and it’s creating some great musical combinations.

“I try to play in as many genres as people will let me,” said Pieroni.

Another busy player is guitarist/composer Adam Bronstein. He plays his original compositions in Freehand Band, plays funk-jazz in THE TRUTH, plays soul-funk in Blue Rootz, plays in the jazz quartet Gravy, plays jammy stuff in NuShark and is frequently a sideman with the Jon Lehning Quintet.

“I think the cool thing about the jazz scene right now is that there are some groups that are set but there’s also a lot of freelancing going on,” said Bronstein, “which doesn’t happen in the jam world or in the rock world. In that world usually you practice with just these five guys and you do a show.”

With all this cross pollination of players comes a melding of musical styles, sometimes to the point where musicians themselves have a

“I love the Grateful Dead,” said Bronstein, “but none of my music sounded like that. When I thought I was doing jam band stuff people would tell me I was doing jazz. Now I’m doing jazz and the jazz guys are telling me ‘oh, I like your stuff cause it’s kind of jammy.’ I guess it’s my nature to always straddle the line.”

“The lines between jazz bands and jam bands are getting closer,” said Pieroni, “jazz fusion and funk are getting blended into these jam bands. Honestly, a lot of up and coming jazz groups are classified as jam bands or they’re paired with jam bands. I know Intrepid Travelers for example do a lot of fusion and jazz but they’re often thrown in with the jam band scene. The crossover of players being in jam bands and jazz bands is becoming more common. It’s tough as a jazz player when you’re more interested in playing jazz fusion or funk, because you’re kind of looked down upon for not playing the standards, bebop or cool jazz or the things that the old timers consider really important. But I do think that this younger group of jazz musicians in the area are kind of bridging that gap. I know John Lehning has done a couple tributes to Chick Corea, and a lot time John will feature Dave Schiavone (sax) or Bobby Militello or one these heavy hitters to play with his band.

“My concept with programming the Jazz Festival was that I wanted to mix the old timers with the younger bands that play Nietzsche’s pretty regularly,” said Pieroni. “I wanted people that used to play here to play here again. And I wanted to get more jazz at Nietzsche’s.”

“I loved the jazz fest,” said Bronstein. “I know all the musicians loved it. It really turned out a different crowd than normally goes to Nietzsche’s. People who go to Pausa and people who are part of the Eastside Jazz crew, to see them on that Wednesday or Thursday night at Nietzsche’s at the Jazz Fest was pretty cool.

“The Ellen Pieroni Quartet was actually around a little before I started trying to do any of this jazz stuff,” said Bronstein. “She had Harry Graser in her band and Anthony Henry, who I work with a whole lot. So a lot of people would say that Ellen has brought a lot of people together, especially now that she’s booking bands at Nietzsche’s.”

“There’s a real sense of community and very little drama in the music scene around here,” said Pieroni. “There’s all these musicians and we’re all on the same team, we’re all trying to do the same thing and we try to collaborate.”

Yes they do collaborate, a lot. Bronstein and Pieroni now play together in THE TRUTH, along with Donny Frauenhofer, who also plays with the Intrepid Travelers. Frauenhofer and Pieroni are the band Duo +. Drummer Ryan Campbell plays with Bronstein in Gravy and he also plays with Pieroni in Blue Stone Groove. Ryan Campbell is also the drummer in a thousand other bands including Bronstein’s favorite Rhubarb and he was the drummer in Peanut Brittle Satellite, a band that influenced Bronstein towards adopting jazz.

Pieroni has her favorites, too: “Fredtown Stompers, 12/8th Path Band, Intrepid Travelers, The Observers, I love The Observers. Those are like my four favorites. I could probably go on. There’s all these bands that I admire. I love the Freehand Band, I go see them all the time. I love Adam’s compositions.”

The list of active bands in Buffalo today is astounding, as is the list of bands who share players. To begin unwinding who is playing with who is not something I care to do, however, what’s clear is that there is a burgeoning music scene in Buffalo with a lot of musicians playing some very interesting music. There are venues that are willing to be adventurous and let young jazz musicians play their rooms, places like Nietzsche’s, Pausa, Ironworks, McGarrett’s, Dinosaur BBQ, Gypsy Parlor, Hot Mama’s Canteen, Lockhouse Distillery and others. (We hope more venues will join in, too.)  And there is a sense of community among musicians that in many cities becomes the breeding ground for great things to happen.

While this article was meant to be only a snapshot, Artvoice will hopefully get the chance to dig in deeper into both venues and bands. In the meantime, if you haven’t done so already, I urge you to go out and experience some of the new jazz groups that are playing.

Anyone who wants to see Ellen Pieroni play in one of her bands should check out one of her upcoming shows: April 30, 8pm Blue Stone Groove at Gypsy Parlor; May 5, 7pm-9pm The Duo + at Merge; May 26, 9pm Folkfaces at Nietzshe’s; June 10, 9pm Buffalo Afrobeat Orchestra at Nietzsche’s.