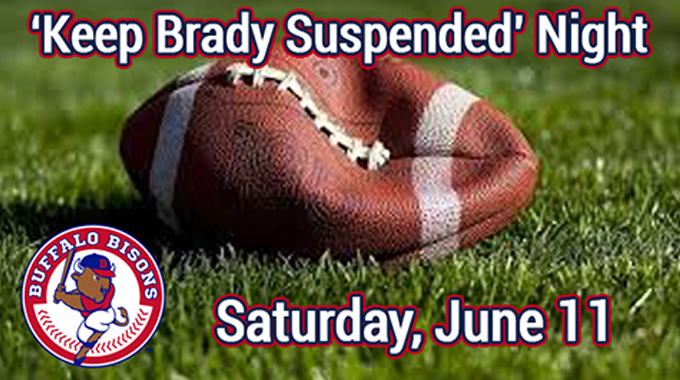 Responding to the fate of their beloved football quarterback Tom Brady, who again faces a four game suspension for his alleged role in “Deflategate”, the PawSox announced a “Free Brady Friday” promotion, which happens at McCoy Stadium in Pawtucket on June 10.

BY ANDREW KULYK AND PETER FARRELL

It started out innocently enough, all the way In Pawtucket, Rhode Island, home of the AAA Pawtucket Red Sox and smack dab in the middle of Patriots Nation.

Responding to the fate of their beloved football quarterback Tom Brady, who again faces a four game suspension for his alleged role in “Deflategate”, the PawSox announced a “Free Brady Friday” promotion, which happens at McCoy Stadium in Pawtucket on June 10.

“Tom Brady is one of the region’s most beloved athletes and public figures. This evening allows PawSox fans, so many of whom are Patriots fans, to show their support for him.” That was their announcement in the press release as stated by PawSox Senior Vice President Dan Rea.

Simply put, anybody named “Tom” or “Brady” gets free admission to their stadium at the PawSox game on June10.  A portion of game ticket sales gets sent to a local charity, and footballs will be used for ceremonial first pitches.

So nobody around these parts really thought that Bills Nation would just roll over and take this without a fight, right?

“The day after Pawtucket announced their Free Brady promotion, Bucz (Bisons VP/general manager Mike Buczkowski) sent an email to the entire staff asking for ideas on what we could do as a counter punch,” said Bisons public relations director Brad Bisbing. “So we came up with ‘Keep Brady Suspended’ night, and it’s happening at Coca Cola Field this Saturday, June 11, one day after the event in Pawtucket.”

Here’s how this Saturday will work… any patron bringing a properly inflated football will receive a buy one/get one free admission for that evening’s game, which is actually a single admission doubleheader against Charlotte. The footballs will be donated to area youth football programs. Fans are also encouraged to bring spare UN-DESTROYED cell phones as donations for Cell Phones for Soldiers, which ironically, is a Boston based charity.

But there’s more. Unlike the special privileges being offered in Pawtucket to all the “Tom’s” and “Brady’s” of the world, the Bisons are will permit fans with those names into Coca Cola Field this Saturday, but they will not be allowed to actually watch the game for the first four innings.  Special t-shirts will be on sale in the team store, and a post game fireworks show afterwards. Best of all, throughout the game fans will be treated to video highlights of the biggest cheaters in the annals of sports, with a special tribute to Patriots head coach Bill Belichick.

The competing promotions have made national news. Within hours of making the announcement, the Buffalo Bisons’ official twitter account received 1300 retweets, eventually garnering over 200,000 impressions. National media outlets made inquiries to both teams. “We like the fact that hard core Bills fans have become engaged with the entire idea,” said Bisbing.

Paul Baker is Eastern Region editor for national site Stadium Journey (www.stadiumjourney.com) and is based in Dartmouth, Massachusetts. He worked in the front office for the Pawtucket Red Sox for 12 seasons., and says that in his local area the promotion has been received very well so far. “I think it depends on who you talk to regarding how it has been received. I think most people have taken it in good humor, knowing that it is the minor leagues, and sometimes you have to do whatever it takes to get the people in the door. Of course, there is a segment of the fan base that has not taken it so well. From my perspective, I think it was a very well done idea. I can’t speak for the Pawsox front office, but I would think they took it in the fun spirit in which it was intended.”

Of course, not everyone is taking this tongue in cheek. Bisbing appeared on Boston sports talk radio station late last week, and, said the reaction wasn’t all that great from callers, as he was listening in to the live feed while waiting for his turn on the air. “There were some annoyed callers offering very strong opinions that this entire promotion was sort of lame,” said Bisbing.

Baker is hoping that the PawSox promotion will help their attendance, where the team has suffered at the gate since new ownership has announced plans to move to a new stadium at some point. “Their average so far this season is only about 4,500, which is half of what it was just a few years ago. The new regime has tried a bunch of new promotions, which haven’t gone over well here. Hopefully this promo will swing the pendulum a little bit.”

As for Buffalo, the Bisons are counting on a big local turnout to send a clear message what locals think about the whole Brady scandal. But in a respectful way. “At the end of the day, minor league baseball teams are a big fraternity of sorts. We have the same business model, we support each others’ efforts, and events like this are designed to be light hearted and good natured,” said Bisbing. “We’ll make all the ‘Toms’ and “Bradys’ comfortable in the concourse for the first four innings, enjoying our menu of craft beers. Remember, it’s two games Saturday and then fireworks. Enough for everyone.”