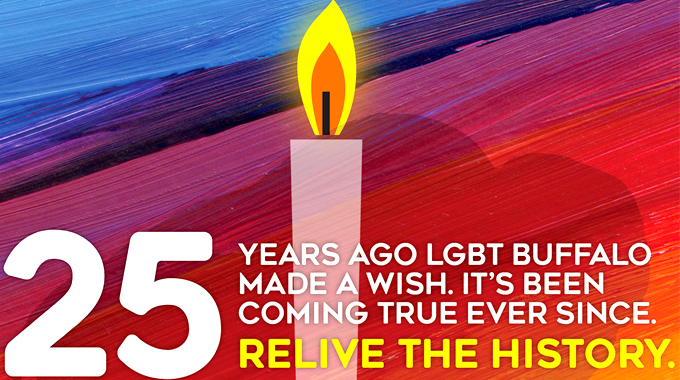 In 1991 the Candlelight Wish Celebration was held lakeside on the steps of the Buffalo and Erie County Historical Society. Buffalo’s LGBT community crossed a threshold that night.

In 1991 the Candlelight Wish Celebration was held lakeside on the steps of the Buffalo and Erie County Historical Society. Buffalo’s LGBT community crossed a threshold that night. It was a first, because it was public and it was outdoors. The 1991 Candlelight Wish was the lead story on all three television channels. You will see the video of the three station’s coverage at our commemorative event –

What else was groundbreaking?  Elected officials spoke at a public gay pride event WITH the media covering them when it was a liability to stand up for gay citizens. We reached out to all of Buffalo to join us and even made invitations for people in the gay community to send to their families and friends to join them.

In 1991, you could be fired from you job for being gay, you could be evicted from your apartment for being gay.  It was courageous for people to come to the original Candlelight Wish Celebration and risk being filmed by the media and seen on the news by all of Buffalo. The Buffalo News said 500 people were there.  What we did together changed Buffalo. So now it’s time to celebrate this special historic moment.

We were fringe.  We were The Other.  We were exotic. Or we were dangerous.  It wasn’t like it is now. At the 1991 Candlelight Wish Celebration, our media message was loud and clear:  “We are a part of Buffalo. We are one of the ways Buffalo is diverse.”

That sounds so ho hum now doesn’t it? It was radical then. We were not yet an “out and proud community.”  We were still gripped by The Closet. So we were “friends of Dorothy” or we listened for cues when our gaydar told us somebody might be gay or lesbian. Our lives had the burden of chronic discretion. Stressful.  Spiritually unhealthy.

Now happily we trailblazers want to tell our younger community members what we did to change things. Because we have a much different world now, thanks to us.

The drag number danced on the steps of the Historical Society was radical and glorious. The song was “I am what I am” from La Cage Aux Folles–23 performers. Wait til you see the dance on the big screen at the Evergreen Commons.  You’ll be blown away!  For our upcoming 2016 Candlelight Wish Celebration we recreate an updated version of this number with pointe ballerina Collin Kirdahy performing a breathtaking ballet, in drag.

The footage from years ago is moving to watch.  For those who were around in those days, you will see friends.  You may see yourself!   And you’ll surely see people you may have lost touch with. But what caught me off guard when I first watched these videos is seeing friends and loved ones who have died.

Watching the drag number is especially hard with all 23 dancers all looking so joyful, so alive.  Like Jimmy Smith, who organized and choreographed this amazing dance.  He’s gone.  It’s doubly heartbreaking, because he died of AIDS.  Mike Maffei – who sings and was on the Pride Committee, gone – to AIDS.  So many others, gone.

Dr. Ross Hewitt, who was the first AIDS doctor in town – at ECMC – a trailblazer for sure – was the stage manager for 1992. You’ll see him in the video.

For 25 years, I’ve carefully saved the four videos that we made in 1991 and 1992.  I spent hours with a video production company digitizing all four VHS tapes and editing them. You will see a lot of extraordinary footage with the screen acting as storyteller–but there’s an interactive element, as well.

For example, a trailblazer will describe what happened at the 1991 Candlelight Wish Celebration and say:: “Leah Zicari stepped up to the mike began to sing her song “Glory Glory.” You’ll see the clip of Leah singing for a bit and then Leah will walk up almost into the Screen and sing along with herself. We fade the video and the “Glory, Glory” lyrics come up on the screen so the Wish Chorus and the audience can sing along.

Madeline Davis will also be gracing the stage to sing her nationally know anthem – Stonewall Nation and our Wish Chorus, directed by David Granville will sing along with her. Anne Hartley Pfohl and Chuck Basil will recreate their roles 25 years later and sing “What I did for Love.” You will have just watched the footage from 25 years before of them singing – and then have the joy of hearing them sing the same song, again 25 years later.

We’ll do the Wish together at the end. It will be lead by the authors of the Wish, Greg Bodekor and Betsy Swift, who is coming from N. Carolina to be a part of this. The Wish is amazing. In 1991, we made a powerful Wish for the future and blew out the candles together.  THIS WAS NOT A VIGIL!!!  Yes, yes, I know we automatically think “vigil” when we hear there will be “candles.”  NOT THIS dammit!  This was the Candlelight WISH Celebration.  CELEBRATION!   No grief here, boyfriends and girlfriends  – just power and hope and attitude!

We will be honoring Trailblazing allies who had the courage to speak at this first public gay pride event 25 years ago when it was a liability to stand up for gay folks. This includes Common Council President George K. Arthur, Citizen Action President Ellen Kennedy, and Buffalo News columnist Donn Esmonde. Come watch the video of the prophetic things they said and thank them in person for all they’ve done.

We are a multigenerational, diverse LGBTQ community now in 2016.  Come and personally say thank you to all the trailblazers who came before you.

Everyone is welcomed. All of Buffalo. Come join the Buffalo LGBTQ community as we take this unique opportunity to celebrate how far we’ve come.

Chinese Ash Borer Poses Threat to Forests in Erie, Niagara Counties
Around and About: As Pivotal State Senate Race Heats Up, Stocker Speaks Up!
Comment