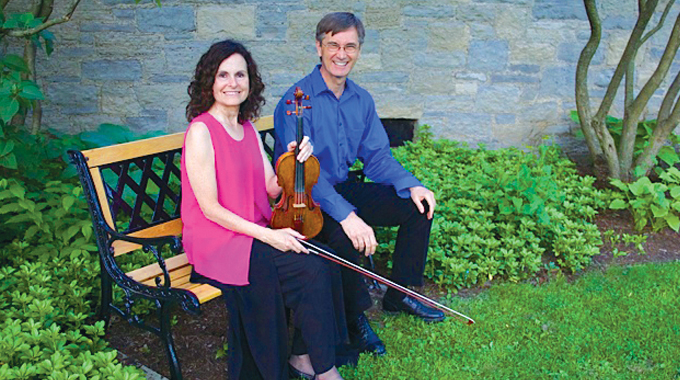 Back in 1993, two locally-based musicians, violinist Nancy McFarland Gaub, who was then a member of the Buffalo Philharmonic Orchestra, and her husband, pianist and educator Eugene Gaub, decided to build on the synergy of a group of community activists who founded the Roycroft Campus in 1989 to help revive the legacy of Elbert Hubbard and the influential Roycroft community of craft workers and artists that he had originally founded in 1895 in East Aurora. Nancy McFarland and Eugene Gaub launched the Roycroft Chamber Music Festival, a two weekend event that features some of the finest area musicians along with equally talented, but geographically distant performers, who return, year in, and year out to perform both favorites, as well as rarities of the chamber music repertoire in St. Mathias Episcopal Church.

For the past 22 years, the couple has continued to organize and lead their festival, attracting the same high caliber musicians, which in itself is a noteworthy achievement for any classical musical series. Their accomplishment is even more remarkable since the Gaubs moved to Iowa 20 years ago to take up teaching positions at Grinnell College; yet, like many other of their out of town musician friends, they have come back for the festival every June since, managing from a very considerable distance to keep the music playing.

Eugene Gaub attributes the continuing success of the festival to the fact that “it seems to satisfy desires and needs both of the community and for musicians. We hoped it would last forever, because chamber music is something that we and most musicians think of as the best, most exalted form of music-making, which can provide incredibly enriching experiences for listeners as well. So, first and foremost, I would like to express our gratitude to the community for its support, as each year has been like a dream come true for us.”

The Friday, June 17 concert features works from the Classical and Romantic eras, as well as one from the 20th century. While Beethoven’s string quartets are, not surprisingly, often programmed on chamber music concerts, since they represent the absolute pinnacle of the genre, his other chamber music works appear far less often, perhaps none more than his string trios. Andrea Cone, a member of the first violin section of the BPO, will be joined by her section colleague Megan Prokes, who will be playing on the viola, an instrument on which she is equally at home, and cellist Michelle Djokic in a performance of Beethoven’s “String Trio in D Major, Op. 9, No.2”.  Violinist Nancy McFarland Gaub and pianist Eugene Gaub, the Festival artistic directors, will join cellist Michelle Djokic in Spanish composer Joaquin Turina’s “Piano Trio No. 2 Op. 76”, a sparkling and evocative work with distinctively Spanish elements, composed in 1933. Mendelssohn composed the last of his six string quartets, the “String Quartet No. 6 in F minor, Op.80”, two months before his death on November 4, 1847, as an homage to his beloved sister Fanny, who had died on 17 May of that year and it bore the title ‘Requiem for Fanny.’ Violinist Andrew Jennings and Amy Glidden, principal associate violin of the BPO, will be joined by violist Donna Lorenzo and cellist Sarah Markle for this performance.

The Festival will conclude on Saturday, June 18, when violinist Amy Glidden and cellist Sarah Markle pair up for the very rarely programmed “8 Pieces, Op. 39”, by Russian composer Reinhold Glière”. BPO principal clarinetist John Fullam will be joined by pianist Eugene Gaub in a performance of Brahms’ sublime “Sonata in E Flat Major for Clarinet and Piano”. The festival will conclude with a very rare performance of the “Grande Sestetto Concertante, K. 364”, an arrangement for string sextet of Mozart’s exquisite “Sinfonia Concertante” for violin, viola and orchestra. Violinists Nancy Gaub and Andrew Jennings, violists Donna Lorenzo and Megan Prokes, and cellist Michelle Djokic, will be joined by BPO bass player Edmond Gnekow for the performance.

Both of this weekend’s concerts take place at St. Matthias’ Episcopal Church at the corner of Maple and Main Streets, and begin at 8pm.