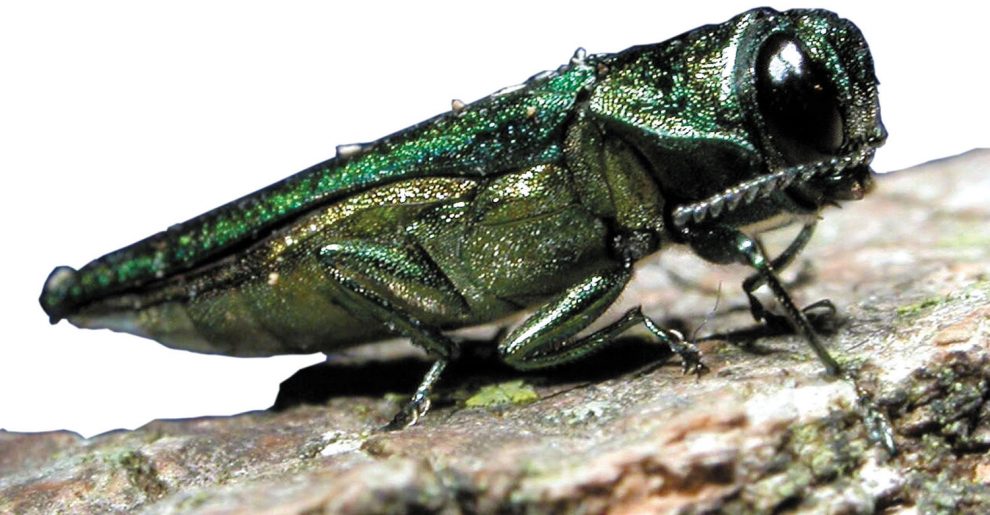 While cheap electronics, clothes and other goods come into this country in huge quantities from China every day, the emerald ash borer is the kind of Chinese import we don’t need.

The small, metallic-looking green beetle – about the size of a grain of rice – previously unknown in North America, emigrated sometime around the turn of the century, as larvae burrowed into ash wood the Chinese used to make shipping pallets for auto parts heading to Detroit.

They spread rapidly, and now pose a threat to every one of the 90 million ash trees here in New York, according to the state Department of Environmental Conservation. In Erie County, one out of every five trees is an ash.

“Every ash will be affected,” said David Paradowski, regional forester at the DEC. “There is no escaping it. If you want to save your tree you must treat it. You’ll need to spend money every two years for the life of the tree.”

Most trees die within two to four years of becoming infested. The emerald ash borer is responsible for the destruction of over 50 million ash trees in the U.S. since its discovery in Michigan. The economic loss is incalculable.

“It can be in the tree and the tree won’t show anything until it is dead,” Paradowski said. “It’s not like storm damage.”

First reported in Randolph, in Cattaraugus County about 50 miles south of Buffalo, the borer had made its way to Erie County, specifically Lancaster, by 2011. By 2014, ash trees were dying at an alarming rate in the Niagara Frontier.

The impact on the ash has been compared to the effects of chestnut blight and Dutch Elm disease, which devastated forests in the 20th Century.

The DEC designated much of Erie and Niagara counties as a severe risk area, and has imposed a quarantine on the movement of firewood and the disposal of infected trees and their byproducts. Because the borer does not travel far on its own, limiting movement of infested material will slow its spread, officials said.

For both the DEC and the U.S. Department of Agriculture, the biggest problem in dealing with the emerald ash borer has been that no research had been done on them prior to their introduction to North America. The Chinese are  lackadaisical when it comes to environmental concerns, which is one of the reasons they are able to sell their goods so cheaply here.

As it stands now, the only way for owners of ash trees can prevent them from falling victim to the ash borer is the use of pesticides. These can be administered with a variety of methods, but the DEC recommends tree injection as the safest for delivering pesticide.

It is also the most expensive. On average, injection treatments can run from $100 to $350, depending on tree size. As a rule, an infected ash tree with a minimum of 30 percent of its canopy remaining has a good chance of survival if treated. The treatments need to be repeated every two years for the life of the tree.

Spraying and putting pesticides in the ground around the trees roots are less expensive, but have a greater impact on air and groundwater.

The U.S. Department of Agriculture has even turned to biocontrol to stop the borer by releasing predatory wasps in Randolph, the Hudson Valley and also the Lancaster-Cheektowaga area.

Ash, along with hickory, is one of the most commonly used hardwoods for tool handles in North America—particularly in shovels and hammers where toughness and impact resistance is important. It is also the wood used to make Major League baseball bats, and the people at Louisville Slugger are taking the potential extinction of the North American ash forests so seriously they’ve been experimenting with various other woods.

The wood is also popular for kitchen cabinets, but three of its uses are particularly dear in Western New York – White ash is used to make hockey and lacrosse sticks, and black ash is used by Seneca artists to make the beautiful baskets sought after by collectors around the world.

Around and About: Local Trump Media Man Tweets then Resigns
Were You There 25 Years Ago At Buffalo’s First Public Gay Pride Event?