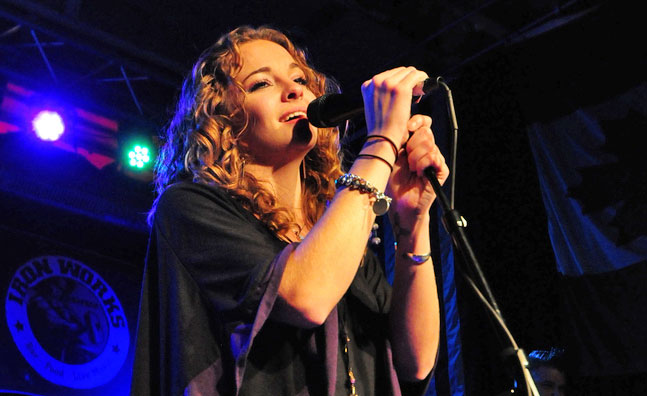 For a band that is described by the press as “Fleetwood Zeppelin,” you may not expect to hear anything really original coming from Buffalo’s Dirty Smile on a given night.  However, with two of rock’s greatest bands attached to the description of Dirty Smile’s musicianship, it’s no surprise they’ve risen to the forefront of Buffalo’s original music scene.

Recently winning ArtVoice’s award for 2016’s Best Original Act was, they will tell you, the result of their hard work and perseverance.

Dirty Smile’s beginnings date back to 2011, when lead singer Megan Brown and guitarist Gus Walters met at open mic night at Milkie’s on Elmwood Ave.  It was the band’s former drummer that introduced them and ironically he introduced the duo to Erik Eimiller, the drummer who would replace him. He also brought bassist Mike Suda to their attention.

Erik had been with a few bands before and Mike had only had experience with music production, but once the foursome started playing together, they noticed something special was brewing.

“They started outgrowing their last drummer and I started filling in for a couple shows,” said Erik, “after about the second show, we all knew it was just a natural fit.”

IN 2014, when guitarist Jesse Raderman was added to the mix, Dirty Smile started to take off and were soon discovered by Ron Hawkins, a member of popular Toronto bands Lowest of the Low and The Do Good Assassins.

“Another friend of mine turned me on to them and it just happened they were looking for someone to mix an EP for them,” said Hawkins, “I immediately liked the tracks I heard from them and we just went from there.”

2014, in fact, proved to be a remarkable year for the band.  Winning the Western New York regional round for at the Hard Rock Rising Battle of the Bands competition led to a performance that year opening for Brand New and Weezer at Edgefest, an experience that was almost surreal for them.

The year was capped off by the release of a 6-song EP, Love Songs for the Damned Vol. 1.

“The songs on Love Songs are about keeping it real,” said Mike Suda, “everybody’s been burnt by a romance gone awry, but it’s about being hopeful that things will change.”

One particular song on the album, “Siren,” was begging for a release since it was used for the Hard Rock competition.  The song was written primarily by the group’s most prolific songwriter, Gus, but the way it came together encompasses everything Dirty Smile tries to stand for.

“I had the lyrics for five years about having fun in a casino and there was just no chorus,” said Gus, “then I just pictured Megan singing it and it just became about her, actually.”

“She’s a siren, I admire. There’s no stopping her now. When she grabs a hold, it’s so on baby.”

Dirty Smile has adopted a group mentality, where everyone has a say in what goes into a track.  In fact, in the liner notes of the album, songwriting is not credited to Gus or Megan or Erik, but to Dirty Smile.

“We all come together and take whatever material is there, no matter who wrote it, we just try to make sense of it,” said Mike, “we call it ‘Dirty Smiling” it.”

Other songs on Love Songs for the Damned Vol. 1 have titles such as “Don’t Lie to Me” and “Insanely Ever After,” song titles that sound as if Taylor Swift had gone off the deep end.  But this is simply another motif that Dirty Smile evokes––wearing their emotions on their sleeve.

“A lot of bands like to put aside all the bullshit in their lives [when performing],” said Megan, “I like to put it in the forefront.”

Megan Brown, especially, will continually bring her emotions to the table, every song being a little slice of her life at that moment.  Although some may think that that would make performing and recording these songs harder, she uses her bandmates as a therapeutic outlet to overcome pain.

“Gus told me once that once I put a song on the table, I’ve got to let go of the emotions,” said Megan.

From there on, the song belongs to the band, each member adding or removing something to or from the song.

“Without the five of us toying with it, the song just isn’t going to work,” said Erik.

This was the case with the song that followed Love Songs, the single “Fly the Coop.”  The song’s lyrics were written by Megan, inspired by her then-boyfriend who just was not supportive of her musical aspirations –“…if you don’t stand by me, I’ll stand alone.”

Through various edits done by the band as a collective, it was immediately released as a single in 2015.

“Fly the Coop,” was more than just a song for Dirty Smile, it represented a moment of growth for the band, one where they were able to celebrate and empower commitment to music rather than holding on to hurtful relationships.

“I haven’t been single much of my adult life, so the title ‘Fly the Coop’ is about leaving that place of comfort, not knowing what’s next,” said Megan, “I felt like I hit a revelation, even though [what happened between me and the guy] hurt.”

Musically, “Fly the Coop” was a vast divergent from the sounds of Love Songs, with heavier guitar, a heavier melody and a darker tone, something they knew was a long time coming.

“It was around the time Jesse joined that we decided to move away from blues-influenced stuff,” said Mike.

That migration steadily grew and has now been realized in their most recent endeavor, the dual single release of “Alive by the Light of the Moon” and “Pain Grows Fonder.”

Once again, these songs were sitting in the band’s arsenal for some time, exposed to a live audience long before they were recorded.

“We performed both of those songs a year before we recorded it,” said Erik, “They were stuck in my head for a year, everyone else forgot about it, then we finally just did it.”

These two songs are much faster and punk rock influenced than their previous effort, another step in the band’s progression.

“People were labeling us as pop-rock, and I didn’t like that,” said Megan, “I wanted to make music I can bang my head to.”

Thanks to the raw, unhinged production by Ron Hawkins, the songs are Dirty Smile’s most aggressive to date.  But it still wouldn’t have been the way they are without “Dirty Smiling” it.

“Those two songs, especially, saw everyone bring something to the table,” said Jesse Raderman, “we were just jamming and all of a sudden those songs came to be.”

Albeit raw sounds, in no way did Dirty Smile cut corners for the recording, still trying to reach the same quality as their previous production efforts.

“Quantity over quality, and by that I mean that the quality will come with a larger quantity of takes,” said Gus, “I watched Jesse record solo after solo [for the recording of those songs].”

Dirty Smile is a band that prefers to release a quality song when it is perfected rather than making people continually anticipate while the band labors over tracks for a new full length album.  Even though the songs are released as singles at the rate of a year at a time, Dirty Smile celebrates these accomplishments with everyone.

“We played Town Ballroom to release those [last two] songs and Ron played with us that night,” said Jesse, “we don’t like to just record and put the song out, we like to make it huge event when we release a song.”

Dirty Smile’s reputation is able to attract crowds based on name alone, their audience always feeds off the wild energy the band puts out, and, together, Dirty Smile plays with a level of mind-melding musicianship that makes it seem as if the entire band is really one entity.

In reality, each of the five members lead differing lives.  You wouldn’t expect any one of them to be insurance salespeople, Cheesecake Factory business developers, prosthetic limb builders, or staff recruiters for hospitals.  This separation causes some anxiety, as the band knows that there is still so much, musically, that they could be doing throughout the day.

“If we were together every day, I couldn’t even imagine the music we’d be making,” said Erik.

Erik, himself referred to the band as being “weekend warriors,” that is, putting whatever time and energy they have while they aren’t working into shows throughout the entire western New York area almost every weekend.  Winning this year’s ArtVoice’s “Best Original Act” award is the result of generating a solid reputation through continuously sacrificing any free time they have into producing and performing at the highest level possible.

“When I first heard that we won, I thought ‘Damn, hard work pays off,’” said Megan, “we sacrifice so much, it’s nice to get the recognition.

But engines can’t rev forever without going up in smoke.  With a baby on the way for one of the members, the Dirty Smile machine has to decrease its load for the moment.  There will be various acoustic shows around town, but you’re going to have to wait until the fall to see Dirty Smile bring the noise again.

However, this is somewhat of a blessing in disguise.  Although proud of their output thus far, some members believe that the set lists, up until now, have become repetitive.  This break will ensure that the next show you see will be mainly new material, leading up to the release of their second album.

“We’ve been playing the same songs for a while,” said Mike, “[when we come back in the fall] we want to release a whole new set.”

Until then, this “Best Original Act” can be heard on their website dirtysmileband.com as well as their Facebook page, facebook.com/DirtySmileBand, where you can also keep up with any upcoming shows and releases.

If Bob Dylan needed to take a step back in order for “Like a Rolling Stone” to come to fruition, whatever Dirty Smile puts out next may be their greatest work to date.

Up to this point, the band’s output has been nothing shy of impressive and the band wants to continue reveling in the glow of originality that allowed them to win this year’s Best of Buffalo award.

“Our focus was always to create original music,” said Mike, “even when we play cover songs, we try to put our fingerprints on them.”

Whatever is said of Dirty Smile should entail remarks of a band that worked best when every member put forth everything they had to complete something that was one-hundred-percent their own.