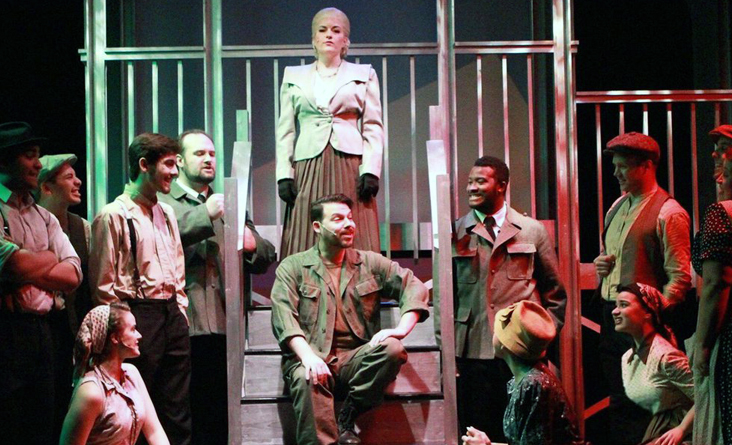 The MusicalFare production of Evita, the 1978 Tim Rice/Andrew Lloyd Webber musical is a highly satisfying affair. Michele Marie Roberts gives a compelling performance as the title character, the working class girl who maneuvered her way into the center of Argentine politics in the late 1940s as the wife of authoritarian leader Juan Peron. Roberts sings the role marvelously and brings an appealingly mischievous spirit to a character that is typically played with pure conniving drive, thereby putting her individual stamp on the role.

While Evita is not one of those musicals that is enhanced by a scaled-down production (think A Man of No Importance or Floyd Collins which emerged as gems in small local productions), the MusicalFare Evita, under the direction of Randall Kramer, with choreography by Doug Weyand, happily provides enough echoes of Hal Prince’s original staging to evoke much of the energy of the original.

The major surprise of the evening is the casting of Marc Sacco as Ché.  When this decision was announced, many were skeptical, as the role is a large departure from the actor’s usual light-hearted stage personae. Talented Mr. Sacco brushes away any doubt the instant he strides onto the

scene. He becomes the perfect embodiment of this revolutionary Argentine Everyman had been modeled on Ché Guevara for the 1979 Broadway production – in those days, Evita herself was all but unknown to the American public, while audiences could be expected to recognize Guevara. (All other productions have wisely dismissed this historically inaccurate connection). Sacco gives a stellar performance that is focused, nuanced, well-modulated, and powerful.

Oddly, John Fredo’s Juan Peron fades into the shadows, never approximating the commanding presence usually associated with the role. Also, it may be a matter of scale, but much of the pointed and ironic humor of Evita (with those iconic sneers and ironic asides that made Patti LuPone a star) is ignored here, in favor of a continuous narrative flow, propelled only by music.

Chris Schenk’s set provides an effective and versatile playing area, and includes intriguing historical projections. Lighting and sound by Chris Cavanagh are very good, and costumes by Kari Drozd and wigs by Susan Drozd give the show the perfect look. The ensemble is strong and polished, equally adept at the vocals (under the direction of Theresa Quinn) and dancing, providing the requisite momentum to this fine production.

It’s Only a Play: Terrence McNally at BUA
THE FOSTER FESTIVAL CANADA’S MOST PRODUCED PLAYWRIGHT