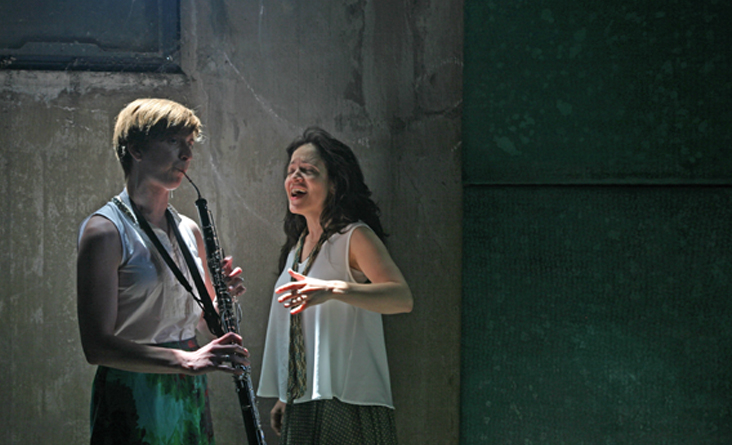 Some of the most original music-making in Western New York in the last several years has had it source in the Wooden Cities Collective, a talented group of locally-based young musicians, many of whom are also composers, in their own right. On Saturday, July 23 at 6:30pm, two of the most talented members of the Wooden City Collective, vocalist Esin

Some of the most original music-making in Western New York in the last several years has had it source in the Wooden Cities Collective, a talented group of locally-based young musicians, many of whom are also composers, in their own right. On Saturday, July 23 at 6:30pm, two of the most talented members of the Wooden City Collective, vocalist Esin Gündüz and oboist Megan Kyle will debut their new duo, Senso di Voce at Silo City. For their first concert together as a duo, they have put together a program that connects Medieval, Renaissance, and Baroque repertoire, adapted for their ensemble, along with modern improvisation.

“The program is site-specific”, says Megan, “designed around the acoustic and spatial properties of Marine ‘A’ Silo. Esin and I have developed a choreography that flows through the space, creating ever-changing relationships between sound source, audience, and the contours of the silo walls. The extreme resonance of the silos brings what we’re doing into a whole new dimension.  Add the evolving late evening light and the ebb and flow of wind through the space – our rehearsals have been magical”. The program ranges from the anonymous Medieval organum, “Alleluia Justus ut palma”, and Pérotin’s “Beata viscera” through Monteverdi’s aria “Chiome d’oro” to the Adagio from Bach’s Concerto for Oboe and Violin, with stops along the way for works by Corelli, Telemann, Purcell and John Dowland. “The program should be about an hour long, with each piece connected to the next” says Megan. “It’s a meditative, otherworldly sort of experience – at least, that’s what it’s been for me”.

The Turkish born vocalist Esin Gündüz, who is completing her PhD in music composition at UB, has also appeared as a jazz singer, in venues as diverse as the celebrated Montreux Jazz Festival in Switzerland, and at the Pausa Art House in Allentown, where she has been featured as the front person for the resAUnance quartet. That free style jazz group, which has developed a sound that can only be described as totally original, recently released their first, critically acclaimed CD. Oboist Megan Kyle, who also doubles on the English horn, somewhat more unexpectedly plays the violin, and she will perform on all three instruments at this event. Megan, an adjunct professor at Houghton College, is a member of the Buffalo Bach Project and has performed with the BPO.

“I’ve heard many concerts and readings at Silo City, says Megan, “so I had some familiarity with the space and with the extreme resonance there. As we chose repertoire, and thought about improvisation possibilities, Silo City seemed more and more like the ideal space. We were never planning a straight-forward recital – almost none of these pieces are being performed exactly as originally written. Instead, we’ve adapted them for our ensemble and have been exploring the aspects of them that are exposed by that process.  Doing that in the strange sonic environment of Silo City has been incredibly interesting.  Also, we wanted to create something immersive and meditative. The music that we’ve chosen has a spiritual aspect, either in a directly religious way, or in the sense that it’s expressing something larger than the human. The feeling I get when listening to and playing this kind of music is very similar to the feeling I get when looking up into the mind-bending heights of the silos”.

“Places with reverberation are heaven for singers”, says Esin. “Every space has its own special properties of reflecting sound, and one can physically feel this, and experience being ‘in’ sound while there. Different spaces inspire me to perform certain material. One hears the reflecting noises, even of footsteps, while entering any space, along with the hidden harmonics in them. Timbres of these three instruments: oboe, English horn and voice, magically come together and contrast. Although only two voices are performing, at times a third voice, called ‘beatings’ emerges as this magical phenomenon comes to life. You cannot replicate this – you have to hear it live! Since the accompaniment instruments are not used in our version of such older repertoire, your attention is naturally taken towards the sound/ timbral phenomena.  And the nourishing resonant chamber of the Silos is extremely helpful, accenting the beauty. The experience is physically existent in space, yet magical at the same time. Very poetically, Megan describes the silos as a ‘post-industrial cathedral’”.

The doors open at 6pm Saturday at Marine Elevator “A” at 120 Silo City Row, at the foot of the Ohio Street Bridge on the Buffalo River. Suggested donation: $10.