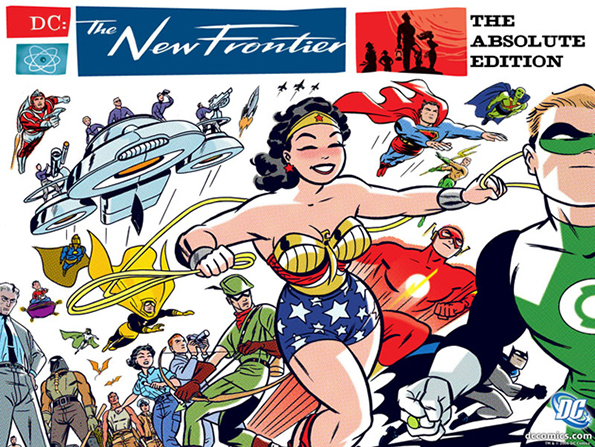 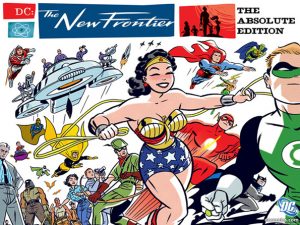 In the history of comics, few works have evolved the landscape beyond the traditional norm. Frank Miller’s operatic take on the twilight days of the Batman in The Dark Knight Returns. The dark, psychoanalytic and perverse look at a world of complex heroes in Alan Moore and Dave Gibbons’ Watchmen. And Darwyn Cooke’s DC Universe: The New Frontier. Opening in the last days of World War II, Cooke tours the DC Universe’s Golden and Silver Ages, showing Superman, Batman, Wonder Woman in our historical context while reflecting their publishing history. For example, the Golden Age Batman has big, curved ears, thin slits for eyes, purple gloves and so on. Cooke, one of those rare writing talents who was also one of comics’ finest artists, lets the pages breath – ironic, as most of his pages take the reader’s breath away.  Cooke opens the page up with a three-panel horizontal stack, breaking it only for timing and emphasis. One example: When former hero and over-the-hill boxer Ted Grant stands victorious over his opponent in a packed Las Vegas amphitheater, you can smell the sweat and hear the chant of the crowds.   While Watchmen and The Dark Knight Returns wallow in the dark grim

ness and rising apocalyptic hysteria of the 1980s, New Frontier grabs onto the post-war optimism of 1950s America.  Even the title takes its name from John F. Kennedy’s acceptance speech as the 1960 Democratic presidential nominee.  Still, the book goes beyond the idealized “good old days,” as Cooke touches on the warts of America of the time, including the Red Scare and racial tensions. Sadly, Cooke passed away May 14. Like many comics fans, the news devastated me. Many comic book professionals have said beautiful and wonderful things about their friend, but I could not let his passing go without saying my own piece.  I only met Cooke once, at the 2015 Niagara Falls Comics Con. I had brought a copy of his most recent adaption of the famous “Parker” novels for him to sign, because the book opened with a gorgeous and incredibly accurate drawing of the Buffalo waterfront circa 1960.  I told him how much I loved his work, and his depiction of my city in these great crime comics, and he and his wife happily told me that the next book he was doing would also heavily feature Buffalo.  He asked if I would like a sketch; I don’t think I could have said “Yes!” fast enough. With a flick of a wrist, like a magician, he had drawn a simple head sketch of the titular character.  He also obliged when I asked for a photo with him.  I doubt we will ever see another storyteller as intuitive and brilliant as Cooke. For that, the world of comics is poorer.  But, as I’ve heard folks say, Darwyn wouldn’t want us to mourn him.  He’d want us to knuckle down, do our goddamned work and, I think, look to our world’s New Frontier.