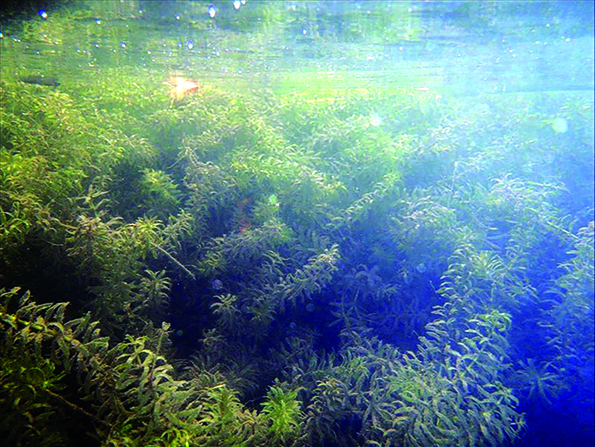 In an attempt to eradicate the invasive aquatic plant hydrilla in the Erie Canal, the U.S. Army Corps of Engineers, Buffalo District, will be treating the canal from the Delaware Bridge in the cities of Tonawanda and North Tonawanda, to West Canal Marina in the Town of Pendleton, approximately 5-miles upstream – with an application of endothall (Aquathol K) an aquatic herbicid.

After application, swimming is prohibited for one day. The concentration of endothall in treated areas will not be toxic to dogs, cats, or livestock exposed to the herbicide. There are no restrictions on catching and eating fish.

“This is the third year of treatment to reduce hydrilla in the Erie Canal and we continue to see a reduction of hydrilla as a result of the treatment methods,” said Mike Greer, USACE project manager. “Our biologists have documented that native plants have begun to repopulate and grow in areas that had been previously infested with hydrilla. The reintroduction and growth of native plants will ultimately provide more habitat for native fish populations throughout the canal.”

It was first introduced to the southern United States in the 1950s when a Florida west coast aquarium dealer began shipping live Hydrilla from Sri Lanka under the common name “Indian star-vine.”

Some hydrilla was dumped into a canal near Tampa Bay, where it flourished. Other reported releases helped it spread throughout Florida and the southeastern U.S. Hydrilla has become the most serious aquatic weed problem for Florida and most of the U.S. causing economic, environmental, and ecological damage.

Recently hydrilla has spread to some of the glacial lakes of the Northeast and Midwest. Many of these sites are also being treated to eradicate hydrilla.

The eradication of hydrilla in the Erie Canal is considered important since the canal can be a major conduit for spread of hydrilla eastward to the Finger Lakes and westward into the Great Lakes.

DEC Regional Director Abby Snyder added, “We encourage all boaters to take action to protect local waters from hydrilla and other aquatic invasive species that move easily between waters on boats and trailers. By following proper boat cleaning and inspection practices, you can make a difference.”

To learn more about what you can do to help prevent hydrilla from spreading, visit http:// www.stophydrillawny.org.