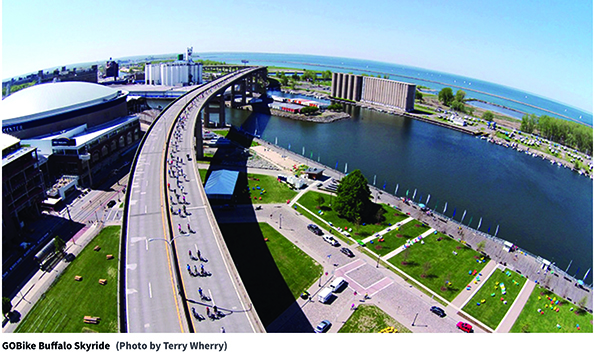 The New York State Department of Transportation (NYSDOT) agreed last week to spend an unspecified sum of taxpayer money on a full and formal Environmental Impact Statement (EIS) to examine alternatives to maintaining the Buffalo Skyway.

The Skyway, a 1.4 mile elevated roadway – peaking at 110 feet – beginning at the Inner Harbor downtown and touching down as Route 5 in the Outer Harbor – spans the Buffalo River.

An environmental impact statement (EIS) is required by the National Environmental Policy Act for actions “significantly affecting the quality of the human environment” and its completion is necessary before the Skyway could be eligible for funding its removal.

The EIS would study identifying alternative routes for traffic and what impact that would have on neighborhoods where some 41,500 daily motor vehicles that presently travel the Skyway would be rerouted.

Based on federal highway standards, the Skyway is defined as ‘functionally obsolete’ due to its lack of shoulders, a feature which causes the highway to close when accidents occur. The 63-year old Skyway is categorized as “fracture critical,” which means failure of any one of a number of structural elements would lead to a catastrophic failure. 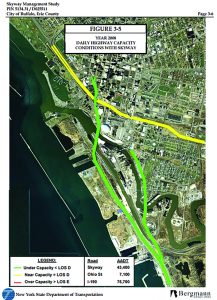 US Rep. Brian Higgins and State Senator Tim Kennedy have pushed for the removal of the Skyway arguing it would foster development of certain parcels along the Buffalo River.

“(The) Skyway is a physical barrier impeding continued economic progress, and razing it will open up new opportunities for development along Buffalo’s waterfront and spur private investment and job creation,” Kennedy said in a statement.

Kennedy said a “full and formal EIS is the first step towards finding out how we can im
prove our infrastructure and open up new land for development.”

In May, Higgins wrote to NYSDOT Commissioner Mathew Driscoll requesting a full and formal environmental review.

Last week, in response, Driscoll wrote Higgins that the NYSDOT will “commence an EIS for the Skyway and surrounding transportation corridors during the current State Transportation Plan period.”

The current State Transportation Plan period began in 2016 and provides five-year funding for a DOT capital program of $22.1 billion, including State-funded investments in the Thruway.

It is not clear when within the five-year framework the DOT will commence the EIS, when it will be completed, who will be selected to do the study, what the final results or recommendations will be and whether the DOT will follow the recommendations.

DOT Spokesperson Gary Holmes has previously said, “The Buffalo Skyway is an integral part of the regional transportation network, carrying about 40,000 cars and trucks a day across the Buffalo River.”

Despite resident requests to remove the Skyway in the past, the NYSDOT selected to reinforce it with new ramps instead of replacing it with a ground level boulevard which was deemed viable in a 2008 Environmental Impact Statement that was required before starting the replacement project.

The Skyway was built in 1953, when the elevated highway served to accommodate the efficient flow of 20 million tons of cargo moved annually via lake freighters in and out of the Buffalo River while at the same time providing an efficient automobile and truck route to the southtowns. 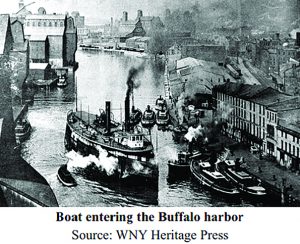 In the mid-20th century, 300 lake freighters worked the Great Lakes; by the early 21st century there were fewer than 140 active lake freighters; in 2016, very few visit the Buffalo River.

The Skyway, which once supported economic growth, now hangs over prime property
– specifically at Canalside and an additional 27 acres of land along the Outer Harbor.

Higgins said recent infrastructure investments such as a $2.3 million South Park Avenue improvement project, an $11 million transformation of Ohio Street, and the ongoing $20 million reconstruction of the Bailey Avenue bridges, could help serve as alternative routes should the Skyway be removed. This would mean considerably increased traffic for these roadways if used as alternatives for the Skyway.

The state has previously estimated that the Skyway’s life could be extended at a cost of $35 million in repairs over the next five to 10 years and $117 million over 20 years.

Some local activists and writers have argued that the Skyway could be closed for motor vehicle traffic but not demolished and maintained for pedestrian and bicycle use.

Buffalo Rising writer, Newell Nussbaumer wrote, “If The Skyway gets demolished, I am willing to bet that many years from that date, people will look back and say that this city messed up again, because of the lost potential.

“The biggest problem with The Skyway, in my eyes, is the noise and the smell of the traffic. Take that away, and open it to the people, and we could be sitting on a goldmine as far as marketing a waterfront destination. Just think of the excitement, the views, the potential for this Jetsonian bridge to be a player in a rapidly reinventing Buffalo.…. Let your imagination run wild. Open your mind and look at The Skyway from all angles.”

Presently there is no pedestrian access between downtown and the Outer Harbor, although ferry boat rides are available through Queen City Bike Ferry at the cost of one dollar each way.

Did Politics Have a Hand in the Pigeon Prosecution?
Corps of Engineers to Use Herbicide to Kill Hydrilla in Erie Canal