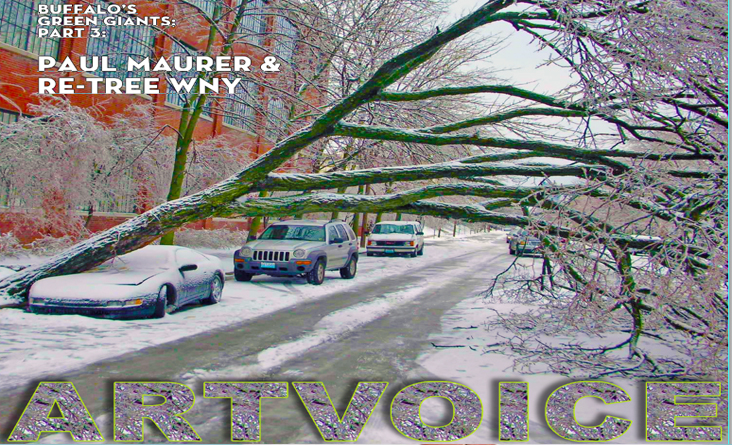 The freakish 2006 October Ice Storm rushed into the heart of Buffalo and obliterated nearly 60,000 of our most vivacious trees.  Thick ice formed on the branches and the weight of the ice snapped off many of the largest branches or felled entire trees. Paul Maurer originally got involved as part of a clean up crew, but he has became much more essential to the health of our city and region through his development of the charitable tree planting organization Re-Tree WNY.

“I got an idea of how bad the situation really was while going to all those locations with these clean up volunteers,” Paul Maurer said, remembering the devastation the October storm brought to the trees of Buffalo.  “There was an immediate need to restore the tree canopy to our city,” said Maurer.

Maurer works in sales at Entercom radio, but his passion is managing the now quite large Re-Tree WNY organization. “I grew up in the Kensington area of Buffalo until I went to school in Dayton, Ohio. I’ve been back in Buffalo working in radio for the last 27 years at Entercom,” said Maurer.

Perhaps it was a love for his own roots (no pun intended) that drove Maurer into action. “This storm itself was unprecedented. The big problem was that the trees still had leaves on them which gathered ice, and the ice was so heavy it broke the limbs right off, which in turn caused power outages and closed off streets.  I got together with people from the area I knew could help, like Americorps.  With this group, we started Re-Tree Western New York,” said Paul, “We got everyone together in the conference room at our radio station [to plan].”

Maurer is not only one of the group’s central organizers and a founder, he also manages the time and contributions of a plethora of people. “No one gets paid to do this,” said Maurer. “We just wanted to augment whatever the general relief effort was. Then we got some help from Stan Lipsey [former publisher of The Buffalo News] who got the newspaper involved and that was our first true donor in 2006.” Maurer wasn’t shy about naming many people from within his group who were instrumental.  Art Traver -Buffalo’s head forester – and Ed Dore from Dore landscaping played huge roles in gathering supplies and overseeing the environmental science behind their efforts at Re-Tree. Although there have been many people involved, Maurer is the man who has been dedicated to this for ten straight years.

As for the success of Re-Tree WNY the numbers speak for themselves. “We have 28,112 trees planted,” said Maurer. “We wanted to plant 30,000 in five years.  There were roughly 60,000 trees affected by the storm so we decided to take half and we split the rest with some municipalities.  We wanted eventually to plant 30,000 from us with 30,000 matched by the community, so in total, we wanted 60,000 trees in five years.” Starting back in 2006, Maurer has been running the show for ten years now, which is quite a bit longer than the original 5-year goal.

Maurer touched on why their timeframe was off by such a wide margin. “The 2008 recession hit and we ran into a good deal of financial difficulty.  So we began raising the funds to plant the trees, which the Buffalo News helped with through their Project Green Leaf campaign.” That effort was largely coordinated by Maurer and Cindy Kincaide, who was the Buffalo News promotional correspondent (now chairman of Buffalo Green Fund). “Now we are established enough to plant our trees properly, meaning we use the right type of trees for specific areas while maintaining ecological diversity.  We have finished with the outlying neighborhoods so now we’re focused on the inner city.”

When asked how he makes this resource accessible to greater Buffalo, Maurer replied, “we have trees to make available to people through their block clubs where that block club can do the planting.  Anyone who wants a tree for their neighborhood simply has to contact us and we’ll get the tree set for you to pick up.” Re-Tree volunteers would oversee the planting as many of them are now highly knowledgeable after their years of planting.

Maurer closed the interview concerned over the future of his work. “We really need to watch it right now with this prolonged drought.  We can’t afford to lose some of the progress we’ve had due to this dry weather, so we have to be sure by reaching out to residents.” Keep an eye on your wildlife. Some very caring people have put a great deal of effort into maintaining its health.

Paul Maurer is an example of what it takes to be a great contributor to the community. All you need is a cause, a desire to do good, and better your surroundings, some helping hands, and in Paul’s case, a whole lot of trees.