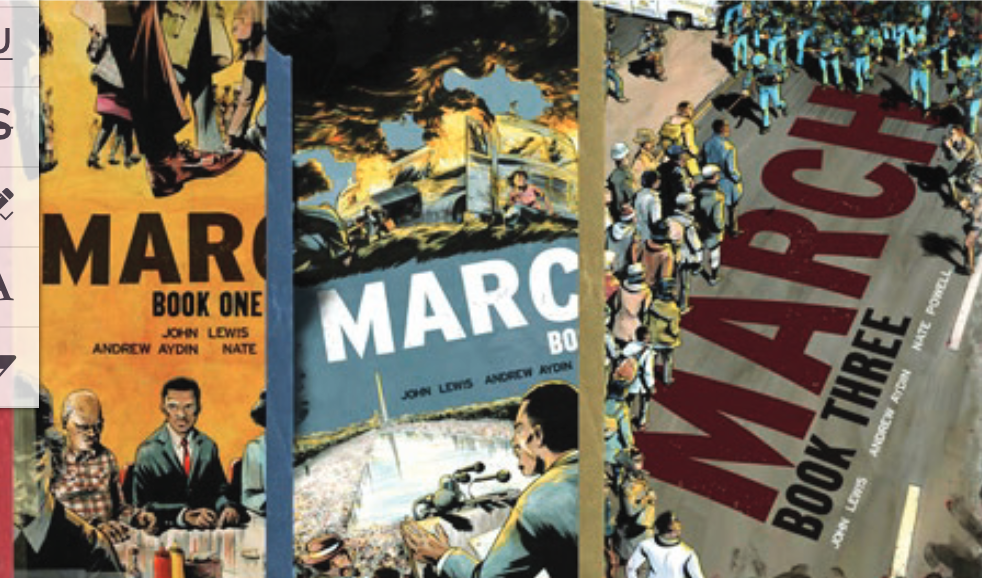 Current events in our nation have proven the concept of a “post-racial America” to be a lie — which, to be honest, is no surprise to the country’s minority communities. Are pol-iticians making racist comments, or merely telling it like it is?

Are police officers becoming increasingly violent, or is it a misinterpreta-tion of the facts? The very nature of “facts” in the modern age is largely dependent upon one’s ideology. Despite it all, we can all agree on one thing: the 1960s were a flashpoint of violent change in the United States. March, the three-volume story of the Civil Rights moment as told by Congressman John Lewis, who lived through it, with the aid of Andrew Aydin and Nate Powell, draws a sharp scalpel through the skin of our reality, puncturing how we’ve perceived the era and allowing the truth of what actually occurred to bleed through.

Hope, fear, rage, helplessness … we see it all through Lewis’ eyes, translated into words by Aydin, and visualized in razor-sharp imagery by Powell. Lewis shows the painful reality of being raised in the South during the 1940s and ‘50s. It was a world where a White man could kill a Black man without fear of legal consequence, where Blacks were powerless under the status quo, and where Black children learned two very important messages at their parent’s knee: “Stay out of trouble.” “Don’t get in White peo-ple’s way.”

These were the messages Blacks learned to heed if they wanted to survive … in a world where Blacks lacked the right to vote, to be properly educated, and the right to live without fear. Lewis relates the names and events of the era as one who survived it. Emmett Till. Brown v. Board of Education. You see the beginnings of the war for racial equality — a war the White rulers of the South have vowed to win by any means necessary, while non-violent resistance becomes the rule for the civil rights activists.

Some readers will find March a difficult read. The fact that the violence in the book is real, reflecting the events that occurred at the time, is painful to consider. The three volumes of March provide a grim, bloody, horrific view into the past. As rendered by Powell, the fear, hatred and abject cruelty expressed by Whites toward Blacks expose the reader to moments hurtful enough to sear the soul — moments that become even more painful once you recall that the events depicted actually happened. Men, women and children actually suffered, were disenfranchised, were killed, all to satisfy the self-love of a single race (or, as others put it, to “protect their way of life”).

Indeed, as Alabama Governor George Wallace vows: “In the name of the greatest people that have ever trod this earth, I draw the line in the dust and toss the gauntlet before the feet of tyranny, and I say segregation now, segregation tomorrow, seg-regation forever!”

Despite how painful it is to delve into the violently racist past of our nation, March is an experience not to be missed. It is educational and revealing — a raw, bitter dive into the truth of history, unfiltered by the more recent trend toward revisionism. The past informs the present, even as many in the present try to ignore the past.

Hopefully, reading March will lead readers to think about what others have experienced, to learn from it, to share that knowledge and use it toward a better future for everyone … and not just a select few.

THEATER | ON THE BOARDS
Night Blooming Cactus by Ryki Zuckerman