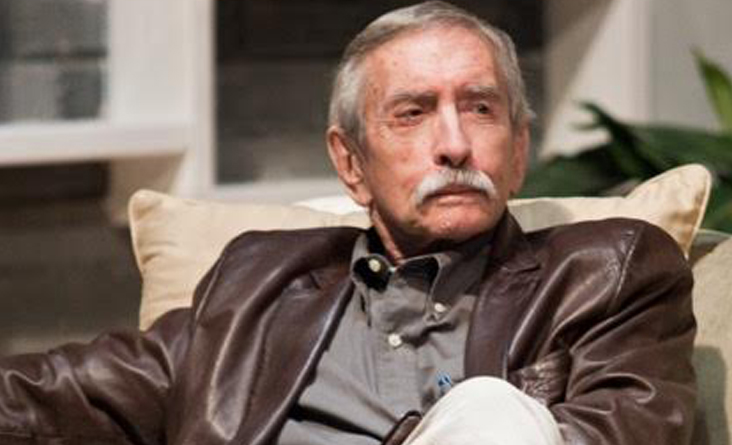 Most of Buffalo’s theater community learned that the great man had died by text message while attending our city’s 35th annual Curtain Up! celebration.  The obituaries were an occasion to evoke every superlative for “the greatest American playwright of his generation.”  Edward Albee had died at the age of 88.

Albee had a significant history with Buffalo.

In the 1960s, his first play after Who’s Afraid of Virginia Woolf debuted at Studio Arena Theatre.  Drama critics from all over the world descended on Buffalo to see Box Mao Box. The following year, Studio Arena opened their 1968-1969 season with Albee’s The Death of Bessie Smith, followed by his The American Dream, and his Box and Quotations from Chairman Mao-Tse-Tung, and a double bill of Samuel Beckett’s Krapp’s Last Tape and Albee’s The Zoo Story.

The bond between Buffalo and Albee was all but forgotten by the time Road Less Traveled Productions invited him to be their visiting “American Theater Master” in 2010.  He attended the opening night of Neil Wechsler’s Grenadine, and then returned seven months later for a four-day visit, to attend their production of his play The Goat, or Who is Sylvia?, and participated in the theater’s gala.

“When he arrived, he was being kind of irascible and remote,” recalls Behrend. “By the time he left, he was entirely upbeat and warm.  I think the turning point was a two hour and forty-five minute Q & A he did with our literary director Jon Elston.  It had gone very well and Albee knew it.  After that, everything was happy.

“I remember when he saw The Goat, we were very nervous, because we heard he had been very critical in other cities.   Stephen McKinley Henderson had told me a story of Albee going to one theater to receive an award, and while he was being honored he stopped to stare at a prop vase of flowers on the set.  Then he said, ‘I can tell how much you value me from the artificial flowers.’ I made sure that the flowers on our set were real!  And I am one-hundred percent certain that he noticed!

“At the end of our performance of The Goat, the entire audience filed out into the lobby, but Albee was nowhere. Finally, Neil Wechsler came out and said, ‘He wanted to speak to the actors.  He wanted to go backstage.’

“’Oh no!’ I thought, but I needn’t have worried.  He loved the show. He told the cast they had been terrific.  He turned to Nathan Winkelstein and said, ‘Now that’s how to play gay!’ It was great.  In the lobby, he told our director, Derek Campbell, that he had done a great job.

“Later, when we went over to the Smith Theatre for the gala, Buffalo State students had done an exhibit of the Edward Albee items from the Studio Arena archive.  Albee was very interested in that.  When he saw the photos of himself at Studio Arena in the 1960s, the first thing he said was that he had been very handsome in those days.  Then he noticed that the captions were wrong.  I went with him all around the room while he corrected the captions on all the photos. He remembered the name of every single person!

For a wonderful interview of Edward Albee on ArtvoiceTV go the following link: