Okay, it’s official. Finding Neverland has been heavily reworked and is a far more efficient and engaging show than you would have seen on Broadway. As you may have read, this show is the first in many a decade to rehearse and begin its national tour in Buffalo – (the first I can think of since William Gillette opened Sherlock Holmes here in 1899!) — bringing huge economic benefits to our city, but also giving us the first look at director Diane Paulus’s vision for the reworked show.

The opening sequence is entirely redone with new music, and gives the show a much more thrilling and economical start. The production qualities look equal to the Broadway experience, and if the audience at the opening night at Shea’s on Tuesday was any indication, people across the country will continue to adore the show that proved to be critic-proof, even in its earlier incarnation. The markedly streamlined show is far more critic friendly.

Finding Neverland tells the story of playwright J.M. Barrie, and how his friendship with a family of boys and their mother, inspire him to write Peter Pan. The show gets Shea’s Broadway season off to a happily robust and crowd-pleasing start, with a compelling and heart-rending story, delightful music, eye-popping sets, costumes, lighting, and effects, and energetic choreography.

At the opening night curtain call, after lead producer, Buffalo native and UB graduate, Harvey Weinstein gave a deliriously happy curtain speech, lavishing love on his show, recalling friends from his college days, and in his euphoria, even making a pitch for the outcome of the presidential election. Director Diane Paulus then seized the microphone and graciously thanked the Queen City for its love and hospitality, thanked her magnificent cast, and enthused that she felt entirely happy with the work they had been able to share with Buffalo first.

Here is some background on the principles of this remarkable cast.w 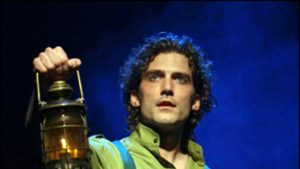 Ask director Diane Paulus about what is most exciting about the national tour of Finding Neverland, right at the top, after the opportunity to make changes and improvements, she will say, “The cast.  We have a first rate Broadway cast, and I am especially happy to see Kevin Kern, who was the standby on Broadway, leading his own company.  He’s earned it!”  Indeed, Kern is wonderful and charming as playwright J.M. Barrie, who befriends a family of boys and their mother at a dry moment in his career, and in so doing, finds the inspiration to write Peter Pan, one of the most beloved children’s stories in history. “I am so excited to be doing the part. I wish I were Tom Cruise, just sitting down waiting for roles to come to me, but the truth is, in the theater, you audition every chance you get, always trying to get that next job. To be lucky enough to get his role is so perfect. It fits my voice really well. It fits my personality.  I have four kids, so this role really speaks to me.  I am so flattered that they think so highly of me and are letting me do this part.” 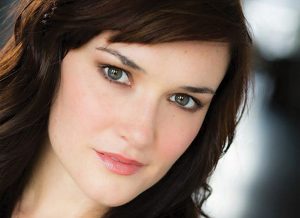 Christine Dwyer will always enjoy the distinction of having been one of the select group of actors who have played Elphaba, the green witch in Wicked on Broadway.  A generation of Broadway fans will include her in their most cherished theater memories. She has been to Buffalo before, having toured here as Maureen in Rent. As her resume might suggest, she’s got one of those soaring voices and uses it to impressive effect in Finding Neverland. “I was in Wicked for a long time.  I started as the understudy, did it on tour for a year, and then was on Broadway for a year.  I also went back when people were injured.  All together, I was with Wicked for six years!  Eventually, I’ll probably play Madame Morrible!” Touring presents a particular challenge for Dwyer. “Every new city has whole new allergens.  I gargle with salt water every day and apple cider vinegar is great!  And then, as soon as I get used to a place, it is time to move on.  That’s the life of a singer.” 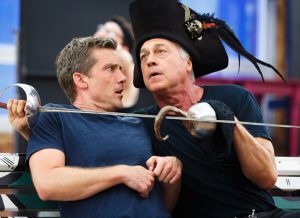 Broadway heartthrob, Tom Hewitt first came to my attention when he appeared at Shea’s in Gigi.  “I was 25 years old, and Louis Jourdan played the Maurice Chevalier role. I played the role he had played in the film. I will forever have the memory of eating chicken wings in Buffalo with Louis Jourdan!  He was the sweetest man.” I would later see Hewitt in the off-Broadway hit, Jeffrey, as the gorgeous boyfriend the title character is afraid to love. His stardom was assured.  He has appeared on Broadway as Captain Newton in Amazing Grace; Komarovsky in Doctor Zhivago; Pontius Pilate in Jesus Christ Superstar; Billy Flynn in Chicago; Dracula in Dracula, The Musical; Frank N Furter in The Rocky Horror Show (Tony, Drama Desk nominations); The Boys From Syracuse; as Scar in The Lion King; and in The Sisters Rosensweig. “I returned to Shea’s in Dirty Rotten Scoundrels, and again in Chicago,” recalls Hewitt. It was fun to be in such a heavy tech show.  There was never a moment when I was not in some kind of contraption. I do enjoy touring. This is such a fun role, and I like the idea of taking the story around America.” 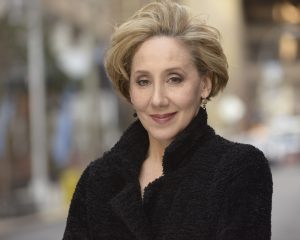 Joanna Glushak is a major doyen of Broadway.  She has originated roles in shows like A Gentleman’s Guide to Love and Murder and The Sweet Smell of Success. She has also been the understudy or standby for such major stars as Bernadette Peters, Christine Barankski, and Patti LuPone.  And Glushak is no stranger to Buffalo, having appeared at Studio Arena in 1989 in a little musical called Galileo by a first-time composer named Jeanine Levenson who would go on, as Jeanine Tesori to compose scores for e Fun Home, Caroline, or Change, Shrek the Musical, Thoroughly Modern Millie, and Violet. She returned in tours of Fiddler on the Roof and Young Frankenstein.  Her other Buffalo connections include friendships with television’s Tom Fontana and choreographer Sam Viverito. Glushak has a glorious voice, an impeccable sense of comedy, and an uncanny ability to look either plain or gorgeously glamourous. Most recently, she appeared in the new musical, War Paint, in Chicago, where she also understudied Patti LuPone as cosmetics titan Helene Rubenstein. “Patti was lovely.  We became friends, and I love her!” Why did she sign on for the tour of Finding Neverland?  “I love the show, and I jumped at the chance to work with [Tony Award winning director] Diane Paulus.  I so admire her work – including her avant-garde work, and I have for a very long time! I’m delighted to be in this show and to be a part of all the changes she is making!” For the record, Glushak has maintained her beauty and her luscious voice. “You have to work at both,” insists Glushak, “but I credit Yale Drama School for my longevity.”