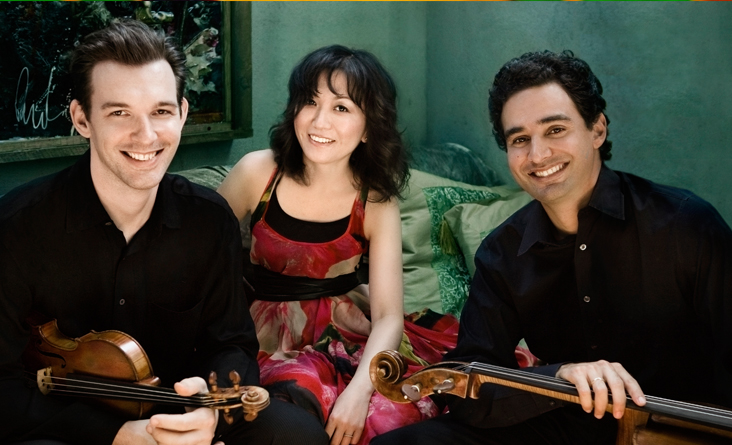 The Buffalo Chamber Music Society gives us a mid-January jewel

Most classical music lovers would undoubtedly agree that perhaps the very greatest music written for chamber ensembles is that large body of works composed for the string quartet. Virtually all the commonly acknowledged great composers in the classical pantheon have felt that they have had to make their contribution to the string quartet genre, a genre invented by Haydn, refined by Mozart, and conquered by Beethoven, who set the as yet unsurpassed standard to which all subsequent composers have been judged.

That is all well and good, but sometimes classical music aficionados enjoy turning to the “other”most popular chamber music ensemble, the piano trio, featuring the violin, the cello and the piano. Okay, so while on the whole, music composed for piano trio is more immediately accessible to the listener (think Haydn, Mozart, and yes, even Beethoven) there are some very much weightier works written for the ensemble (think Brahms, Tchaikovsky, Rachmaninoff and Shostakovich), Yet, sometimes we just need to hear a classical music concert written for piano trio, as we will when the Buffalo Chamber Music Society hosts the very welcome return engagement of the Horszowski Trio to its series in the Mary Seaton Room of Kleinhans Music Hall on Tuesday January 17 at 8pm.

The Horszowski Trio is named for the now legendary Polish born, American virtuoso pianist, Mieczyslaw Horszowski. The trio’s pianist Reiko Aizawa had the unique privilege of being Horszowski’s last student at the Curtis Institute of Music in Philadelphia. Horszowski had studied with Theodor Leschetizky in Vienna, and Leschetizky had studied with Carl Czerny, and Czeny, who published pedological workbooks for piano which are still avidly studied today, had studied with Ludwig van Beethoven.

Classical music lovers of a certain age, may recall a remarkable performance by Horszowski in Slee Hall at the University of Buffalo in the early 1980’s. The 89-year- old Horszowski had just married Bice Costa, an Italian pianist in 1981, his first marriage. His performance in that recital of works from the heart of the classical repertoire exhibited a youthful vigor, combined with a still refined masterful technique, a quality that he managed to share with his last pupil, Reiko Aizawa.

Incidentally, Raman Ramakrishnan, the cellist of the Horszowski Trio, has his own interesting connection, albeit a non-musical one. His father, Venki Raman, won the Nobel Prize for chemistry in 2009. More importantly for concert goers, Reiko, Raman and two-time Grammy-nominated violinist Jesse Mills, who first performed with Raman over twenty years ago, when they both were children, have garnered universal critical praise for their performances. The Washington Post noted that they “played as if they had just received the music from some distant, vast and magnificent reach of the cosmos”, while the Los Angeles Times observed “the Horszowski’s are power players, memorably monumental”.

Their program includes Beethoven’s rarely programmed “Trio Op. 70, No. 2”, last performed on this series in 1986, Mendelssohn’s “Trio in C minor, Op.66”, a work that has at long last perhaps finally started to receive the acclaim that it deserves, as well as contemporary American composer Charles Wuorinen’s “Trio”, a series premiere.

Amahl and the Night Visitors at Westminster Presbyterian

Beginning in 2011 Valerian Ruminski, artisdiretor of Nickel City Opera, made it a priority to present yearly performances on Thanksgiving weekend of Gian Carlo Menotti’s beloved one act opera “Amahl and the Night Visitors”, a Christmas favorite, at his company’s home-base in the Riviera Theatre. His production substituted the theatre’s versatile Wurlitzer organ for a chamber orchestra, with interesting, but less than fully satisfactory results. Last year, a decision was made to restore the production to its original venue, at Westminster Presbyterian, and to schedule performances much closer to the Feast of the Epiphany on January 5th, which the opera celebrates.

As the opera’s music director Matt Marco observed: “Westminster Presbyterian has a long history of finding unique ways to engage the community in worship and with that spirit current choirmaster Garrett Martin suggested that Amahl return in 2016. Presenting Amahl at Westminster dates back to the tenure of Choirmaster Thomas Swan (1976-2001) and was a yearly Epiphany tradition”.

“The 2016 Amahl production was tremendously successful and beloved by both our church audiences and the Buffalo public. We knew instantly that bringing back Westminster’s Epiphany tradition was the right choice. This year, we’ve assembled the finest cast of local singers and creative staff to share Menotti’s opera with local audiences. The cast includes Rochester native Jessica Best as the Mother, twelve year old Ian Torres as Amahl, and Buffalo State alumnus Nick Kilkenny as King Balthazar (all returning from last year’s production). Fredonia alumnus James Judd will sing the role of King Kaspar, and Buffalo favorite James Wright comes home to direct the production, and will share the role of King Melchior (on Friday evening and Saturday) with Fredonia student Brandon Mecklenburg (Friday morning and Sunday). Buffalo State student Shayne Jones will sing the role of The Page, and Buffalo native Matthew Marco will conduct the opera for the fourth consecutive year”. Tickets: $20 adults, available at the door. $50 patron ticket, includes invitation to a champagne and dessert reception on Saturday. www.wpcbuffalo.org.