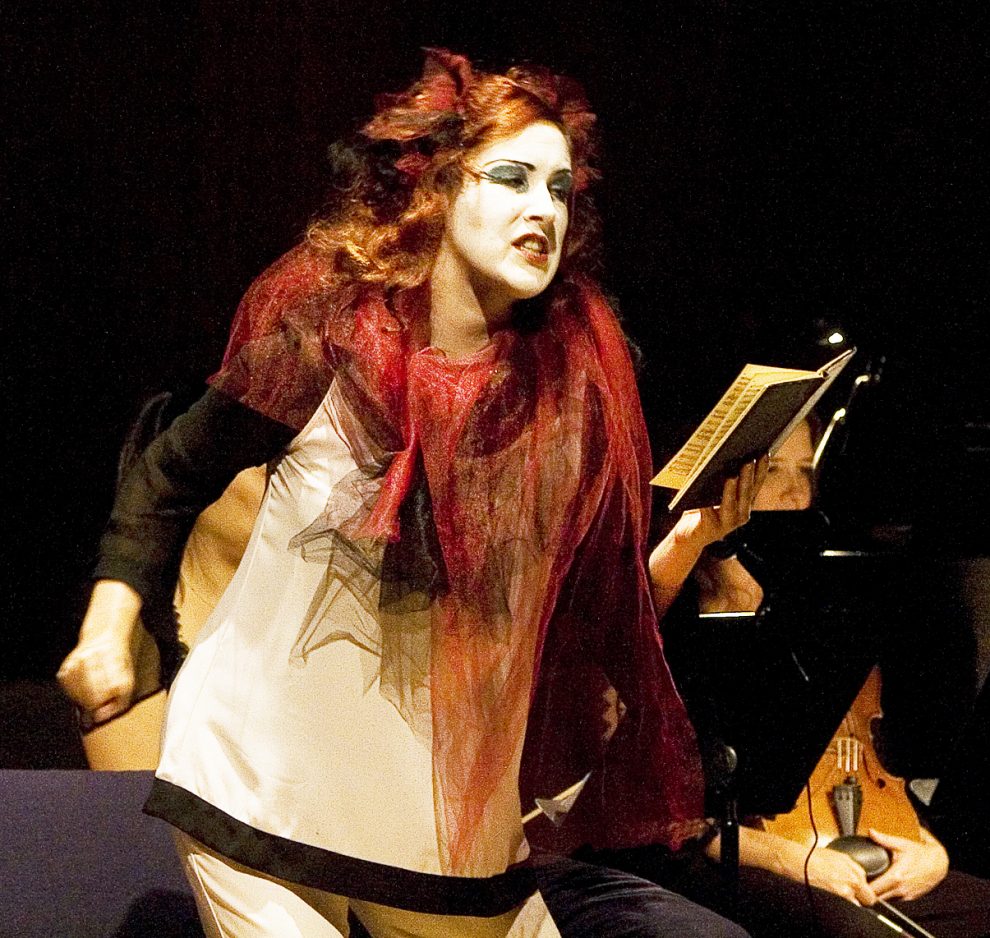 Soprano Tiffany DuMouchelle was appointed director of the voice program at the University at Buffalo in 2015. Her appointment followed the departure of the much-loved soprano Tony Arnold, who left UB to accept a new position in Boston. During her decade plus tenure, Tony Arnold had established a new standard for cutting edge vocal performance, both locally, nationally and even internationally, in addition to developing some very fine vocalists, such as Amanda DeBoer Bartlett, who have since established their own successful careers. As they say in show business, Tony was a tough act to follow.

A year plus later, Tiffany DuMouchelle has proven that she has exactly the kind of talent and imagination necessary to continue and to expand the rich performance tradition of modern and contemporary vocal music for which the UB department of music has earned an enviable international reputation. During this past year, Tiffany thrilled local audiences by her seemingly effortlessly ability to handle the most difficult vocal parts. Tiffany also demonstrated a remarkable stage presence, marked by the highly original physicality of her acting in works as different as Schoenberg’s modernist masterpiece Pierrot Lunaire, and in Justice Arias, a new work by the Pulitzer Prize-winning composer Roger Reynolds that featured her at its world premiere.

On Saturday January 28 at 8pm and on Sunday 29 at 5pm, patrons of the Allen Street Hardware Café will get to experience another side of Tiffany’s vocal artistry when she makes her debut as a cabaret singer.

“I’ve never performed a purely cabaret program before”, says Tiffany, “but have always loved the music of the cabaret genre. Many composers from the classical world also wrote for the cabaret, and so that was how I was first introduced to cabaret: Weil, Satie, Schoenberg. Once I became familiar with singers such as Ute Lemper and Edith Piaf, I was struck by the rawness of their voices and the intensity of emotion in their performances. It’s something I’ve been interested in for years, but apart from performing a few songs here and there, I never had the opportunity to present a program like this. The idea for this project came up after a performance of “Wedding of the Waters” with Friends of Buffalo last August. I was chatting with Mark Goldman and mentioned how I’ve always loved cabaret and would love to put on a show if I could find the right venue; he suggested Allen Street Hardware Cafe, and that was that”.

“To me, cabaret can incorporate quite a few types of music”, Tiffany says, “and perhapsis most interesting when it includes a variety of things. That can be the classic torch song, a satirical number, or something bawdy. The key to cabaret for me is emotion. Whoever performs must makes the piece their own. This sentiment is quite liberating from the classical realm I usually perform in. The text is extremely important and the declamation of the text is allowed a wide variety of declamatory possibilities – speech, belting, subtle inward qualities – whatever the interpreter deems necessary to sell the song, both for meaning and entertainment purposes. My biggest influence is the music of Kurt Weill, but this show includes music from the French cabaret as well as the American Song Book and more modern cabaret songs of Joan Morris and Madeline Kahn. The venue of a cabaret is important too – it should be intimate, so that the intricacies of the performers are not missed. That is why Allen Street Hardware is such a perfect venue for this show”.

“I see cabaret as a natural extension of my career, a reallocation of vocal techniques to different repertoire” says Tiffany. “As a classical singer, the songs of Arnold Schoenberg from the Überbrettl or songs by Bolcom or Weill are popular crossover repertoire. As a contemporary music performer, Schoenberg’s Pierrot Lunaire and the technique of Sprechstimme (a mix between speaking and singing) is closely related to the early cabaret singing styles. I’m quite used to performing in a wide variety of singing and speaking techniques, such as varying amounts of vibrato, glissandi, breathiness, belting. In classical singing, I’m only allowed to use these techniques when a composer specifically asks for them. Here I can use all of these techniques as dramatic colorings in my interpretation”.

Tiffany will be accompanied at the piano by the very active Ron Martin, a pianist, organist and harpsichordist who serves on the faculty of UB, Daemen College and the Buffalo Seminary and who is music director for St. Joseph University Parish and the Fruedig Singers of Western New York.

“Ron and I have been working together at University at Buffalo since I started teaching there in 2015. Although he’s perhaps best known as an organist and harpsichordist, he is also a fabulous pianist and has many years of experience working with singers. At UB, he works as a coach and accompanist for many of our singers. He was as excited as I was about the prospect of this project, and the opportunity to get “down and dirty” in a way we don’t often get to play in our normal performance lives. He’s absolutely fabulous and we’ve been having a blast!”