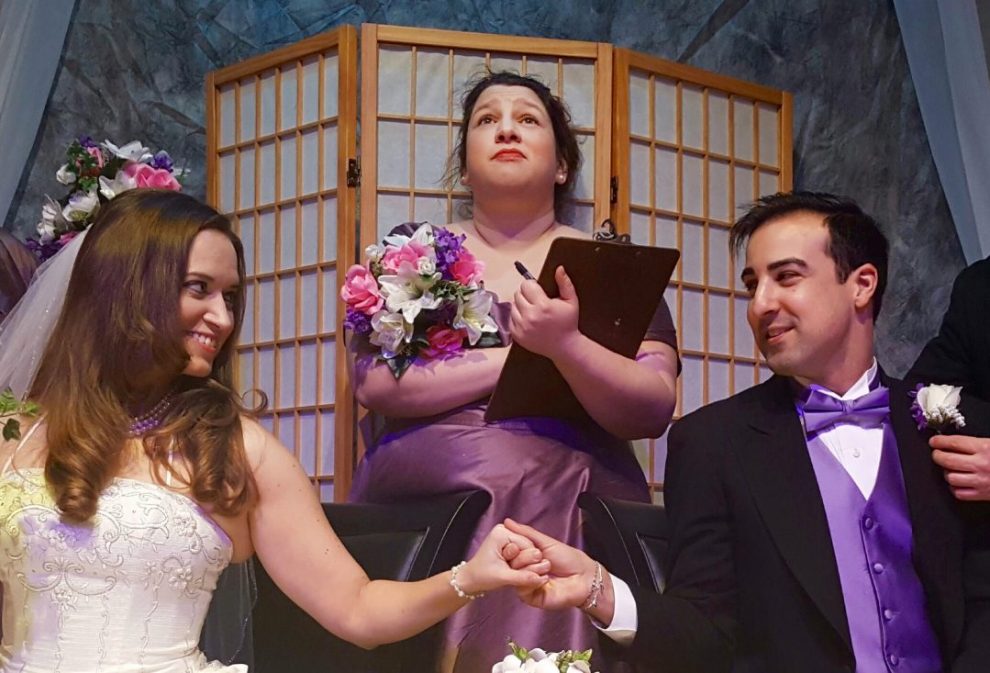 Sára Kovácsi is an actress who has been seen on the stages of Buffalo and Niagara Falls for the past several years.  Her most distinguishing characteristic on stage is her clear and true soprano. Her acting range has helped her land character roles as well as leading roles, both comic and dramatic.  At the moment, she is starring in “It Shoulda Been You,” a recent Broadway musical about a wedding gone hilariously awry at O’Connell & Company.  The charm of the piece is that it takes an old scenario, the clash of cultures that occurs when families from radically different backgrounds come together, and concocts something entirely fresh and surprising.  Kovácsi does not play the bride.  She is the bride’s sister.  But this is the starring role, nonetheless.

The actress graciously answered some questions for Artvoice.

PLEASE TELL ME ABOUT YOUR VOICE.

Music has always been very important to me.  I like to think that I inherited my voice from my mother.  She was singing at weddings for money when she was still in Middle School.  I have been in private voice lessons for 14 years.  The real breakthrough for me came when I started to study with Ellie Seib at Niagara University.  I insisted that I was an alto, because that is what I had been singing in high school, but she said, “No. You’re not.” Working with her, I have really expanded my voice.

Well, for a while I had a lock on the maid roles in Eugene O’Neill plays at the Irish Classical Theatre.  I was the maid in both Long Day’s Journey into Night and Ah Wilderness! I’ve had a lot of wonderful opportunities at Opera Lytes [a company that focuses primarily on Gilbert & Sullivan operettas.]  I’ve also done a number of shows at Theatre in the Mist in Niagara Falls.  That’s where I played Tracy Turnblad in Hairspray in 2015.  That is certainly a highlight.

WHAT IS THE GREATEST CHALLENGE OF YOUR CURRENT ROLE?

Vocally my greatest challenge is, without question, “Jenny’s Blues.”  It’s a big, belting, jazzy, Harlem number – definitely not opera or operetta.  I’ve been working on it for four months, and it has been very rewarding. In terms of acting, it still feels kind of weird for me to be playing the lead. I’m usually the comic relief. I’m Buttercup, not Josephine [the captain’s daughter in Gilbert & Sullivan’s HMS Pinafore]. It has been an adjustment in shows like this and Hairspray, not to be the one who has the funniest lines!  At the same time, it is very gratifying.  In this case, I have a lot in common with my character.  I am glad to say that I didn’t have a mother like Jenny’s, but I have had the experience in my life of being told, “You could have played that role; what a shame you’re so fat!” I have been overweight for my entire adult life.  I am not a delicate flower. I understand her journey.

You get to the point in your life where the opinions of people who would say things like that are just not important to you.  Also, in time, you develop enough positive experiences that you can draw on them.  So much of the theater is about rejection, no matter who you are.  You are always thinking, “I gave terrible audition,” or “Why didn’t I get that part?”  But in time, you think, “Well, that wasn’t my best effort, but next time I’ll do better!”  It pains me to see younger women struggling, because I can remember feeling the way that they do. I can remember looking in the mirror and hating what I saw.  I don’t feel that way anymore.  Playing so many good roles at Opera Lytes did a lot for my self-confidence.  I also think that being in a relationship with someone who likes me, just the way I am, has done a lot for my confidence!  So while I do love being both the comic relief and the lead, it is gratifying to play substantial roles with romantic plot lines sometimes!

WHAT DO YOU ENJOY MOST ABOUT YOUR CURRENT SHOW?

The support of the cast.  It is really a wonderful group.  Every night when we go out on stage, I feel as if nothing can go wrong, because every one of us is out there supporting everyone else. Mary Kate [O’Connell] and Pam [Rose Mangus] are such kind and supportive people.  It’s been five years since I did The Marvelous Wonderettes at O’Connell & Company, and it feels great to be back working with such loving people!

It Shoulda Been You, by Brian Hargrove and Barbara Anselmi, has been directed by Roger Paolini.  In addition to Ms. Kovácsi , the cast features Pamela Rose Mangus as the mother of the bride, Mary Kate O’Connell as the mother of the groom, Adam Hayes as the groom, Heather Reed as the bride, Joey Bucheker as the wedding planner, and Todd Fuller as the groom’s father, with Gregory Gjurich, Bill Group, Mattthew Mooney, Emily Pici, Rebecca Runge and Dan Urtz. Performances continue through February 26th. 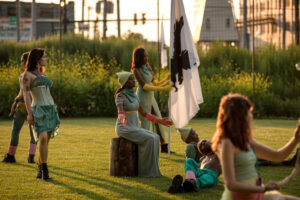 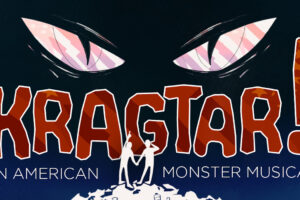 Gentleman’s Guide to Love and Murder at Shea’s by Anthony Chase
ON THE BOARDS: What’s on stage at area theaters