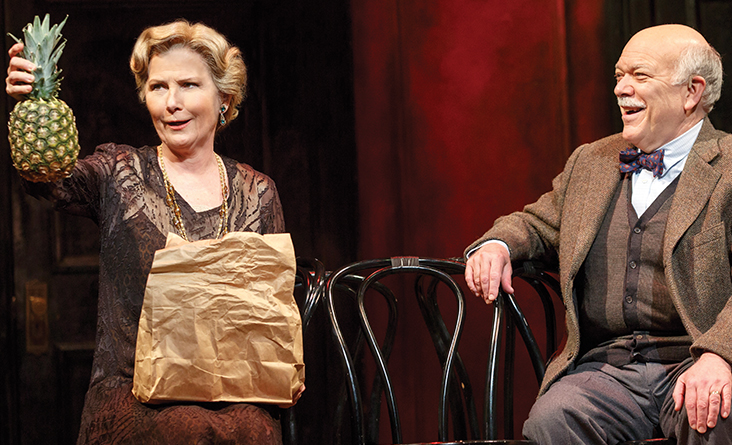 This week, Mary Gordon Murray is coming to Shea’s Buffalo to play Fräulein Schneider, the older German woman with a Jewish suitor in Kander and Ebb’s Cabaret.  I couldn’t be more thrilled!

Mary Gordon Murray first caught my eye in the 1980s.  This “A-list” musical theater actor has a Tony Award nomination to her credit, and in those days, she seemed to be everywhere.  I saw her on Broadway, at the Cleveland Play House, at Washington’s Arena Stage, at Florida’s Parker Playhouse.  She was in A … My Name is Alice in New York.  Later work included The Spitfire Grill, Footloose, and Hands on a Hardbody.

Joanna Gleason may have originated the role, and Emily Blunt may have played it in the film, but for me, the ultimate Baker’s Wife in the Sondheim/Lapine musical Into the Woods will always be Mary Gordon Murray.  I must have seen her do it a half a dozen times!

In 1990, Murray arrived at Artpark in Lewiston, starring as Pistache in Cole Porter’s Can Can. It was a glorious production during a Golden Age of Artpark Musicals, directed by David Saint, who used Murray to spectacular effect  — and who actually got Jack Gilpin to jump onto a café table and bark like a dog during “Come Along with Me.” Even all these years later, whenever I think of Cole Porter’s “C’est Magnifique,” I see Mary Gordon Murray standing in a stunning gown with her head tilted back. I always imagine that song in her voice.

Speaking by telephone, Murray recalls her summer at Artpark, all those years ago.

“I loved that production and I loved that role!” enthuses Murray. “We only rehearsed for something like two weeks, but everything went right. I still remember when David Saint came backstage to show us our review.  It was a gorgeous show. Years later, Sacramento Music Circus was doing Can Can in their season, so I used a song from the show for my audition.  I gave it a full out sexy rendition. They hired me, but not as Pistache. I played Mr. Applegate, the devil character in Damn Yankees!  What does that say? I tried to be as sexy as I could, and they cast me as a man!”

As one of the nation’s iconic Baker’s Wives, it is possible that Murray has played the role of the simple wife of a baker who yearns for a child and has a dalliance with a prince more than any other individual.

“It was getting to the point that if that woman was serious about having a baby, it needed to be in vitro!” quips Murray.  “I did the role in the ‘80s, ‘90s, and after 2000!  I did it on Broadway. I toured.  I did it for Glenn Casale in Sacramento. At first, I was reluctant to do any production other than the original staging. I had done it for Sondheim and Lapine who wrote it, and I replaced Joanna [Gleason] before going on tour. After that, the original staging is kind of in your body, and I didn’t want to be a pain, working with another director. But eventually, I agreed and it was fine.”

“Actually, I had similar concerns about doing Fräulein Schneider in this production of Cabaret,” confides Murray.  “This is really a remount of the Sam Mendes, Broadway production.  I had done the role for Marcia Milgram Dodge at “Reprise” in California years ago.  I was offered this production, and at about the same time, Glenn [Casale] also asked me to do it for him in Sacramento.  I love working for Glenn and I love working in Sacramento, but I was reluctant to do two different productions in the same role, just ten days apart.  But we adjusted, and with a little bit of compensating, and as much of this version as possible, Glenn made it very easy for me. Luckily my role is kind of the linear part of Cabaret and doesn’t change much from production to production. For Cliff or Sally it would have been more difficult!”

I may be a diehard Mary Gordon Murray fan, but it turns out that I was oblivious to a huge part of her career than might be very familiar to many Shea’s patrons.  Playwright Donna Hoke, Western New York representative for the Dramatists Guild, used to write for “Soap Opera Digest.” When I mentioned to her that Murray was coming to Shea’s she excitedly told me that Murray used to be on a soap!  From the late 1970s until the mid 1980s, Mary Gordon Murray played “Becky Lee Hunt Buchanan” on the ABC daytime soap opera “One Life to Live.”

The character has special meaning for many viewers, especially in the South, because Becky Lee was a Southern character at a time when there were very few on television.

“It was right after ‘Coal Miner’s Daughter,’” recalls Murray. “Becky Lee was a country western singer modeled on Loretta Lynn.”

Others may also recall Murray from a three-part “Quantum Leap” in which she played a psychopathic killer.  “That was fun and very memorable,” she notes.

For the next week, however, Mary Gordon Murray’s storied and varied career will bring her to Buffalo, where she will play the beleaguered owner of a boarding house who must make a painful decision in one of the greatest American musicals every written, Kander and Ebb’s Cabaret.