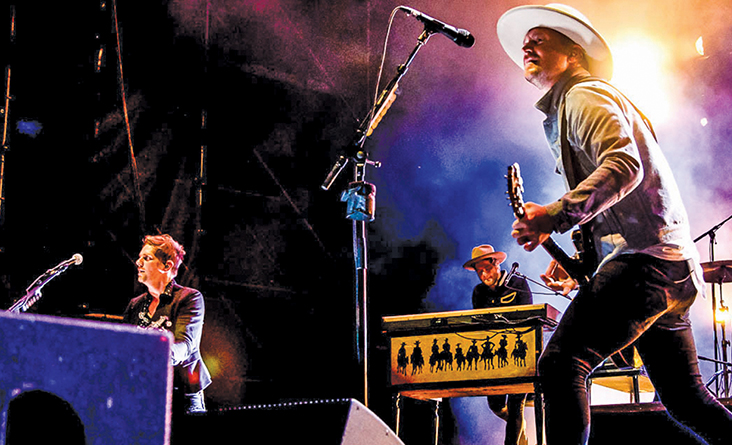 While many have trekked to the Rapids Theatre to hear various hardcore, metal, rock and ska bands, the Rapids has something quite different this week. The South Carolina band Need to Breathe is a rock gospel band with a barrel load of Gospel Music Association awards over the past decade for Best Album, Best Group, Best Song, Best Performance, etc. Their last album “Hardlove” released in the summer of 2016 and debuted at #1 on the Billboard Top Rock Albums, Top Current Albums, Top Christian Album and Top Alternative Albums Charts and #2 on the Billboard 200. This is the third time the Christian rock band’s album debuted at the #1 spot on Billboard. That’s a lot of crossover appeal.

Need to Breathe sound like U2 meets Creedence Clearwater and the Staple Singers. Their South Carolina sound has evolved with the “Hardlove” album injecting bursts of electronics and swampy soul into its usual classic-southern-modern rock cross section.  While the band has always prided themselves on their southern roots and backwoods swampy sound, from the very first distorted reverb of Hardlove” it’s obvious we’re not in the backwoods any more. Banjos, mandolins and steel guitars take a back seat to colorful synths and electric experimentation.

“The different direction was definitely intentional,” Bear told music writer Linday Williams. “We’ve always felt like we made soul music. If you go back to ‘Washed by the Water’ and ‘Lay ‘Em Down,’ it felt like that. There was always that vibe, but how do we get more modern with that style?” They answered that question with “Hardlove.”

The band is exceptionally tight, probably due to their relentless road touring over the past decade. The four-piece band includes Seth Bold (bass), Josh Lovelace (keys) and brothers Bear (vocals, guitar, piano) and Bo Rinehart who were raised in the small town of Possum Kingdom, South Carolina and began their career playing in coffee houses around Furman University where Bear played football, winning the trophy for South Carolina Football Player of the Year in 2002.

While Need to Breathe unquestionable rocks it they are serious about their Christian message. They’re not writing songs about girls with big butts or packing a gun. In fact, a lot of songs are written as if Jesus were singing. Examples of some of their lyrics:

Come to the fountain and
You can be satisfied

There is a peace, there is a love
You can get lost inside

Come to the fountain and
Let me hear you testify

Ramblers in the wilderness we can’t find what we need

We get a little restless from the searching

Get a little worn down in between
…

When the night winds are driving on

Be the one to light the way
Bring you home

If you could soldier on
Headstrong into the storm

I’ll be here waiting on the other side

Don’t look back
The road is long

“We’re just incredibly inspired right now and excited about playing on the road,” said Bear. “I feel like this record is going to change a lot of things for our band, even though we’re completely comfortable with the success level the band is at in our career. We don’t need it to be anything more.”