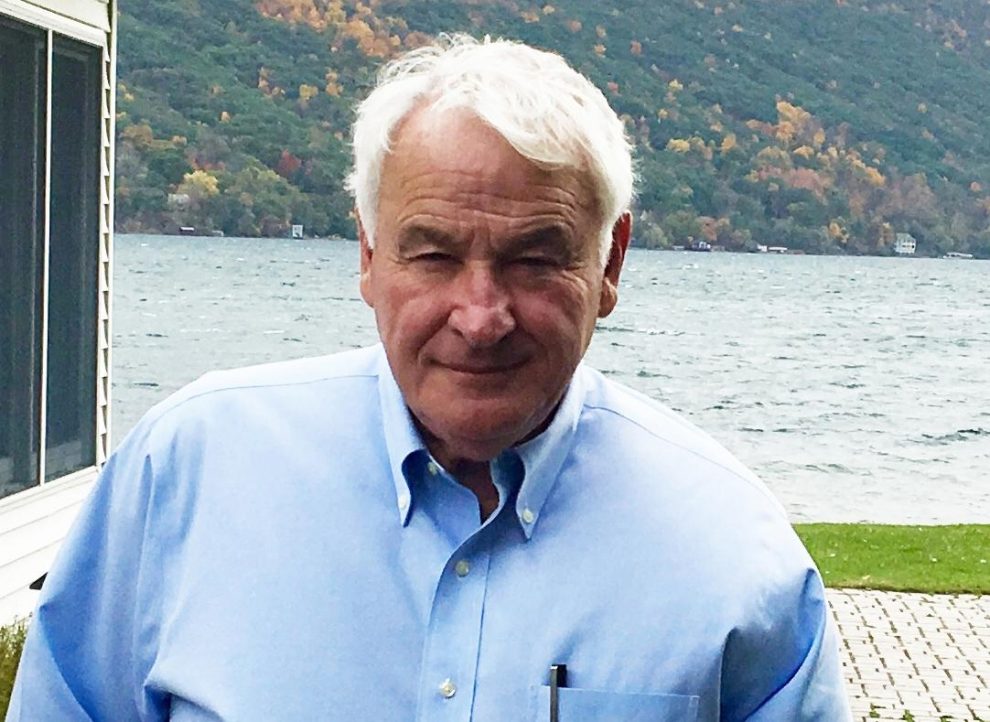 Canada geese at the heart of the problem.

Tom Golisano, the founder of Paychex, has a net worth estimated to be more than $3 billion. He is the 264th richest man in America, according to Forbes.

He has a mansion in Naples, FL, a mansion near Rochester, NY, and a summer home in the Finger Lakes region of western New York, in a town called South Bristol, population 1600.

Golisano spends a few weeks during the summer in his home in South Bristol. At 2,900 square feet, compared to his mansions, his summer home might be called a cottage – though to others it might be deemed a substantial residence.

His property sits on the shore of Canandaigua Lake; its assessed valuation is $5.5 million. In South Bristol, with its high tax rates – Golisano pays $132,000 per year in property taxes – which is high compared to nearly every property of like value in the nation.

What stands between Golisano and his quiet enjoyment of his property are about 200 Canada geese who have taken year round residence on the lawns and his 850 feet of shoreline along Canandaigua Lake.

The Canada goose, which was all but extinct in the 1950s, has made a comeback. In so doing, some of them no longer fly back to breed in summer in sub artic Canada as their ancestors did for 10 million years.

The Canada goose has become successful at living in human-altered areas. The grass, the lake and absence of predators at the summer home of Tom Golisano is perfect for their needs.

Eating his grass, honking at odd hours; watching them couple – Canada geese mate for life; they are monogamous creatures – more so than your average billionaire – splashing in lake waters, incubating eggs, molting, leading their goslings, watching them approach in V-shaped formation, then coming down to land – about 200 – on his lakefront property – all of this is a spectacle to behold. Something some might consider quite thrilling.

Everything is beautiful about this except for one thing: The accumulated excrement of waterfowl which is called ‘guano.’

Canada geese defecate 30 times a day, leaving an average 2 pounds of guano per day per bird.

For a flock of 200, that’s 400 pounds of fresh guano daily laying in small moist bullets, added the the 400 pounds of yesterday and 400 more from the day before.

Up to 2800 pounds of guano a week, covering almost every inch of lawn, patio, walkways, splattering on windows, windblown against doors and welcome carpets and on the rooftop of the summer home of Tom Golisano.

Even if the enormous quantities of guano were somehow bearable in return for the splendid beauty of the geese, it is unsafe to reside near it or clean it regularly – not hundreds of pounds per day. [To clean it requires hazmat suits]. For guano contains pathogens, parasites, bacteria, [chlamydiosis, e-coli, listeria, pasteurella multocida and salmonella] viruses and fungus [cryptosporidium, giardia and toxoplasmosis.]

The geese are fine amid their guano, but for humans, they make any property including Golisano’s unhealthy and uninhabitable.

The problem is not as simple as getting rid of the geese and cleaning up the guano.

Golisano does not own the geese, [although by right of possession, he likely owns the guano.] Canada geese are protected from hunting and capture by the U.S. Migratory Bird Treaty Act.

200 Canada geese who have in fact lost their migratory habits, have made the Golisano summer home their sanctuary and unless he can persuade them to leave peaceably, there is nothing he can do but let them squat on his land.

He has tried. As the Associated Press reported, “Golisano tried to get rid of the geese by stringing up fishing line, spraying repellent and posting a wolf decoy, but the Canada geese turned the lawn of his lakeside home into a ‘minefield of poop.’”

After Golisano, who by law cannot kill them, was unable to scare them away, he went to government to ask for help.

South Bristol’s Town Supervisor, Daniel Marshall declined to help. He told the Associated Press, “It’s a resident’s problem to take care of, not the town’s. It is a lake, after all.”

New York’s Department of Environmental Conservation agreed. While admitting the state has an overpopulation of Canada geese, according to the AP, the DEC say,  “nuisance wildlife on private property isn’t the responsibility of the municipality.”

True, the DEC added, if it’s a community-wide problem, local officials may want to hire a “goose control officer” and devise a control plan.

But Supervisor Marshall says no one else is complaining about geese – which could be because Golisano has the most inviting property for them to live on – and this has become their habitat.

Golisano’s response to the town’s decision that this was his problem decided to withhold a $90,000 school tax bill due last September.

He said he planned to seek a reduction in taxes. His withholding of payment was to make a point: This is principle, he said. Not the money.

Government won’t help solve the problem. His property is now unusable. They are charging him as much or more than any homeowner in South Bristol.

In fairness, they should reassess his property to reflect the value caused by the enforced occupation of 200 geese and their guano.

At some point along the way, the media got wind of the conflict. “Poop” is a word not often used in headlines combined with the word “billionaire”.

But that’s how the headlines played out:

Jezebel: Billionaire to Geese: Stop Pooping Near Me

Vanity Fair: Who Will Save This Upstate New York Billionaire from All This Goose Poop?

The media put a rather comical spin on the story, possibly because of the general lack of sympathy they know their readers [and they themselves] have for billionaires.

As one media outlet put it, “Birds going No. 2 is this billionaire’s No. 1 problem.”

While Golisano merely stated a fact: “You can’t walk barefoot, can’t play Frisbee, can’t have your grandchildren run around. … Here I am paying all this money in taxes and I can’t use my property because of the geese droppings”…

Vanity Fair spun this as “Golisano is refusing to pay $90,000 worth of school taxes on his home in upstate New York because he can’t play Frisbee in his yard. The geese, they won’t stop defecating on the pitch.”

It may not be entirely fair to compare Golisano to Scrooge. It might be argued that his withholding $90,000 has little to do with the money and could be just as he says it is: a matter of principle.

Based on published reports, and some extrapolation, Golisano makes at least $60 million a year from his dividends of Paychex stock.

Based also on published reports, the average journalist in the USA makes $46,000 per year.

But there is more:

As further evidence that the amount being withheld is truly a token sum for Golisano, consider he has donated $270 million to charities in this century.

Here are some of his donations.

Golisano is withholding $90,000 and is simultaneously pointing out that Western New York – where his property sits – has the highest property taxes in the U.S. compared to the value of houses, even without guano making them effectively worthless.

Out of 217 regions in the U.S. with populations exceeding 200,000, the areas surrounding Golisano and his summer home are the highest. Binghamton and Rochester rank first and second in tax rates, according to a 2017 report from ATTOM Data Solutions. Syracuse was fifth

His point, is one of inequity.

A Catch 22: With declining upstate population, more tax burden falls on those remaining. But, “If our taxes were lower, our property values would be higher,” Golisano said.

What started with an unwillingness of local government to help, combined with their inability to stop taxing the guano out of locals, Golisano began with a plan for an assessment challenge.

His summer home is not worth $5.5 million any more, he claims, with 400 pounds of guano dumped on it daily.

From there – now that he got started – his scope of action enlarged, as he studied the issue, to considering filing a lawsuit, against local taxing authorities, on behalf of other homeowners in this highest taxed region in the nation.

“A lot of people are suffering significant injustice because of the assessment system,” he said.

[Speaking of injustice, notwithstanding that Golisano is probably the highest taxpaying property owner in the town of South Bristol, because he does not reside their fulltime, he cannot vote on school and other local budgets which is in effect taxation without representation.]

This kind of fight is not new for Golisano.

It cost him $200,000 in legal fees but it did not take long for him to recoup that investment.

He challenged the assessment for his daughter’s home in Victor resulting in her taxes being reduced from an exorbitant $100,000 to a more fair [but still high] $40,000 in annual taxes.

As a further result of his being goosed by local government, he launched a website: TaxMyPropertyFairly.com designed to help ordinary taxpayers fight over-taxation. The website provides information – the tools to challenge unfair property tax bills without going into debt.

At some point it should be noted that Golisano  doesn’t have to do this. He could just leave the area, since the geese won’t.

After running three times for governor – on a platform in part that New York State was losing its battle in the competition among states for business and prosperity because of its high taxes, he left New York as a permanent resident.

Predictably, as an independent, he could not win from a minor party line – although his races brought forth many issues that now confront New York State.

New York continues to be one of the highest taxed states with the fastest shrinking population.

In 2009, Golisano, accepting the will of the people – they voted for tax and spend governors –  changed his legal residence from New York to Florida.

Who can blame him?

It seems ironic and strangely apropos of our socialistic times that the very left-leaning Jezebel.com cast this inequitably snarky shadow upon Golisano in describing the dispute:

“It’s a relatable tale of incredibly wealthy man versus animal poop: geese have been pooping all over the Finger Lakes property of billionaire Tom Golisano and he’s not happy. As expected, animal poop is prevailing, so Golisano thinks someone should pay. Who? The children.

“… Can you imagine the burning rage experienced by a billionaire who can’t pay off 100 to 200 staring geese, pooping at their leisure? How they mock him with their beady eyes, before lifting a wing and taking a squirt; as though to say, ’You can’t take your money to your grave, on which we will also poop.’ How do they DARE!!!”

Meantime, let us recap this adventure.

The best recommendation anyone in New York can come up with is for Golisano to keep his distance – for health reasons – from the geese – in other words stop using his house, but still pay the high taxes.

He could donate $5 million less next year to some New York hospital or New York university and buy another summer home in another state where they might choose to represent him.

As for the media, lifting their wings and taking a squirt on him; as if to say, “You can’t take your money to your grave, but my purple prose will live on long after I take my final poop”, one is only left to admit they might be right, or, then again, they might be full of guano.