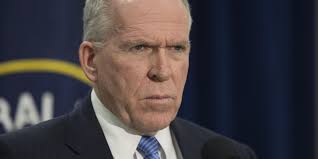 There can be no doubt that John Brennan is, at minimum, a very shady and malevolent character.

But, even worse, as recent revelations are beginning to prove, Brennan is a criminally-manipulative partisan sycophant. He has abused nearly every power of his position as director of perhaps the most powerful, and historically-lawless, agencies of the federal government. He did this in service to a seditious conspiracy intent on illicitly-securing the election of his preferred candidate for President of the United States by fraudulently-framing her opponent with perhaps the most grave offenses that can possibly be levied against any person seeking public office at any level in this country.

When Brennan’s and his co-conspirators’ plot to smear and defeat his political matron’s opponent failed spectacularly in the greatest upset in American political history, a now-embittered and politically-unrestrained, if not unhinged, Brennan maliciously set about poisoning the well and salting the fields to undermine the incoming president and his administration.

Brennan did this by systematically and purposefully disseminating the defamatory contents of the sleazy, Clinton-purchased “dirty dossier” to official Washington and numerous sympathetic media mouthpieces during the transition period and beyond, ensuring their continued proliferation, compounding the damage Brennan hoped and expected would result from his calculated treachery.

Brennan was even so brazen as to attach the dossier’s contents to an official daily intelligence briefing provided to the outgoing president just weeks before the inauguration of the president-elect.

He also persisted in pressing Congressional leaders to launch expansive, disruptive investigations targeting the president and his team.

Being highly-practiced in the art of diabolical backstabbing, Brennan knew full well that the murky, outlandish nature and wide-ranging subject matter of the fake dossier’s contents would only serve to complicate, prolong and ultimately thwart the orderly expeditious resolution of any good faith investigative effort undertaken by any official body, especially those impacted by the cumbersome demands of dealing with classified materials. (See e.g. the “FISA memo” saga.)

That his deceitful, underhanded scheme would falsely divert public resources and distract official efforts and public attention, costing hundreds of thousands of lost manhours and tens of millions of dollars, fruitlessly chasing down a sordid fraud, is not just of no consequence to Brennan, it is what he intended.

To this day, the dossier’s contents remain almost entirely-unverified for the simple reason that falsehoods and fabrications are incapable of ever being verified, at least by any standard that would be the minimum applied by any law enforcement or intelligence agency, or at least one not tainted by the criminal corruption of a lawless agency head.

Perhaps the most vile aspect of Brennan’s ruthless political jihad against our democracy, seeking to undermine a quadrennial national election by which we choose our president, lies in his motives.

Brennan did not run around splattering our national political life with gutter-grade filth and Clinton-grade lies in service to some higher purpose or noble patriotic impulse. Not in the slightest.

Just like his petty, vain, manipulative Obama administration crony, the worse-than-a-woman-scorned James Comey, this degenerate megalomaniac Brennan did it all, first out of borderline-psychotic desperation to preserve his power and position atop America’s near-omnipotent intelligence infrastructure.

Brennan fully-expected, and was valid in his expectation, that Hillary Clinton would have retained him as CIA Director, had she been elected president.

Having failed to achieve this first and only motivation for his miserable existence, Brennan then persisted, in the second place, out of seething, now-undeniably-psychotic bitterness over his now-ended career, matched only by his almost-satanic lust to wreak destructive vengeance on the man, and the movement, that denied him the power he has so unequivocally and despicably demonstrated that he believes to be his divine right.

John Brennan is an evil, repugnant criminal on par with our nation’s most righteously-reviled villains and monsters.

If there is any justice in this land, John Brennan will spend the rest of his grotesque blighted existence locked in a windowless concrete cage somewhere halfway to the center of the earth.

ON THE BOARDS • Week of March 22- – What’s Playing on BUFFALO THEATER Stages
Government spending is the bread and butter of Democratic politics,
Comment