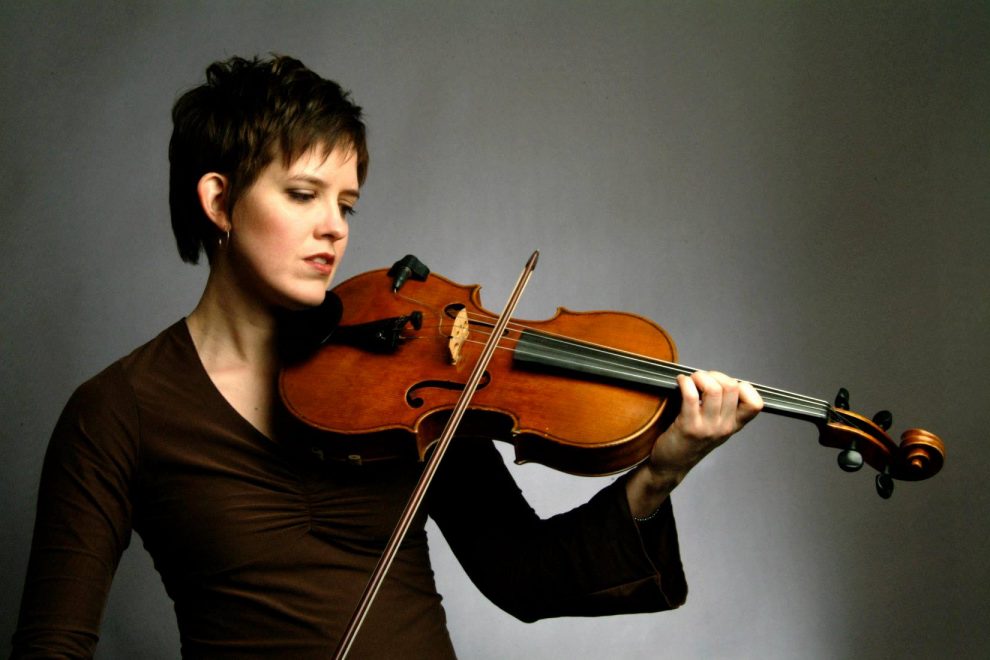 On Friday, April 20, 2018 at 7:30pm in Baird Recital Hall on the University at Buffalo Amherst Campus, violist Leanne Darling will be joined by pianist Ivan Docenko, cellist Jonathan Golove, percussionist Liz Holland, guitarists Conn Sullivan and Thane Wilcox, and multi-instrumentalist Helen Yee, who will be performing on the yangqin, or Chinese hammered dulcimer, for a program titled “Viola Around the World: A Musical Journey”.

Even though Mozart himself always chose the viola whenever he played in chamber music ensembles, for most of its long life the viola has endured something of an identity crisis in the world of Western classical music, as Leanne Darling explains: “As a solo or featured instrument, violists’ repertoire choices are limited. In western classical music, not counting the last one hundred years, it has been overlooked as a solo instrument, and often violists have borrowed from like instruments such as the cello or clarinet to represent music from before the 20th century. In other cultures, however, viola-like instruments are prominent in many musical genres. The bowed instruments like the Chinese erhu and the Egyptian rebab are very much in the viola register and they can trace their origins back hundreds, if not thousands of years”.

“It is my aim with this recital to showcase how versatile the viola is in adapting to these world music styles, whether taking on the sounds of the cello, or the erhu, or playing a blues or a tango. The repertoire in this recital covers five continents and musical influences from numerous countries, beginning with European classical music, jumping far afield to Asia, back via the silk road to Egypt and the Middle East, bouncing across the ocean to America and then down to South America for an Argentinean Tango.”

Darling will begin her recital with one of the masterpieces for solo instrument, the Suite No.4 in E-flat major, BWV 1010, written by one of the very greatest of all composers, Johann Sebastian Bach. Although Bach composed his six solo suites for the cello, violists have enjoyed a long, successful history of playing these works on their instrument, which sometimes comes as a very pleasant surprise to first-time listeners used to performances on the cello.

The program begins its world-music explorations with Moon Reflected in Erquan, originally written by Hua Yanjun for yangqin and erhu, in an arrangement by Helen Yee for yangqin and viola. Darling serves as her own arranger for the improvised Jamil ‘Awiss for Viola Taqsim based on Sema’i Nawa Athar. Darling’s specialty is composing original material for solo amplified viola and loops, but she will offer a performance of a work by a fellow composer in the genre, the Viola Split for solo viola and loops, by Jennifer Griffith. Closing the program, Darling pays homage to Argentine composer Astor Piazzolla, the late master of Nuevo Tango, with that composer’s Le Gran Tango.

Violist/Composer Leanne Darling is currently an adjunct professor of viola at SUNY Buffalo and head teacher/mentor at Buffalo String Works. A classically trained violist with degrees from the Eastman School of Music and the Cleveland Institute of Music, Darling was assistant principal viola with the Florida West Coast Symphony and the Missouri Chamber Orchestra. In 2001 she moved to New York City where she studied with jazz violinists Julie Lyonn Lieberman and Rob Thomas, and classical Arabic music with virtuoso oudist/violinist Simon Shaheen and Bassam Saba. While in New York Darling collaborated with Cedar Lake Dance Company, and poets Robert Bly and Clarissa Pinkola-Estes as well as numerous other dance and theater companies. In 2008 she founded the genre breaking string trio Trio Tritticali, an eclectic rock/jazz/world group for whom she composes and arranges. She received two Meet the Composer grants and won the New York Innovative Theater Award for best original music in 2007. A prolific arranger for strings, Darling’s Arabic composition Isma’a for middle school orchestra has been published by Alfred Music. Darling’s specialty is composing original material for solo amplified viola and loops. She released a solo CD Spiral in 2007 containing all original looping compositions, and since moving to Buffalo has performed at Pausa Art House, the Elmwood Avenue Arts Festival, Hallwalls, Villa Maria College and the Music is Art Festival.

Helen Yee will present an hour-long lecture-demonstration on the yangqin, or Chinese hammered dulcimer, on Wednesday April 18 at noon, in Baird Recital Hall. This session is free and open to the public.