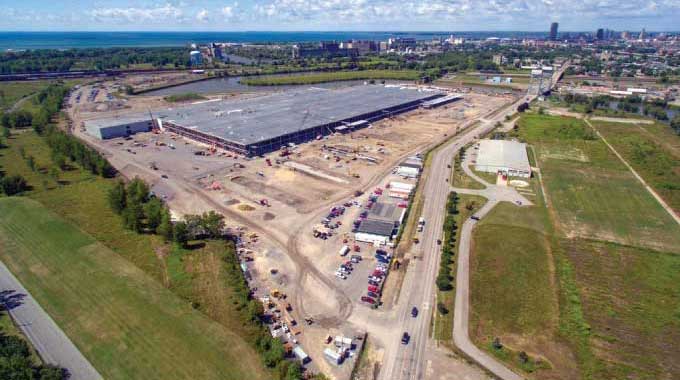 The carpenters, all 70 of them, are back on the job at SolarCity, but more than 120 plumbers were still out as of Tuesday as the state scrambled to make $82.5 million in late payments to contractors who hadn’t been paid since October on the much-hyped Buffalo Billion program.

The carpenters, all 70 of them, are back on the job at SolarCity, but more than 120 plumbers were still out as of Tuesday as the state scrambled to make $82.5 million in late payments to contractors who hadn’t been paid since October on the much-hyped Buffalo Billion program.

Empire State Development and the State University of New York Polytechnic Institute said in a joint release Monday that the payments are being processed and were slated to be delivered as early as Tuesday, our press deadline.

For some reason, the state fell behind paying its hand-picked project developer, LP Ciminelli, and other contractors working on the massive South Buffalo SolarCity project at Riverbend, causing some workers to be pink-slipped as contractors were running out of money. “We’re close to getting the money,” said an official for one of the contractors who declined to speak on the record. The official said he expected everything would be caught up by the end of the week.

The news of the state falling months behind on paying contractors on the project that is supposed to create 3,000 jobs came on the heels of negative stock news on SolarCity earlier this month raising concerns in some investment circles about the solar installer’s financial picture. SolarCity’s stock was once nearly $86 a share but has fallen nearly 30 percent and the New York Times noted that rooftop solar providers like SolarCity were once the darlings of Wall Street “but in two years, the landscape has drastically shifted,”: said the Times story on Feb. 10.

The story continued: “Nevada recently rolled back the generous support it gave rooftop solar systems; 20 other states are rethinking their policies as well. And despite the extension of an important federal tax credit last year, losses by rooftop solar companies have accelerated.”

According to the Times analysis, SolarCity, the largest provider of rooftop systems, is but the most visible of a cluster of companies, built with the aid of government subsidies and utility incentives, now facing deep uncertainties despite unflagging consumer interest and surging growth in renewable energy. And despite the extension of the federal tax credit, mounting losses and increasing competition led SolarCity to cut its growth rate in half last fall.

There’s a lot riding on the Buffalo Billion’s $750 million investment at Riverbend on the $900 million SolarCity project, and despite concerns about the industry, Gov. Andrew Cuomo said earlier this month after SolarCity’s stock plunge that “solar is the right place to be.” He told editors of the Buffalo News “there is no undue concern.” But now, just a few weeks after the stock fell, word comes out that the state is behind several months in paying contractors.

Perhaps Cuomo is right about “no undue concern,” but one has to believe he cannot be too happy that his bureaucracy fell behind more than four months in paying contractors on his signature project as news of the solar giant’s financial troubles came to the surface. There is little information from government agencies about what happened, only brief statements that everything is going to be fixed and the money will be flowing again soon. But how did it get to that point? If this project has so much support from the state, why wasn’t somebody watching? Unfortunately for the public, many of these agencies do not operate in a transparent fashion and how they manage the public’s money is pretty much a well kept secret.