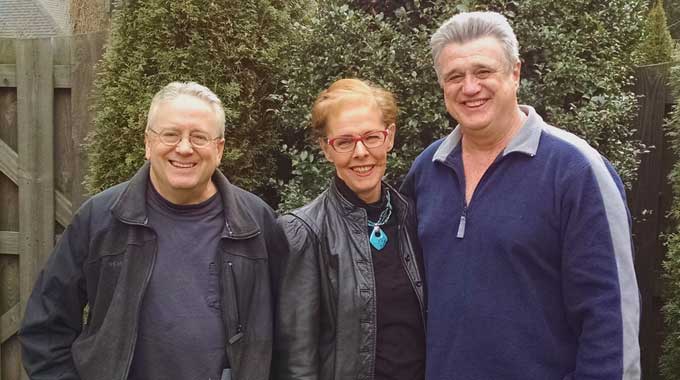 The Friends of Vienna resumes its long-running chamber music concert series on Sunday, March 13 at 3:30pm in the Unity Church at 1243 Delaware in Buffalo. BPO principal clarinetist John Fullam along with his BPO colleague cellist Robert Hausmann, and UB pianist Nancy Townsend, who together make up the Amberg Ensemble, will get together for an afternoon of new, and rarely programmed works, highlighted by the premiere performance of a new work composed for the group by Persis Parshall Vehar, a multi-award winning composer long resident in Buffalo

The Friends of Vienna resumes its long-running chamber music concert series on Sunday, March 13 at 3:30pm in the Unity Church at 1243 Delaware in Buffalo. BPO principal clarinetist John Fullam along with his BPO colleague cellist Robert Hausmann, and UB pianist Nancy Townsend, who together make up the Amberg Ensemble, will get together for an afternoon of new, and rarely programmed works, highlighted by the premiere performance of a new work composed for the group by Persis Parshall Vehar, a multi-award winning composer long resident in Buffalo.

John Fullam and his friends enjoy an enviable reputation for putting together classical music programs that avoid the overly familiar, while still managing to be very listener-friendly, and this recital is no exception. Fullam met the pianist and arranger Paul Rosenbloom over thirty years ago, when performing in Caracas, Venezuela, and they have shared a close, working musical relationship ever since. Rosenbloom, the principal keyboard player for the Rhode Island Philharmonic and the artistic director of the chamber group Musica Dolce, has made arrangements for clarinet, cello and piano, of a pair of popular works, originally written for the piano by Robert Schumann and Claude Debussy. Toccata for Clarinet, Cello, and Piano is Rosenbloom’s transcription of a movement from Debussy’s popular, multi-movement work Pour le piano.  Working on a larger scale, Rosenbloom also transcribed five movements from Schumann’s Album for the Young, op. 68, which he titled his Suite No. 2 for Clarinet and Piano.

The vast output of the late-Romantic Bavarian composer Max Reger (1873-1916) is still relatively unknown on this side of the Atlantic. Reger continued to compose huge amounts of chamber music throughout his short life, and it was somehow appropriate that his final completed work was the Clarinet Quintet Op.146, demonstrating both his long-standing love of the instrument, and his ability to write successfully for it, qualities already in evidence in his earlier Romance for Clarinet and Piano. Ernest Bloch composed the three pieces of his From Jewish Life in 1924 , for cello and piano, in 1924, for Hans Kindler, the principal cellist of the New York Philharmonic, who had  previously given the successful premiere of Bloch’s best known work, his Hebraic Rhapsody for cello and orchestra, Schelomo, about which one musicologist has noted: “The overall atmosphere is one of intense sadness and introspection, and the series is concerned far less with virtuosity than with the peculiar power of expression that invariably distinguished such archaic and timeless themes as Bloch chose to employ in this work”.

Hailed by the New York Times for her musical “honesty, clarity and compositional skill”, longtime area resident Persis Parshall Vehar is one of the most successful and awarded composers in Buffalo’s history, with over 300 published compositions many of which have been performed in leading concert halls in America and Europe. She is also the recipient of 30 annual ASCAP Plus Awards for excellence in composition and seven Meet the Composer Grants. Nickel City Opera will present the world premiere of Shot!, her new opera which deals with the assassination of President McKinley in Shea’s Performing Arts Center this June. The composer will be present on Sunday for the world premiere of her new work, Endlessness, for Clarinet, Cello, composed for the Amberg Ensemble.

This Sunday is a great day for lovers of classical chamber music in Buffalo. After attending the Friends of Vienna afternoon recital, they can get a bit to eat and then head out to the Camerata di Sant’Antonio concert at 7:30pm in the Montante Cultural Center at 2001 Main Street, on the Canisius College Campus. The musicians of the Camerata, under the baton of their music director Christopher Weber, will be joined by the members of the Canisius College Chorale, led by their director Frank Scinta, in the kind of eclectic program that has become the group’s hallmark. Last season, the Camerata changed its longstanding operating procedure, launching its TakeNote initiative, whereby admission to concerts is free, but with the good will donations of concert patrons being given to various not-for-profit charitable organizations. Sunday’s TakeNote event is being held to raise awareness of, and donations for, the Bison Children's Scholarship Fund.

When it comes to discovering obscure or unknown repertoire, the Camerata’s oboist Paul Schlossman has consistentl

y managed to unearth the kind of works that, once you have heard them, makes you seriously question how they were ever overlooked in the first place. Schlossman will be the soloist in what will be the area premiere of Brazilian composer Brenno Blauth’s Concertino para oboe e cordas, a work whose outer movements alternate between sections of Brazilian dance rhythms and lush neo-romantic melodies, while the central impassioned Andante features solos shared by the oboe and the first cello. Better known is the moving Variations on a Theme by Tchaikovsky, composed by Anton Arensky in 1894 as a memorial after the death of his teacher.

BPO violinist Shieh Jian Tsai will be the soloist in Chaconne, a work attributed to the baroque composer Tomaso Vitali, a demonic series of bravura variations that Jascha Heifetz chose to open his Carnegie Hall debut.

The Canisius Chorale is featured in two works: Vivaldi’s motet for double chorus, Beatus Vir RV597, and American composer Eric Whitacre’s Five Hebrew Love Songs, originally composed for the Israeli soprano Hila Plitmann.  Whitacre writes “These songs are profoundly personal for me, born entirely out of my new love for this soprano, poet, and now my beautiful wife, Hila Plitmann”. In an interesting connection, Plitmann won a Grammy Award in 2009 for best vocal performance for her role as soloist on the BPO’s double Grammy Award winning CD of John Corigliano’s Mr. Tambourine Man: Seven Poems of Bob Dylan.

Admission is free, and all parking lots on the campus are open for general parking for the event.