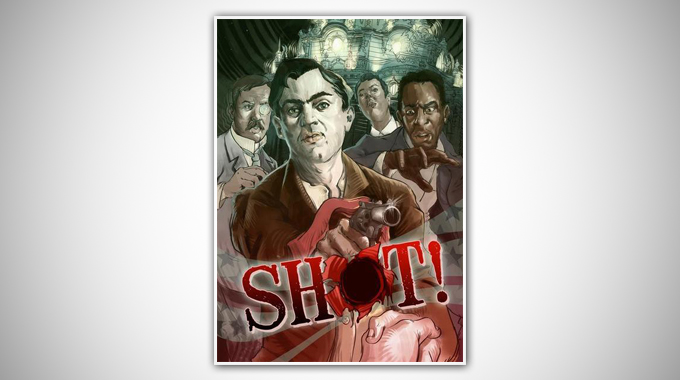 The world premiere of “Shot!” a new opera by composer Persis Vehar, will take place on Friday June 10 at 8pm, and Sunday June 12 at 2:30pm.

For the first time in its eight-year history, the Nickel City Opera Company (NCO) will present a production this season in Shea’s Buffalo Theatre.  The world premiere of “Shot!” a new opera by composer Persis Vehar, will take place on Friday June 10 at 8pm, and Sunday June 12 at 2:30pm. Metropolitan Opera bass Valerian Ruminski, founder and artistic director of NCO, Buffalonian born and bred, calls Shot! “The biggest story about Buffalo history in the history of Buffalo”.

When Ruminski launched Nickel City Opera, his new, locally-based opera company at the height of the country’s recession in 2009, there were undoubtedly many local opera-lovers who, while they wished him unlimited good luck in his new venture, wouldn’t have bet a plug nickel that the company would still be, not only around, but actually thriving, eight years later. Nickel City Opera has grown from strength, to strength in each of its opera productions at the Riviera Theatre in North Tonawanda over the past seven seasons. Ruminski and his company have upped the ante this season, however, when they present the world premiere of “Shot!” composed by the nationally known, much-awarded, and until very recently Buffalo-based composer, Persis Vehar at a much larger venue, Shea’s Buffalo Theatre in Downtown Buffalo.

One of the most significant events in the history of our city occurred on Friday afternoon, September 6, 1901, when President William McKinley was shot twice by an assassin in the Temple of Music on the grounds of the Pan American Exposition, which resulted in his death seven days later on September 14. The assassination was a genuine American tragedy, both for the nation and for the City of Buffalo, at the Pan American Exposition, an event marking the high point of our city. So, why and how do you go about creating an opera about such a historically defining event?

“Back in 2010 I was reading a few books about Buffalo and Buffalo history”, says Ruminski. “I was on a train ride to New York City one day reading and I was struck in particular about the tragedy of the assassination of President William McKinley at the Pan American Exposition in 1901. I thought to myself that if there was any moment in the history of Buffalo that deserved to be brought to the stage it was this moment that was not just local in nature but global in its ramifications”.

“After proposing the idea of an opera about the McKinley assassination to composer Persis Vehar I hired an artist to create a poster to embody the idea of our creation. Persis embraced the idea and her daughter Gabrielle was quick to begin studying and doing research to generate a quality libretto as she had for ‘Eleanor Roosevelt’ a previous opera by Persis that has enjoyed regional success”. Producing the premiere of a new opera that includes all new sets is a very expensive proposition, however, and while Ruminski had perhaps over-optimistically promised a production of “Shot” for the last several seasons it was only when his company was awarded a $25,000 grant last year by the locally based Cullen Foundation that the new opera could be green-lighted. Yet, the projected cost of the new sets was $45,000, significantly more than the grant money. The ever-resourceful Ruminski entered into an agreement with the Delaware North Corporation, whereby volunteers supporting Nickel City Opera would help the concessionaire at Bills games, and also at Sabres and Buffalo Bandits games, earning NCO another $25,000. Ruminski was himself a hands-on participant in this significant effort, which was a lot of hard work for every volunteer involved. It is very unlikely that there is anyone in a CEO position in any arts producing organization in Western New York who does as much, for so little monetary compensation as Ruminski.

“As far as the structure of the opera I turned to Verdi’s “La Traviata” as a matrix since it is one of the most successful and well loved operas in the genre. It opens with a party followed by a tragedy and ends with the main character dying in bed. I also envisioned a very dark, atmospheric prison scene with the assassin Leon Czolgosz dreaming of Emma Goldman who inadvertently inspired him to shoot the President. I also knew that we needed a host for the evening and I suggested that we create the Vaudevillian as a kind of Greek Chorus, to talk to the audience, introduce the scenes and break the ice. I feel this will be an effective structure for this story”.

“As we neared the end of the libretto process both Persis and Gabrielle were vehement that this was not only a story about a shooting but a story about the love between Ida and William which, as they related to me, had been mostly lost to history. The relationship between William McKinley and his wife rivals the intensity of the relationship between John and Abigail Adams as well as Harry Truman and Bess. It is as legitimate a reason to see the opera as the story of the assassination”.

“Over the past 5 years, after a few stops and starts, all the components needed to stage a premiere have come together. Our decision to take SHOT! to Shea’s Buffalo Theatre was done to present the opera to a larger audience and to present the opera in Erie County and in the City of Buffalo which is where the President was assassinated. SHOT! deserves a big stage and a big audience”.

“My hope is that everyone takes the time to come to Shea’s and experience a dramatization of one of the most seminal moments in the history of their home town. This moment has never been put on stage before and there will be many digital projections of historic Buffalo, with many references to Buffalo and Buffalonians can take pride in the fact that a major new piece of performance art about Buffalo is hitting the stage in 2016”.

The two act production, sung in English with super titles projected above the stage, features 18 principal singers, with a 32 person chorus, and a 26 piece orchestra, all directed by the very capable retuning NCO  veteran conductor Michael Ching. Valerian Ruminski will sing the role of President McKinley, and soprano Maria Teresa Magisano that of his wife, Ida, while tenor John Packard will sing the role of Leon Czolgosz and soprano Michele Capalbo that of Emma Goldman.

Sets will include the Milburn House, now demolished, where President McKinley was taken after the attack and scenes from the Pan American Exposition, as well as the jail cell of the assassin with a dream sequence featuring Emma Goldman. Popular songs from the period about Buffalo and the Exposition, sung by the character of The Vaudevillian, sung by Stephen MacDonald, will preface each of the opera’s four scenes.