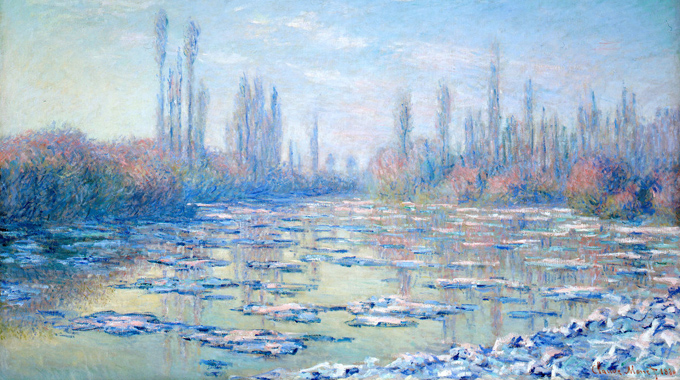 March 20th brings the closing of the Albright-Knox exhibit Monet and the Impressionist Revolution, 1860–1910. The exhibition, which has been delighting audiences, highlights the transformative work of the renowned French painter Claude Monet

March 20th brings the closing of the Albright-Knox exhibit Monet and the Impressionist Revolution, 1860–1910. The exhibition, which has been delighting audiences, highlights the transformative work of the renowned French painter Claude Monet. A key figure in art’s historical dialogue Monet broke away from the confines of traditional acedemic painting. As one of the founders of the Impressionist movement and arguably the movements most influential and prolific artist, Monet (1840-1926) consistently practiced its philosophy of expressing one’s perceptions before nature (the term “impressionism” in art is derived from the title of his painting Impression, Sunrise from 1874.) Laying the groundwork for the Abstract Expressionists that followed, Monet took painting to the edge of abstraction, but never diverged into completely nonrepresentational imagery. Monet painted outdoors en plein air (in the open air), perfecting his use of color to reveal the aura of natural light. He worked alongside other artists who were also breaking with tradition, such as Pierre-Auguste Renoir, Édouard Manet, Camille Pissarro, and Alfred Sisley. Using visible brushstrokes and developing open compositions, the Impressionists were the pioneers of “action painting” well before the mid-twentieth century era of Abstract Expressionism.

Monet’s work reflected the uncertainty and chaos of the natural world. He placed a greater emphasis on the interplay between light and color, experimenting with bold natural hues and a more casual and loose handling of paint. In this exhibition, the evolution of Monet’s genius is presented alongside a similar trajectory of works from the Albright-Knox’s Collection of modern art. Spanning five decades—from the height of Realism in Western art in the 1860s toward the landfall of abstract painting in the early part of the 1900s—Monet’s works are considered alongside those of other rebels and iconoclasts of the movement.

The inspiration behind Monet and the Impressionist Revolution came about during the last winter of 2015, when the Albright- Knox decided, as part of an unanticipated reciprocal loan agreement, to mount a small presentation dedicated to highlighting Monet within a larger body of related works from the museum’s Collection. While the Albright-Knox is host to a great number of late-nineteenth-century masterworks, it owns only one painting by Monet—Towpath at Argenteuil, Winter—a famous river scene painted on the banks of the Seine in Argenteuil, France, around 1875. Eventually, the loan of seven additional paintings by Monet and one by Manet (an artist who is not significantly represented in the museum’s Collection) from six American museums came to fruition, and serve as the exhibition’s basis. Art history buffs are likely to be familiar with some of the works, including On the Bank of the Seine, Bennecourt (1868), The Ice Floes (1880), On the Cliff of Pourville, Clear Weather (1882), and Stacks of Wheat (1890) to name a few. According to the results of open auctions,  original Monet paintings are valued at anywhere from $15 milion to $80 million.

To coincide with the exhibit, the Albright-Knox is publishing The Impressionist Revolution and the Advent of Abstract Art. Available in spring 2016, the book takes an in-depth look the transformative moments and formal innovations in Western art during the latter half of the nineteenth century, which layed the groundwork for the advent of abstract painting around the early 1900s. Highlighting fifty works of Impressionist, post-Impressionist, and early abstract art from the Albright-Knox’s world-renowned Collection, it will be the first publication dedicated to this particular segment of the museum’s holdings and is currently available for pre-order.

As mentioned, the show only runs until March 20th, and in light of the museum’s recent announcement of plans for expansion, both those who have a casual appreciation of art as well as dedicated aficionados will not want to miss the opportunity to see the exhibit in its final week. Even Bruce Springsteen, after his recent performance at the First Niagara Center, made it a point to visit the gallery and ponder the work of Monet and other Impressionists.  Admission is timed and ticket information for the exhibit as well as features and other event news can be found online at the museum’s official website albrightknox.org.