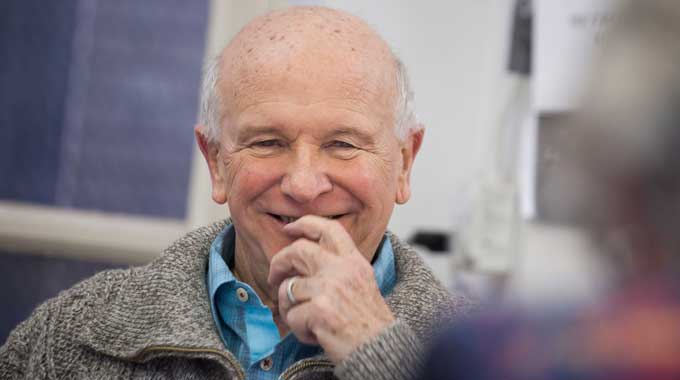 Terrence McNally, four-time Tony Award-winning playwright, will visit Buffalo on April 1 and 2, 2016 as a guest of Buffalo United Artists (BUA), the Dramatists Guild Fund, the Theodore Roosevelt Inaugural Historic Site, and Just Buffalo Literary Center.  During his stay, McNally, one the most highly regarded and widely celebrated playwrights in the world today will participate in two events to support theater in Western New York.

Terrence McNally, four-time Tony Award-winning playwright, will visit Buffalo on April 1 and 2, 2016 as a guest of Buffalo United Artists (BUA), the Dramatists Guild Fund, the Theodore Roosevelt Inaugural Historic Site, and Just Buffalo Literary Center.  During his stay, McNally, one the most highly regarded and widely celebrated playwrights in the world today will participate in two events to support theater in Western New York.

First, McNally will read from his new book, Selected Works, A Memoir in Plays (Grove Press 2015), at the Theodore Roosevelt Site on Friday, April 1, 2016, at 7 p.m.  The doors will open at 6 p.m., allowing patrons to tour the historic site; and McNally’s readings will be interspersed with performance of scenes and speeches from his plays read by Buffalo actors. This event will benefit BUA, which has a longstanding relationship with the playwright and his work.

Then, on the next day, Saturday, April 2nd, McNally and his husband, Broadway producer Tom Kirdahy (The Visit; It’s Only a Play; White Rabbit, Red Rabbit) will participate in a free master class supported by the Dramatists Guild Fund at Buffalo State College on at 11 a.m.

With a career spanning five decades, McNally is among the nation’s most eminent playwrights.  He is the author of such critically acclaimed plays as Love! Valour! Compassion!; Master Class; Lips Together Teeth Apart; The Lisbon Traviata; and Mothers and Sons, as well as the librettos for the musicals Ragtime,  Kiss of the Spider Woman, The Full Monty, A Man of No Importance, and The Visit. He has also written the librettos for two operas: Dead Man Walking and Great Scott.

Among his numerous accolades, McNally is the recipient of the Dramatists Guild Lifetime Achievement Award, and was inducted into the American Theater Hall of Fame in 1996.  He has received two Guggenheim Fellowships, a Rockefeller Grant, three Hull-Warriner Awards for Best Play, three Lucille Lortel Awards, and a citation from the American Academy of Arts and Letters. He was honored with an Emmy Award for his television play, Andre’s Mother.

“An Evening with Terrence McNally,” will feature McNally reading from his new book, Selected Works, A Memoir in Plays (Grove Press 2015), at the Theodore Roosevelt Inaugural National Historic Site. Interspersed with McNally’s readings, BUA actors will read scenes from the author’s plays.

The doors will open at 6 p.m., with docents on hand to answer questions about the historic site where Theodore Roosevelt became the nation’s 26th president.  The reading starts at 7 p.m., and will be followed by a reception and private book signing with wine and hors d’oeuvres in the F. Scott Fitzgerald Room of The Hotel Lenox. The $125 ticket price includes admission to the reading, the reception at the Lenox, and a signed copy of McNally’s book.  A $200 two-person package includes admission to the reading and reception, and a single copy of the book.  A limited number of $50 reading-only tickets are also available. Tickets are available online at http://www.trsite.org/ under the “EVENTS” tab.

A visit by Terrence McNally is arguably historic and has been made possible through the collaboration of many partners.

In its 24-year history, BUA has staged seven plays by McNally. The Lisbon Traviata in 1994; Love! Valour! Compassion! in 1996 and again in 2007; Andre’s Mother in 1996 and again in 2004; Corpus Christi in 2002; Some Men in 2007; The Ritz in 2009; and Mothers and Sons in 2015.  This summer, the company will present its eighth McNally play when they stage his most recent Broadway hit, It’s Only a Play with a cast featuring Jimmy Janowski, Lisa Ludwig, Mary Kate O’Connell, Michael Seitz, Anthony Alcocer, Adam Hayes, and this writer (Anthony Chase, as drama critic Ira Drew).  McNally’s work has also been seen on the stages of Shea’s Buffalo (The Full Monty; Kiss of the Spider Woman); Irish Classical Theatre Company (A Man of No Importance, Kavinoky Theatre (Lips Together Teeth Apart), Ujima Theater Company (Bad Habits), Free Fall Productions (Frankie and Johnny) and MusicalFare (Master Class).

“Terrence’s work has been an inspiration to our company,” said BUA founder and artistic director Javier Bustillos. “As a playwright who expresses so many truths about the lives of the LGBT community, his work has provided an ongoing theme for BUA. Over the years, I am proud to say that we have become friends. We have been talking with Terrence and Tom about coming to Buffalo for nine years, ever since we opened our former theater on Chippewa Street with a reading his play The Ritz.  I am thrilled that this is finally becoming a reality.”

Stanton Hudson, executive director of the Theodore Roosevelt National Historic Site is similarly enthusiastic about the McNally visit: “We are delighted to host an artist whose work has advanced a progressive social agenda in a way that is so very compatible with the legacy of Theodore Roosevelt. We anticipate that this will be a very special and memorable evening.”

For the free Saturday event, McNally and Kirdahy will participate in a “Question and Answer Master Class” in Donald Savage Theater and Communication Building at Buffalo State College, co-hosted by this writer (Anthony Chase) and playwright Donna Hoke, Western New York regional representative of the Dramatists Guild. The event, which requires no RSVP, is part of the Dramatists Guild Fund’s Traveling Masters program, a national outreach program that sends prominent dramatists into communities across the country for writing workshops, master classes, talkbacks, and other public events. In partnership with leading regional theaters and universities, Traveling Masters creates local programming that gives theater professionals and the public first-hand experience with renowned artists.

The Dramatists Guild Fund (DGF) is the public charity arm of the Dramatists Guild of America. Its mission is to aid and nurture writers for the theater; to fund non-profit theaters producing contemporary American works; and to heighten awareness, appreciation, and support of theater across the country.

“Our playwright community is thrilled that Terrence and Tom will be visiting as part of the DGF Traveling Masters Program,” said Hoke. “This is the first Traveling Master we’ve had since I became rep, and to have someone as celebrated as he is generous promises an inspiring event. I thank DGF, BUA, the TR Site, and Just Buffalo for the collaboration that enabled this to happen.”