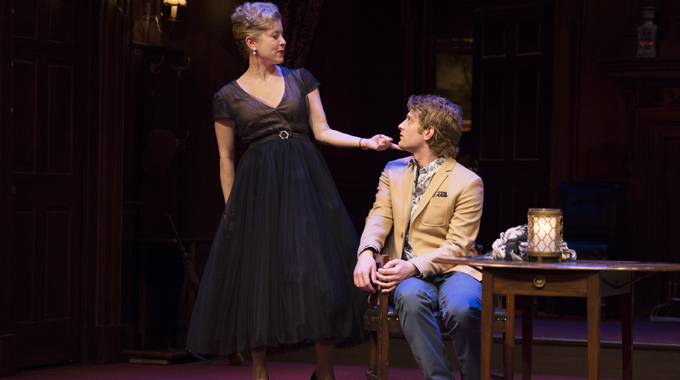 Mrs. Warren’s Profession is the most highly regarded of George Bernard Shaw’s “Plays Unpleasant.” The profession of the title is the world’s oldest, prostitution – a word never used in the play.

Word is out that the current Shaw Festival production of Mrs. Warren’s Profession will transfer to Buffalo’s 710 Main Theatre in November, after it ends its run at Niagara-on-the-Lake.  Therefore, if you live in the Queen City or its environs, any pre-Buffalo viewing of the show becomes a kind of audition for the season at 710 Main.

Happily, this is a very successful audition, indeed.

Mrs. Warren’s Profession is the most highly regarded of George Bernard Shaw’s “Plays Unpleasant.” The profession of the title is the world’s oldest, prostitution – a word never used in the play. To overcome her impoverished situation, Mrs. Warren and her sister Liz used their good looks and personal charm to great advantage.  Mrs. Warren has become spectacularly wealthy, and runs a chain of brothels across Europe. The complication is that she has raised her daughter, Vivie, to be entirely ignorant of the advantages she enjoys have been financed. As the play begins, Vivie, who has been raised at boarding schools, is about to receive a visit from her remote mother, and their lives are about to change.

Shaw has structured the play around two pivotal confrontations. In the first, Vivie demands to know who her father is and how her mother has earned her living.  The surprise of this interaction is that Vivie reacts with total understanding and embraces her mother as never before. The second confrontation, however, is the moment that marks the play as a Shavian masterwork.  Vivie is able to accept that her mother would stoop to prostitution, given her dire circumstances.  She cannot, however, accept that her mother would continue in the sex industry now that her circumstances have changed.

Shaw ingeniously maneuvers his play from the realm of melodrama into the realm of Modern Realism, making himself the equal of Ibsen and Chekhov in the process.

The challenge of staging Mrs. Warren is that the initial melodramatic confrontation is deliciously explosive and implicitly dramatic.  It’s foolproof.  The second collision, however, involves deft philosophical sparring.

Director Eda Holmes’ handling of the production is elegant, marvelously entertaining, and a model of clarity.  She is aided by the some of the finest actors in the Shaw Festival acting ensemble.  The men are wonderful.  Wade Bogert-O’Brien is one of the festival’s finest leading men, and is here allowed to depart from the litany of long-suffering lovers he has played in order to create the rakish Frank Garner, a man who sees Vivie as an easy path to his own future. Thom Marriott’s Sir George Crofts manages to contain the privilege and disrepute of his class simply by standing in place; his proposal to Vivie is simultaneously creepy and endearing. Gray Powell is affecting and appealing as Mrs. Warren’s artistic friend, Praed. Shawn Wright is a playful amalgam of pretense, aspiration, fear, and regret.

I am glad to report that all of these exceptional actors, except for Mr. Wright who has another commitment, are expected to make the transfer to Buffalo.  The play, however, is not primarily about the men. This is the story of two women and the actresses who will be paying Buffalo a call are, in a word, sensational.

The confrontations between Nicole Underhay as Mrs. Warren and Jennifer Dzialoszynski as Vivie are sublime. I was particularly impressed by the second of these encounters, in which the women arrive at an impossible impasse.  Vivie withdraws from her mother and Mrs. Warren comes out with her claws exposed.

Dzialoszynski (who is sure to enjoy performing the role in a city where her Polish name poses no pronunciation problems) plays Vivie as the embodiment of ethics, logic, and reason.  By contrast, Nicole Underhay’s Mrs. Warren is undone by her emotion.  As she begins to realize that she is losing her hold on her child, her already working-class accent reverts to pure cockney. This is especially notable when she pleads, “I want my daught-ah! I’ve a right to ya!” To be honest, I had never noted how constantly Shaw stresses Mrs. Warren’s emotional fragility. I remember the character as hard-boiled practicality, and yet, she is remarkably prone to crying and to decisions fueled by sentiment. Marvelous Ms. Underhay mines the script for all its worth in this regard.  Underhay ups the wattage of the more intellectual confrontation by powering up its emotional intensity. It’s thrilling to see.

I had also never noticed before how often the characters in this play express what they “have a right to.”

Again, director Eda Holmes demonstrates her total comprehension of the play and her skill at communicating its message.  As was common for many plays of the Modern Realist period, Mrs. Warren’s Profession was forbidden a license for public performance.  Instead, it was given its first performance at a private men’s club in 1902.  The irony of this – performing a play about the rights of women in a club reserved for men – is not lost on Holmes.  The conceit of her production is that we are back at the New Lyric Club in London for an anniversary recreation of the first reading of the play, but in modern dress.  In this way, Holmes invites us to examine the hypocrisy that still exists in the relationship between the sexes.

To be sure, the division between men and women is the oldest in the theater. Holmes emphasizes the conflict at every level of her production, first by setting the play in a men’s club, but also by casting diminutive Ms. Dzialoszynski as Vivie Warren.  The men tower above this powerhouse of a woman, but she seems not to notice.  Her future is clear, if not to anyone else, at least to her.  The final image of the production, Vivie working with total focus and conviction, alone at her desk, as a wall of male characters stand looking down upon her is indelibly imprinted on my theatrical memory.

It is fortuitous that this excellent production of one of Shaw’s most engaging plays will be the first Shaw Festival production to be performed at 710 Main Theatre.  Let us hope it is the first of
many.