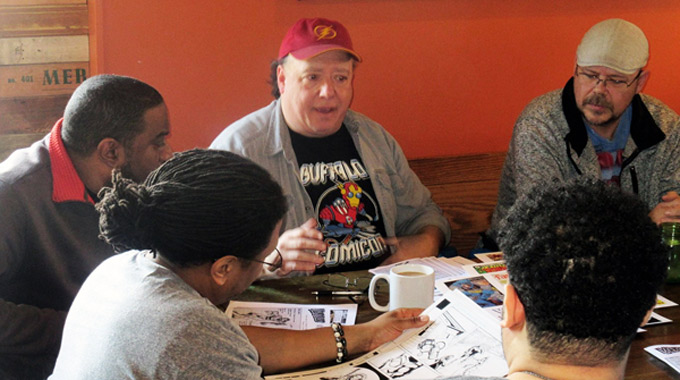 The Buffalo Comic-Con Special One-Day Spring Garage Sale Show is set to take place this Sunday, April 3rd at the Marriot Niagara on Millersport Highway. For convention promoter Emil Novak, comic books are more than a hobby; they’re a way of life. As the longtime proprietor of Queen City Bookstore, Buffalo’s oldest-running bookstore, Novak can confidently lay claim to being the greatest force of good for comic book lovers in our cities illustrious history.

The Buffalo Comic-Con Special One-Day Spring Garage Sale Show is set to take place this Sunday, April 3rd at the Marriot Niagara on Millersport Highway. For convention promoter Emil Novak, comic books are more than a hobby; they’re a way of life. As the longtime proprietor of Queen City Bookstore, Buffalo’s oldest-running bookstore, Novak can confidently lay claim to being the greatest force of good for comic book lovers in our cities illustrious history. The Buffalo Comic-Con, sponsored through Queen City Bookstore, has consistently served to showcases the best the medium has to offer for local fans and artists alike.

“It has been growing really nicely these past two or three years, “ said Novak, “and now we’re making an extra special effort into making it come together. There’s so much talent in our town, it sounds cliché to keep saying it, but there’s so much talent who love to draw, write, and illustrate.”,

Comic Conventions first originated in the 1960s, coinciding with the medium’s boom period at that time. Comic conventions are a celebration of all things comic book, superhero, science fiction, and horror, these small gatherings would, in time, transform into the pop culture extravaganzas we know them as today, attracting superstar artists  and writers, as well as Hollywood celebrities from  Marvel films, Hunger Games, Harry Potter, etc.

While the 16th annual Buffalo Comic-Con, set to take place later this fall, might draw quite that level of Hollywood star power, for both fans and artists the special charm of a Comic-Con remain the same regardless of venue size. Buffalo Comic-Con is a celebration of the many colorful, fun-filled, fantastic universes which have captured the imagination of comic lovers for so long. For many fans this is achieved through Cosplay; the practice of dressing up in costume as one’s favorite fictional character, whether famous from comics, movies, or video games. As with previous events, this Sunday’s show will feature a costume contest with cash prizes and gift certificates being awarded to winning cosplayers. Despite this, ask any true cosplayer and they’ll tell you that the greatest reward of all is the opportunity to delight fans, especially younger ones, by bringing their favorites heroes to life.

Along with promoting Buffalo Comic-Con, Novak also has spent many years nurturing the Visions Comic Art Group, a growing collective of Buffalo-based comic book artists working to perfect their craft through collaboration.

“Just like any young artist or fan, you find other friends who are interested in comics; we started Visions as a means of drawing and producing our own artwork and comics, both for fun but also with the hope or possibility of someday becoming professionals”, explains Novak. “Visions has always been supported through Queen City Bookstore, and it’s been around for a long time now. Some of these guys have been drawing since the 80s and 90s, we’ve got a really good flux of ages and talents, and we’re always looking for new members, whether they want to draw, write, ink, or color.”

Hosting meetings regularly at the Daily Planet Coffee Shop on Hertel, Novak is excited for the artwork of the Visions Comic Art Group to gain wider exposure in the future.

“We’ve got a big art show coming up at the Market Main Street Gallery, running from May 16th through 21st. It’s a great space that can host a lot of people, we’ll have a couple hundred pages of original art on dispay, and the artists will be present to sign autographs and sell goods. It will feature two large window installations with sample work from all the artists involved, it’s the perfect venue to entertain guests and highlight the artwork. We also previously published Visions Anthology Part I, a nice 100-page book, and we have another anthology book we’re getting ready to do.”

For Novak, the work he’s done through Visions Comic Art Group grew directly out of his own passion for the arts. As a young man, Novak had ambitions of pursuing a full time career as a comic book artist, earning the opportunity to be an apprentice with Marvel in New York City. Family responsibilities eventually led him to assuming the duties of taking over the bookstore his father founded while also raising a family.

“I’ve always loved art; drawing, writing, and illustrating, I just like helping young people learn and helping them with their art.  Most become interested just for fun, and that’s how it should be, but every now and then you find a talent who begins to show real potential. A lot of the guys who are in the group now started young, and I can see them now in their 30s producing professional quality work, it’s been really cool.”

Along with his work as a comic book artist, Novak has also been heavily involved with filmmaking, another artistic passion closely linked to his love of comics. Novak’s last independent feature, the classic horror-throwback Frankenstein’s Patchwork Monster, was profiled in Artvoice last May. He is currently planning to shoot an H.P. Lovecraft-influenced supernatural mystery-thriller with the help of fellow Visions artists. “It’ll be a really unique take on the Chtulu mythos”, says Novak.

The Buffalo Comic-Con is not just a special event for fans; it also offers comic book artists the unique opportunity to interact with consumers directly.  One of the many talents who will be at the Buffalo Comic-Con Show this Sunday is local artist Will Rodriguez, whose artwork adorns the cover of this issue. A Visions Comic Art Group member since the early nineties, Rodriguez is excited to promote his first creator-owned comic book Supernatural Event, published by Creative Zenith, as well as other work done through Visions.

Despite being thought of as something of a niche product, the mainstream appeal of comic books cannot be overstated. As of this writing, Warner Bros. Batman V Superman: Dawn of Justice is currently the #1 movie at the North American box office, while Deadpool, based on the Marvel comic anti-hero, is set to become the highest grossing R-rated movie of all time. For Novak and others like him, however, the special appeal of comic books is something that cannot be duplicated by other mediums, and the Buffalo Comic-Con remains the crown jewel in the Queen City’s comic book community.

Following this Sundays show, Queen City Bookstore will begin announcing guest speakers, artists, and events that will be featured at the upcoming Buffalo Comic-Con taking place the weekend of September 17th and 18th. In the meantime, Novak is always happy to see that Queen City Bookstore and the fan base which the shop has cultivated continues to remain an integral part of Buffalo’s cultural scene, as a new generation of readers are drawn to the world of comic books. To learn more about Buffalo Comic-Con, purchase tickets for this Sundays event, register for the cosplay contest, and for more information about Visions Comic Art Group, check out Queen City Bookstore on Facebook.