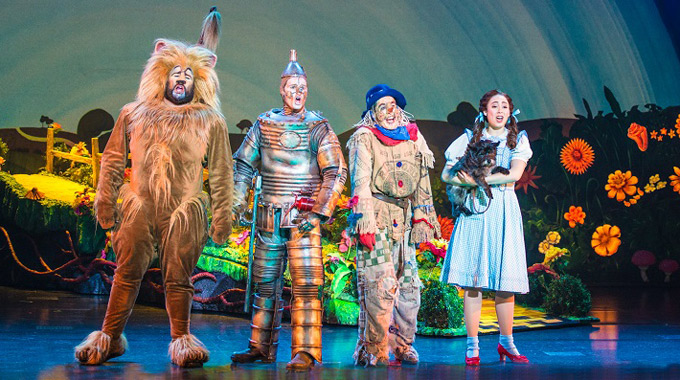 The Wizard of Oz is universally hailed as one of the greatest movie musicals of all time.  Its remarkable score, by Buffalonian Harold Arlen with lyrics by E.Y. Harburg is one of the most adored and enduring in movie history. So why or why would the creators of the new stage version opening at Shea’s on Tuesday for a one-week engagement feel the need to augment that remarkable score with additional songs by Tim Rice and Andrew Lloyd Webber?

If you’re like me, you’ve been wondering about that.

To answer that question I was directed to David Andrews Rogers who serves as the show’s associate music supervisor, musical director, and conductor.  And believe it or not, his elegantly simple answer makes perfect sense.

“Because a stage musical is different from a 102 minute film,” says Rogers.

“In the musical theater,” he explains, “every key character typically has an establishing song, and yet, in the film neither Glinda nor the Wicked Witch has a song. Professor Marvel doesn’t have a song. The Wizard doesn’t have a song. This is where Tim Rice and Andrew Lloyd Webber have stepped in, to help what is really a film musical fulfill the needs of the stage.”

In addition, Tim Rice and Andrew Lloyd Webber have provided Dorothy with what Lehman Engel might call a more traditional “I Want” number to establish the motivation for the whole story. In the musical theater, an “I Want” song allows a main character to sing about why they are discontented with their current life and about what they “want.”  Eliza Doolittle sings “Wouldn’t it Be Loverly.”  Annie sings “Maybe.”  In Guys and Dolls, Sarah Brown sings “I’ll Know” and Miss Adelaide sings “Adelaide’s Lament.”  In Avenue Q, Princeton sings “What Do You Do with a B.A. in English?”

For this production of The Wizard of Oz, Rogers reveals that Dorothy gets an “I want” song called, “Nobody Understands Me,” in which she expresses the dissatisfaction of “being a teenage girl on a Kansas farm where there’s work to be done and nobody has time to listen to her concerns.”

For the additional songs, the show could scarcely have done better than Britain’s Tim Rice and Andrew Lloyd Webber, the team that famously created Jesus Christ Superstar and Evita.  This adaptation previously played in London.

Rogers also explains how the basic structure of a film musical can be different from a stage musical, intended to be viewed live.

“Think about a song like ‘Over the Rainbow,’” he says. “It’s near the beginning of the film, but in the theater, that’s what’s called an 11 o’clock number – a song that thrills the audience and energizes them near the conclusion.  It belongs near the end of the show.  We actually know that in an effort to keep the film as close as possible to 90 minutes, a reprise of ‘Over the Rainbow’ was cut from the film. Dorothy sang it when she was trapped in the witch’s castle.”

Rogers notes that Harold Arlen’s original songs cover a range of styles.  For this stage adaptation, Tim Rice and Andrew Lloyd Webber have gone back to the period, for example, giving the witch a Kurt Weill / Bertolt Brecht type number called “Red Shoes Blues.” The Wizard sings “Bring Me the Broomstick of the Witch of the West.” Glinda gets a slightly off-period pop style tune called “Home is a Place in Your Heart.”

And what about the overture that has thrilled generations of children with anticipation?

“They have wisely retained the original overture,” Rogers assures me, adding, “and they have cleverly inserted four bars of ‘Nobody Understands Me.’”