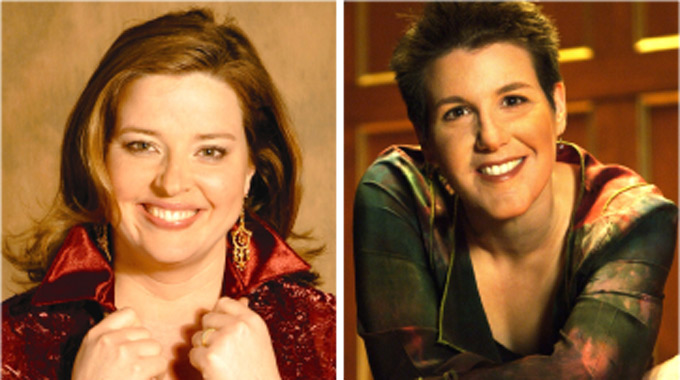 Just how many years ago did the vibrant, and long-standing traditions of the art song recital begin to slip towards its current, almost invisible status on the local classical music scene? It seems that it was only yesterday that the UB department of music would co-sponsor a yearly recital, along with the Marilyn Horne Foundation, of German lieder, French melodie and English language art song, featuring an up-and-coming young vocalist. And, very often, the now defunct QRS series and its now equally defunct successor, the Ramsi P. Tick concert series, made a yearly vocal recital a must.

Just how many years ago did the vibrant, and long-standing traditions of the art song recital begin to slip towards its current, almost invisible status on the local classical music scene? It seems that it was only yesterday that the UB department of music would co-sponsor a yearly recital, along with the Marilyn Horne Foundation, of German lieder, French melodie and English language art song, featuring an up-and-coming young vocalist. And, very often, the now defunct QRS series and its now equally defunct successor, the Ramsi P. Tick concert series, made a yearly vocal recital a must.

Luckily, the Friends of Vienna concert series remains committed to sponsoring at least one concert per season celebrating the incredibly rich heritage of classical song. This year’s FOV event on Sunday April 10 at 3:30pm in the Unity Church at 1243 Delaware in Buffalo will feature the critically acclaimed, multi-award winning Canadian contralto Lynne McMurtry and Eastman School of Music pianist Alison d’Amato in a program of rarities by Brahms, Mahler, Poulenc, Virgil Thomson and the overlooked Russian Romantic composer, Alexander Gretchaninov.

So how did they decide on this particular program? “It grew in equal measure from composers that I love and projects Alison and I have done together in the last few years”, says Lynne. “I love to sing Brahms and Mahler when I can, because they wrote so well for my kind of voice. I don’t get a lot of chance to sing recitals, so it’s a pleasure to perform them when I do. I’m particularly excited about the Gretchaninov set, because they are so rarely heard, and I think they’re wonderful songs. Of course, the Thomson project is a recent thing that we’re both proud of, so we wanted to share that on this program as well”.  Alison added “It’s true that these songs are among our favorite pieces. The Brahms songs in particular are core Romantic repertoire. I get to coach my students as they meet them for the first time, and it makes me miss playing them myself! This music has endured for generations, and it’s wonderful to be able to share it in such a warm and intimate context.”

Recently, both Lynne and Alison have been involved, through their Florestan Recital Project, in a just completed, first time-ever recording of all the songs of the now sometimes overlooked American composer Virgil Thomson, who had previously loomed large on the American music scene in the first half of the 20th century, both as a composer, and as a highly influential music critic for the New York Herald-Tribune. “The variety of Thomson’s poets and compositional approaches is amazing to dig into as a whole”, says Alison. “A colleague of ours once said that you learn much more about a composer through a song that you do about the poet whose words are set; that was a guiding principle of understanding Thomson’s works and the breadth of his influences. It also reminds me to consider the composers we programmed as living, feeling human beings, not just icons of classical music. It makes playing their music much more vital”. Lynne adds that “working on the Virgil Thomson project only reinforces my already-held belief that song is such a diverse universe, with so many perspectives…even a single composer can have so many types of songs in his oeuvre”.

While Lynne McMurtry has developed a significant career as an opera singer, she has always kept a part of her heart in the recital hall:  “I think there is a greater intimacy on many levels in singing art songs. Perhaps the most significant one for me is that, instead of being assigned an operatic character just because the voice type fits, I can explore themes and poems and texts that interest me as an individual. Also, we are performing closer to the audience, so there is a physical intimacy. Sonically, there is a larger scope of color possible as well; the soundscape can be more varied in a recital”.

So what does the near future hold?  “I am singing in Beethoven’s 9th Symphony in Calgary, Alberta later this month”, says Lynne. “In June, I’m returning to the Art Song Lab in Vancouver, which premieres new art songs in collaboration with the composers and poets who create them, and I’ve been involved with that program since its inception in 2011. I’m excited to do one of my favorite opera roles this fall, as Mistress Quickly in Verdi’s Falstaff with Manitoba Opera in Winnipeg”.

Alison d’Amato says “I am also involved in Vancouver’s Art Song Lab as a co-director, and it is one of the highlights of my year to work with Lynne and all the composers and poets that attend. In August, I will be returning to the SOURCE Song Festival in Minneapolis to perform and teach, and it’s a wonderful example of how song can engage and serve a community – I would love to explore something similar in Buffalo! In the meantime, I am enjoying my full-time position at UB’s Musical Theatre program, and we are preparing for this spring’s production of Stephen Sondheim’s Into the Woods with a great cast of students”.

“One of the reasons that recitals are so enjoyable is that I have so much fun working with my wife”, says Lynne, “who I met at Tanglewood Music Center in 2001. We share a deep love for song and poetry, and we have grown to value each other as artists and collaborators. I love that aspect of our partnership”. And, adds Alison, “the great thing about song is that there can be something for everyone. Love, death, Gertrude Stein’s whimsy, and French party pieces are just the beginning”!