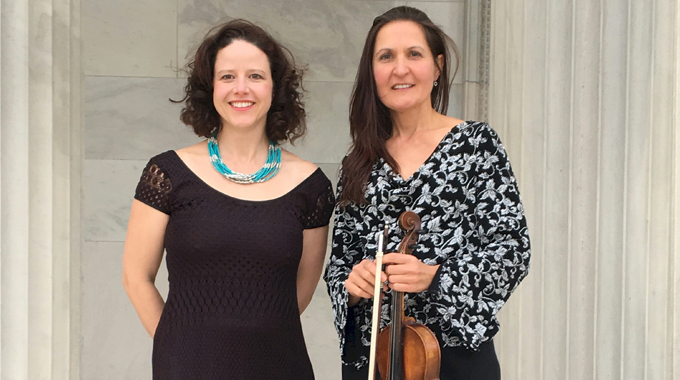 On Friday May 27 at 7pm the Camerata di Sant’Antonio will present an all-Slavic concert featuring works by Polish, Czech and Bulgarian composers at Corpus Christi Roman Catholic Church at 199 Clark Street, which is located one block east of the Broadway Market, with ample off street parking.

On Friday May 27 at 7pm the Camerata di Sant’Antonio will present an all-Slavic concert featuring works by Polish, Czech and Bulgarian composers at Corpus Christi Roman Catholic Church at 199 Clark Street, which is located one block east of the Broadway Market, with ample off street parking. A tour of the church at 6:15pm will be followed by a pre-concert presentation by the Chopin Singing Society. “The timing of this concert is fortuitous”, says Christopher Weber, artistic director of the Camerata, “since Corpus Christi recently received exploratory monies from New York State to develop a revitalization plan for the Broadway Fillmore district that they are now calling the East Village”.

The event is being presented with support from the Western New York chapter of the Kosciuszko Foundation, which has in the past provided major financial support for new, fully-staged productions of two classic Polish operas, Szymanowski’s “King Roger” and Moniuszko’s “Straszny Dwor” (Haunted Manor), at Shea’s Buffalo.

You can always count on the Camerata di Sant’Antonio and its founding Artistic Director, conductor Christopher Weber, to program at least one unique piece: either the premiere of a new work, or the rediscovery of an overlooked gem. This concert is no exception as it will feature the premiere of Petar Petrof’s Bulgarian Suite, “A Day in a Life”, written for, and dedicated to Camerata violinist Nadejda Nigrin who will be the featured soloist. Nigrin, also a member of the BPO, is a native of Bulgaria, as is composer Petar Petrof, a composer, pedagogue, pianist and conductor who is chairman of the music theory department at the National School of Music and Performing Arts in Stara Zagora, Bulgaria. Although little known in the United States, Petrof is a prize-winner of many national and international competitions and his compositions have been performed in the Czech Republic, France, Germany, Italy, Lithuania, the Netherlands, Russia and Ecuador. “Being able to premiere Petrof’s work is a much too rare opportunity to engage this Eastern European musical style”, says Weber. “Likewise, it’s also a rare opportunity for our audience to hear something from the classical music world in Bulgaria”.

Of his Bulgarian Suite, “A Day in a Life”, Petrof says that it can be looked at “As either the span of one day, or of a whole life. The first movement ‘Morning Song’ evokes nature, mountains, and something new: either the beginning of a day, or the beginning of a life. In the second movement, ‘Balkan Dance’, the day starts and the main character, rather than going to work procrastinates; he dances, having fun, just as in the early part of life things are easy and joyous. In the third movement ‘Small Toccata after Dinner’ the main character continues to party with some drinks here, some drinks there, to help him forget, getting drunk with the inevitable arguments and scandals, mirroring the middle part of life, with its ups and downs, and the struggles and successes that occur while trying to survive. The final movement, ‘Evensong’ is a prayer, simple and at the same time very deep. There is maybe desperation but at the same time a hope that there is a tomorrow, or perhaps, a reflection at the end of life: is there something bigger than us, something more than just surviving?”

Czech composer Josef Suk (1874-1935), who studied under Dvorak, later married his daughter, and Weber is a great admirer of  his “Serenade for Strings”, an early work composed in 1892. “Why do I love Suk’s “Serenade”, asks Weber? “ I find the “Serenade” unabashedly romantic, harmonically unpredictable, yet structurally balanced and always logical to the ear. It has one of the most gorgeous adagios in the string repertoire, even though it is a student work written by an 18-year-old. Suk disperses his lush melodies across all the parts, giving everyone a chance to bathe in the beautiful long lines and to shine. It’s a challenging yet fun piece to conduct, as there is a lot to do, but it’s flexible in its interpretation, giving us an opportunity to make it our own. Nonetheless, despite its constant lyricism, structurally sound writing, and universal appeal, it’s a tough piece to pull off”.

Along with Witold Lutos?awski and Krzysztof Penderecki, Henryk Górecki (1933-2010) was one of the leading composers of the Polish avant-garde renaissance during the post-Stalin cultural thaw. Górecki was little known internationally until the 1992 release of a CD of his “Symphony No. 3, Op.36, Symphony of Sorrowful Songs”, featuring American soprano Dawn Upshaw and the London Sinfonietta under the direction of the American conductor David Zinman.

Although critically acclaimed in Poland at its 1977 premiere, the Symphony of Sorrowful Songs had languished until it was recorded fifteen years later by Zinman, when it went on to quickly become an unexpected, international classical best seller. A different Polish text is sung by the soprano in each of the symphony’s three movements. The text of the haunting second movement, which will be performed on this program, is a prayer to the Virgin Mary which was inscribed by Blazusiakówna, a Polish prisoner of the Gestapo, on her prison cell wall in Zakopane during World War II. The very versatile soprano Colleen Marcello, who is comfortably at home in musical styles ranging from the Renaissance to the contemporary, will be the soloist.

A free will donation of $10 is suggested. Information: corpuschristibuffalo.org.