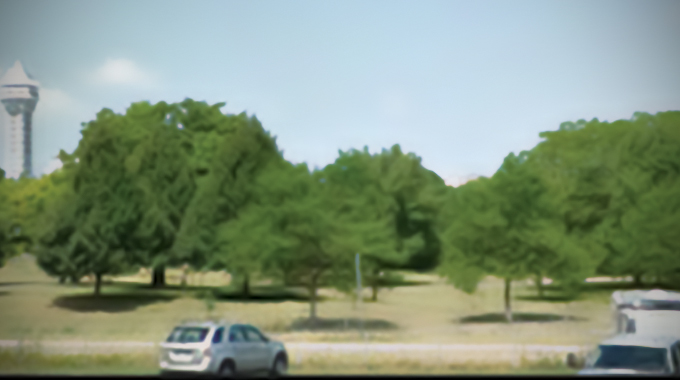 The past couple of years the state agency has been working overtime to clear-cut trees in some of its most popular Western New York parks, such as Niagara Falls, Allegany and Letchworth State Parks, in order to expand parking lots, bathrooms, roadways and in one case, ironically, construct a “nature center”, all pursuant to Gov. Andrew Cuomo’s $900 million “NY Parks 2020” plan.

“I think that I shall never see, A poem lovely as a tree,” penned Joyce Kilmer a century ago.

Somebody should tell New York State Parks that.

The past couple of years the state agency has been working overtime to clear-cut trees in some of its most popular Western New York parks, such as Niagara Falls, Allegany and Letchworth State Parks, in order to expand parking lots, bathrooms, roadways and in one case, ironically, construct a “nature center”, all pursuant to Gov. Andrew Cuomo’s $900 million “NY Parks 2020” plan.

“This is the state’s #1 park!” enthused Parks Commissioner Rose Harvey at the groundbreaking for a new $6.7 million Nature Center at Letchworth State Park one year ago. “In fact, it’s the #1 park in the entire country!”

Rather than get further carried away and pronounce Letchworth the greatest state park in the entire universe, Harvey gave it a rest and moved on to single out for praise and gratitude Parsons Brinckerhoff, the worldwide engineering and development firm that managed construction of the new Nature Center. Parsons Brinckerhoff contributed $15,000 in four separate payments to Gov. Cuomo’s re-election campaign over a period spanning 2013 and 2014.

A local citizen’s group, Campaign for the Letchworth Nature Center, was suckered into raising nearly $1.5 million in private donations towards the construction of a building on state parkland which will be, in perpetuity, the exclusive property of state government.

Plunked down in the middle of formerly pristine woods, surrounded by parking lots and access roads, a large grove of old growth trees had to be exterminated to provide “permanent and changing exhibits, space for school groups, a kiosk for sales of gifts and souvenirs such as field guides, books, postcards and assorted wildlife and nature knickknacks, and educational technology including WiFi access.”

The carnage continued recently in the sprawling Allegany State Park south of here on the Pennsylvania border. A large grove of mature redwoods on the well-traveled approach to the administration building was felled, ostensibly for maintenance of the Red House Lake dam.

“It looks horrible without the tall pines,” complained Deborah Howell on Facebook, “Always my favorite ride into the park.”

“One of the things I loved about the road leading up to the administration building was… the towering, wooded scenery and shimmering lake” added Art Bates. “I know widening the road is partial reason for this travesty, just don’t want to see a sterile, NYS-style thruway carved into what was once a picturesque roadway. After all, Allegany State Park is supposed to be about birds and trees and stuff, right?”

With an average depth of 7 feet, and only a thousand feet or so across at its widest, and nobody living anywhere around it, the likelihood of some kind of catastrophic dam collapse at Red House Lake is decidedly remote. An October, 2015 State Parks press release, perhaps, reveals the real reason for denuding the area of the majestic conifers: “the ($1.5 million) project will include rehabilitation of the spillway, bridge, and lower retention pool… including a widened roadway over the dam to create a separate pedestrian and bicycle lane…”

Then there’s the outright shock, horror and disgust exhibited by local citizens as Andrew Cuomo’s nightmarish $50 million Niagara Falls State Park “Landscape Improvements” plan has been rolled out over the past couple of years. The expansion of parking lots, installation of toll booths and barriers, construction of new Delaware North fast food facilities, demolition of Wallenda and Tesla monuments, laying of thousands of overpriced, substandard pavers over formerly natural areas such as Three Sisters Islands – all necessitating the removal of trees, some dating back to the birth of the Niagara Reservation in the 1880’s, in direct defiance of the Frederick Law Olmsted master plan for the park.

Finally, a blight of 52 mature hardwoods was prevented from continuing to infect the top of the Niagara Gorge when State Parks cleared land in preparation for construction of a new Parks Police barracks, a project that was halted after we reported on it two years ago, but not soon enough to save the unaccounted-for trees from some government bureaucrat’s wood stove.

Around and About: Schroeder Fund Raiser Signals Mayoral Run
The Best Drug Store In Town