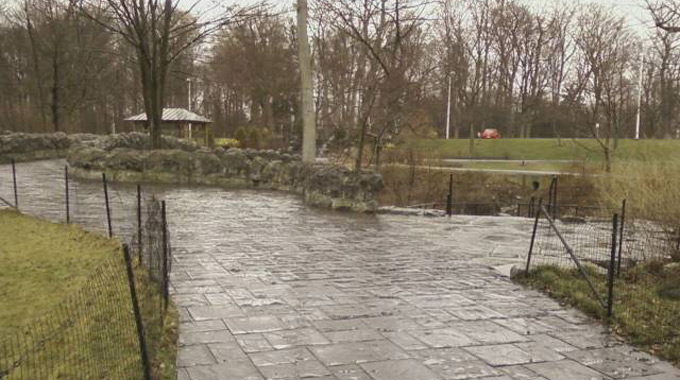 It turned out that LA Group tweaked the specifications for thousands of square feet of granite pavers to be used in park construction so that only one quarry in all of New York State, Champlain Stone, was in a position to meet those specs. For example, the “70 percent Hudson River blue… with red and black garnet inclusions,” described a product available only through Champlain Stone. Contractors were required to factor in prices based on the purchase of the granite from Champlain Stone, at a cost of around $60 per square foot, far above the market rate of $20-$40 for similar quality granite.

Several local companies that supply granite pavers were subsequently passed over in favor of Champlain Stone, which is located a short drive away from Saratoga Springs, in Warrensburg, NY.

The Reporter also drew the curtain back on a revolving door that appears to exist between State Parks, LA Group and Champlain Stone among their various project managers, architects and quarry executives, including a husband and wife team who straddle the pliant ethical boundary between government and special interest that is so typical of the New York State scene, where corruption and crony capitalism reign.

That would be a certain Stephen McCorkell of Saratoga Springs, NY, Albany-based project manager for the Niagara Falls State Park Landscape Improvements plan, and his wife, Lisa L. Tonneson-McCorkell, a Registered Landscape Architect at LA Group. Why this situation has not been looked into by State Attorney General Eric Schneiderman, or by Governor Andrew Cuomo, who disbanded the Moreland Commission he created to begin with to clean up state government, probably contributes in no small way to New York State’s perennially abysmal ranking among the states for business climate.

It’s important to note that it was Niagara Falls Mayor Paul A. Dyster who, as Niagara Greenway Commission Vice-Chair, presided over the meeting, opened discussion and called the roll for the vote that culminated in the Commission’s approval of the Niagara Falls State Park Landscape Improvements plan. In retrospect, it’s clear that the mayor failed to insist that citizens of his own city get an opportunity to provide input to the plan. He also neglected to request that State Parks conduct economic impact studies to determine if expanding parking and vending in the park would negatively impact businesses in the city.

In addition, many millions of dollars are being funneled to LA Group and Champlain Stone of Saratoga Springs (over $3 million), Scott Lawn Yard of Lewiston (performed Three Sisters Islands, Cave of the Winds and other park “improvements” for over $10 million), T Y Lin International Group of Rochester, NY (site engineering, MEP (mechanical, electrical and plumbing) and structural engineering, for over $6 million), John W. Danforth Company of Tonawanda (over $2 million for renovations to the Niagara Falls State Park Visitor Center and administration building) and Ledge Creek Development of Clarence Center (over $1 million for bathrooms and parking lot toll booths on Goat Island) .

The only company based in the city of Niagara Falls to garner a significant piece of the action in the Niagara Falls State Park was Yarussi Construction, Inc., at around $12 million. So when it comes to the $50 million being spent in the park, it doesn’t seem that Dyster tried very hard to make sure most of it stayed here.

Of the 35 separate campaign contributions totaling $7528 that Yarussi has lavished on local politicians over the last decade, $200 went to Friends of Paul Dyster.

The acres upon acres of pavers newly installed in the State Park are slippery when wet or covered with ice. This has resulted in numerous cases of tourists slipping on the slick granite, and necessitated the closing of Three Sisters Islands from November to late March as a result of the ironically-named Landscape Improvements plan.

And that’s not all. We have observed that approximately 1 in 20 of the expensive, imported pavers in the Niagara Falls State Park are exhibiting visible cracks!

Most of the the pavers have only been in place for a year or two. What they will look like 10, 20 or even 50 years from now?

In addition, specs called for a thickness of 3”. Is it normal for 3” thick stone pavers to readily crack within a year of being installed?