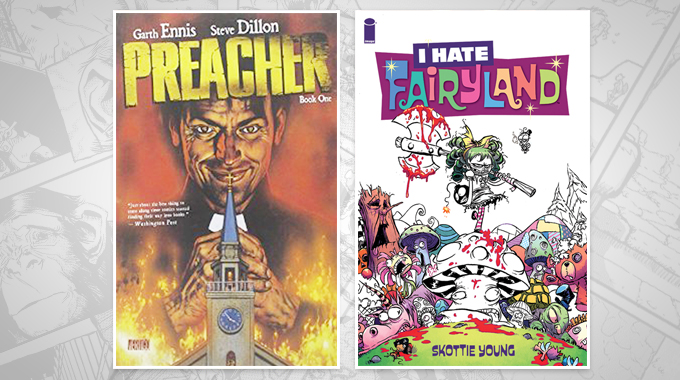 For some, the 1990s were an abysmal time for comics. For others, those willing to dig and get their hands dirty, it was a time of some of the best genre comics of all time, and at the top of that list stands Preacher. 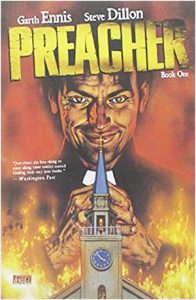 For some, the 1990s were an abysmal time for comics. For others, those willing to dig and get their hands dirty, it was a time of some of the best genre comics of all time, and at the top of that list stands Preacher.  The epic story of a Texas preacher named Jesse Custer; his one true love, Tulip O’Hare; and his best mate, Cassidy, is one of the most compelling, fascinating, exciting, and hilarious comics ever made.  Preacher begins with Jesse being inhabited by a being so powerful that the Lord has abandoned heaven, and now it’s time to hold him accountable.  Along the way, there are vampires, guns, angels, demons, liquor, sex, murder, inbreeding, horrific violence, and love.  Frequent collaborators Ennis and Dillon tell a story that encompasses a multitude of genres and features a cast of fully realized characters, while also examining touchy subjects like religion and America as only two Irishman can.  Their unique, outsider’s perspective seems to make everything fair game as they tackle the American South, warts and all.  Ennis proves he is a master writer, laying plot threads effortlessly while constantly building character.  Although Dillon’s art, at first glance, seems simplistic and plain, he demonstrates his storytelling abilities on every page, leading the reader through action sequences and conversations with the same aplomb.  He doesn’t have to be a showy artist because he knows what he’s doing.  Preacher is one of comics’ finest works, mixing action and romance, gross-out humor and religious conspiracy, and heroism and heartbreak.  While not for the faint of heart or the easily offended, this is a comic that you can’t go wrong with. 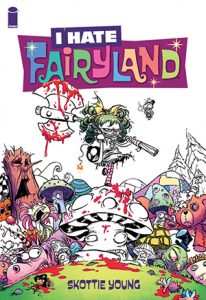 I HATE FAIRYLAND, VOL. 1: MADLY EVER AFTER

I Hate Fairyland: Madly Ever After marks the return of popular Marvel Comics cover artist Skottie Young, an Eisner Award-winning artist who earned the award in 2011 for his work on The Marvelous Land Of Oz. His work on the Guardians of the Galaxy superhero Rocket Raccoon gained him much critical acclaim. Don’t be fooled by his previous work on the L. Frank Baum Oz books; the hilariously violent I Hate Fairyland is not recommended for children. The series is rated M for Mature audiences and is definitely not a bedtime story for the kiddies. I Hate Fairyland follows the violently vile misadventures of Gert, a grown-up girl trapped in a 6-year-old’s body, as she attempts to escape the magically insane world of Fairyland. Fairyland is a sick and twisted world “filled with wonder, magic, laughter and joy.” Join in on all the mayhem as the extremely bitter Gert wields a rather large battle-axe on her blood-soaked journey through Fairyland, where she meets up with a low-life fly named Larry (Larrigan Wentsworth III) and Queen Cloudia, the ruler of all Fairyland. A bevy of devious, balls-to-the-wall characters like the Slug Lords, Mushroom Men, Zombie Fauns and some demented Barbarians keep things interesting for Gert. Regurgitating elements from the classic children’s stories of “Alice in Wonderland” and “The Wizard of Oz,” Skottie Young presents a uniquely twisted tale of dark humor. Skottie takes everything sweet and beautiful and turns it all upside down and inside out. The art is spectacular and brilliantly colored by Jean-Francois Beaulieu. I Hate Fairyland: Madly Ever After is very well-written and will leave you excited for the next volume. 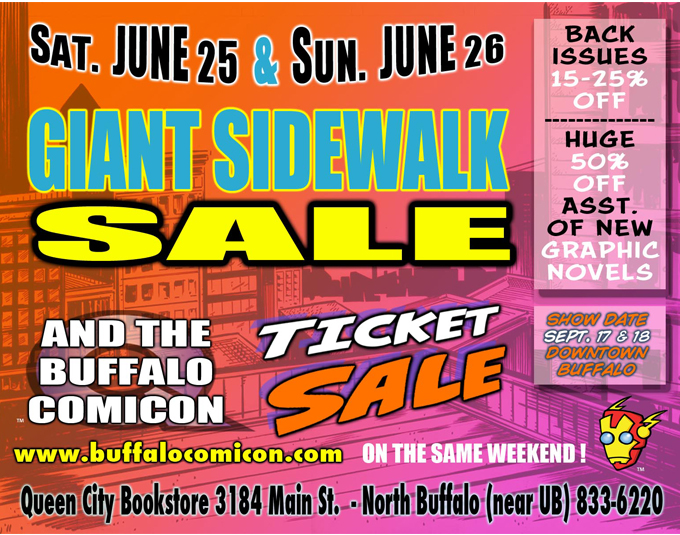