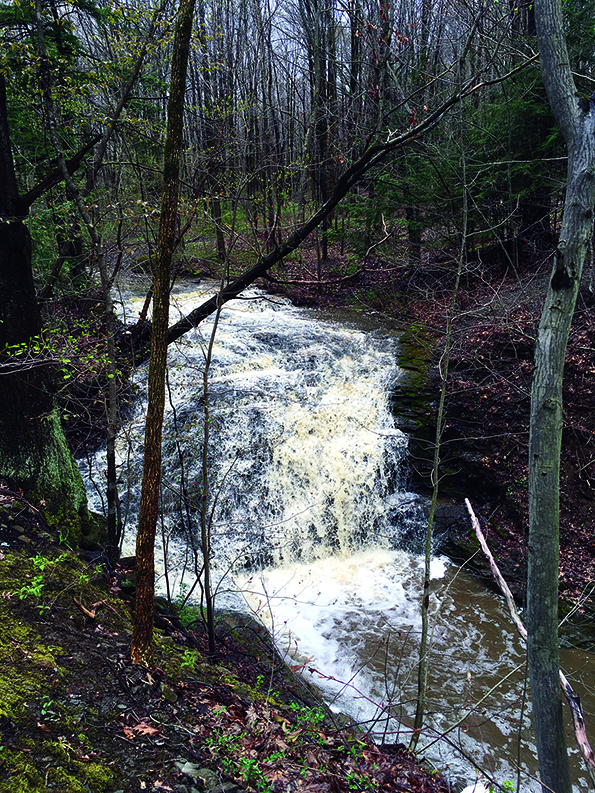 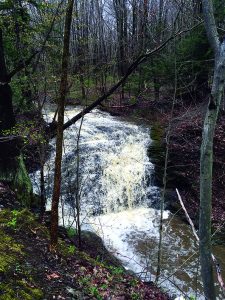 The Western New York Land Conservancy and Friends of Jackson Falls received notice of a $20,000 grant from the Gallogly Family Foundation to help turn Jackson Falls in Aurora, NY into a nature preserve.

The grant is a challenge gift, which means that someone in the community must match it, dollar for dollar, in order to for it be used towards creating the Jackson Falls Preserve.

This particular matching grant is unusual since in most cases, any number of people may donate and the matching grantor will match every donation dollar for dollar. But in this instance a single donor must come up with the entire $20,000 challenge for the Gallogly match to kick in.

That $20,000 donor will have a bench (one of five benches) placed at the preserve and named in his or her honor.   Those five benches will be hand-crafted by Roycroft Renaissance Master Artisan, Thomas Pafk, who is also a neighbor to the Jackson Falls property.

Only two of the five benches are still available to donors of $20,000.

“We are so grateful for this gift,” said Kerrie Gallo, Deputy Executive Director of Buffalo Niagara Riverkeeper and co-chair of the Friends of Jackson Falls. “I had a chance to visit Jackson Falls earlier this spring with my two little girls. We had so much fun exploring the forests and splashing through the creek. I want this land to be protected forever, so that children can always experience its natural beauty.”

The site to be preserved, in addition to the waterfalls, Jackson Falls, is a 57-acre property between Center Street and Hubbard Road in the Town of Aurora. There are two waterfalls, a ravine, and mature hemlock forests. It is home to migrating birds, breeding frogs and salamanders, and rare wildflowers. Its forests and wetlands are natural filters that improve water quality downstream in Lake Erie and the Niagara River.

If protected, it will become a publicly accessible nature preserve. The Land Conservancy and the Friends of Jackson Falls, a 30-person group of community members committed to protecting Jackson Falls, have, at this point, until October 31, 2016 to raise $600,000 and purchase the property. Afterward they would open its trails, and ensure its long-term care. If not protected, the land could be cleared and subdivided.

In addition to its natural beauty, Jackson Falls is steeped in local history. The Village of East Aurora is known for its Roycroft arts and crafts community. Elbert Hubbard, founder of Roycroft, often visited the forests and farms just south of East Aurora. He built a cabin there for longer – stays.

A few years after Hubbard died aboard the Lusitania, Cecil Jackson purchased a tract of land on a hill overlooking Hubbard’s cabin and the village. Cecil was the son of one of the Roycroft’s earliest workers in the furniture shop, Merritt Jackson. Cecil ran the Roycroft bank and stayed there until 1938 when the Roycroft business failed during the Great Depression.

The land Cecil purchased is the land that will become the Jackson Falls Preserve.

The current owners – three brothers – who hope to sell the land to he neighbors for preservation are – Cecil Jackson’s grandchildren. Steven Searl, MD, one of the three brothers, said, “We hope the preservation of this land for public enjoyment will carry forward the spirit of the Roycroft that was so important to our grandfather.”

Nancy Smith, Executive Director or the Western New York Land Conservancy and co-chair of the Friends of Jackson Falls said, “We have an incredible opportunity now to protect Jackson Falls for future generations. We need people to donate any amount they can to save this place, before our deadline in October. If you can match the $20,000 challenge gift, you will be one of only five people honored with a bench hand-crafted by a Roycroft Renaissance Master Artisan.”