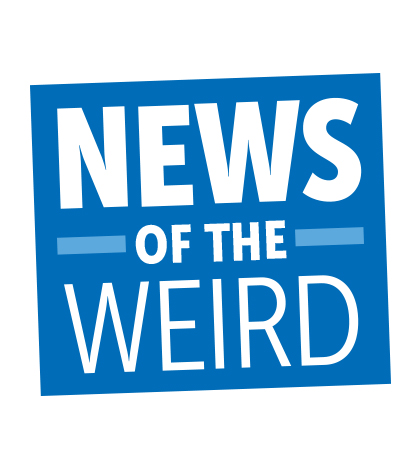 ? Recurring Theme Peaks
In May, an apparently devout woman named Katy Vasquez of Winter Park, Florida, posted a sincerely written entry on Facebook (and told Huffington Post in an interview) that she had just seen a “sign from God” — a cross — as a smudge in her infant’s soiled diaper. “I prayed to God for a sign that everything would be OK,” she gushed to the reporter. “It might not be the prettiest sign, but he put it where he knew I’d see it.” (Hence, News of the Weird retires the recurring theme begun in the 1980s with Jesus in a rust stain on an abandoned refrigerator.) [Huffington Post, 5-20-2016]

? Fine Points of the Law
— To their great surprise, Sophie Scafidi and friends, on an outing in Hampton Beach, New Hampshire, in June, learned that a man spying on and photographing them through a camera lens hidden in a Gatorade bottle painted black was not violating any law. Although the lens was rigged to the man’s phone, which contained beach photos, including some of children, police informed Scafidi that even surreptitious photography in sleazy circumstances, as long as done on public property, was legal — and that the only law broken in the incident was by the person who snatched the “camera” to show police. [WBZ-TV (Boston), 6-7-2016]
— A court in Canberra, Australia, found Wesley King not guilty of a 2014 burglary despite his DNA’s having been found at the crime scene — on underpants containing his fresh feces. Wrote Chief Justice Helen Murrell in June: There is a “reasonable possibility” that the burglar was someone else who was wearing unwashed underwear that had previously been worn by the accused. (Thus, not guilty of all charges.) [Australian Broadcasting Corp. News, 6-15-2016]

? Redneck Chronicles
At the monthly pro wrestling show in Ringgold, Georgia, in June, Patricia Crowe, 59, apparently having had enough of “bad guy” Paul Lee, reportedly jumped into the ring to rescue “good guy” Iron Mann, whom Lee had “tied up” and been beating with a chair. First, she cut Mann loose with her knife and then pulled a loaded handgun on Lee (and was eventually arrested by sheriff’s deputies). Crowe admitted that Lee’s earlier “mean” banter with ringside patrons had unnerved her, especially when he told Crowe to sit her “toothless self back down.” [NorthwestGeorgiaNews.com (Rome, Ga.), 6-8-2016]
? Compelling Explanations
(1) A former Malaysian legislator (Mr. S. Manikavasagam), who was charged in June with taking a bribe worth about US$7,300 from a contractor, claimed innocence — that somehow a package of money was thrown into his car as he drove down a city street. (2) A woman in Goldsboro, North Carolina, acquired a freezer from her neighbor several months ago but said she hadn’t looked inside until May, when she discovered parts of a dead body (and called authorities). She said the neighbor had discouraged her from opening the freezer because “a church” was using it as a “time capsule.” [Straits Times (Singapore), 6-18-2016] [WNCN-TV (Raleigh, N.C.), 6-2-2016]
? Government in Action
The Illinois secretary of state stopped mailing reminders about license-plate renewal deadlines in October because his office said the state could no longer afford the $450,000-a-month mailing cost (thus saving taxpayers $3.6 million so far). The Belleville (Illinois) News-Democrat and The Associated Press reported in June that the state has collected (not surprisingly!) $5.24 million more in the resultant “late fees” people had to pay on their license-plate renewals than it had collected the year before the reminders stopped. (A proposal for a 30-day grace period for expired plates failed in the just-concluded legislative session.) [Belleville News-Democrat, 6-23-2016]

? Drugs — Is There Anything They Can’t Do?
University of Georgia student Benjamin Abele, 22, was finally subdued by four police officers on May 29 after he had run naked down an Athens street and leaped into the gooey, malodorous back end of a garbage truck, wallowing in the slimy liquid that pools under the gunk (hindering arrest), and then attempting to burrow further into the filthiness to somehow “escape.” Two Taser shots had no effect, and he was identified as high on PCP. [Athens Banner-Herald, 6-3-2016]

? Meanwhile, Overseas
(1) Voters in June in the village of Draguseni, Romania, elected Vasile Cepoi mayor — no, not the Vasile Cepoi who lost, or the other Vasile Cepoi who lost. The winner was the incumbent mayor, Vasile Cepoi. (There was also a fourth candidate, who was not named Vasile Cepoi.) (2) In June, an “artificial intelligence” robot (“IR77”) being taught to “avoid obstacles” while moving around the Promobot lab in Perm, Russia, apparently “learned” how to walk out the door undetected, causing a downtown traffic jam when its batteries died. Handlers modified the computer script, but IR77 “escaped” again several days later, and engineers said they may have to dismantle the program and start over. [New York Times, 6-14-2016] [RT.com (Moscow), 6-23-2016]