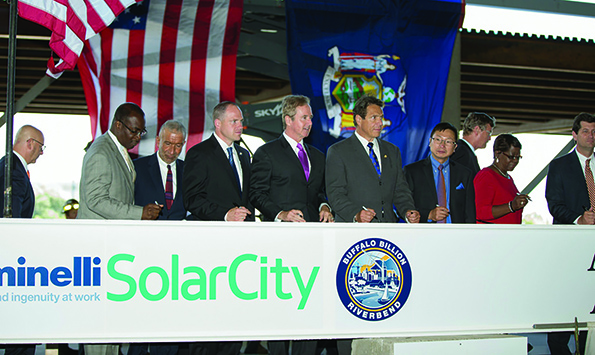 Gov. Andrew Cuomo’s “Buffalo Billion” project, now under investigation by both the U.S. Justice Department and state Attorney General Eric Schniederman, is in major league trouble and the massive project may be derailed by growing nervousness from IBM and other investors over the continuing corruption probes.

According to veteran New York Post investigative reporter Frederic U. Dicker, IBM — a major player in the state’s high-tech development efforts for more than a decade — has decided to “cease all new investments and additional hiring’’ regarding the plans until the probes are concluded.

And a major Japanese clean-energy company that had planned to invest $1.5 billion recently decided to pull out because of the ongoing scrutiny by Bharara and Schneiderman.

This is awful news for Western New York politicians, most of who are Democrats and all of whom have hitched their wagon’s to Cuomo’s Buffalo Billion star.

It’s also bad news for developer LP Ciminelli, whose chief executive, Louis P. Ciminelli, has generously supported Cuomo. Ciminelli and his associates and relatives have given nearly $150,000 to his campaigns over the years.

In November 2013, Ciminelli and his wife, Ann Louise, hosted a fund-raiser for Cuomo in Buffalo, three weeks before submitting a proposal to build parts of the Buffalo Billion. The couple gave $29,200 to the governor in January 2014, shortly before LP Ciminelli was selected as one of the winning developers.

And for Niagara Falls Mayor Paul Dyster, who paid $165,000 for a 5.5 acre parcel at 3625 Highland Ave. that owner Nick Dalacu bought the parcel in 2002 for about $40,000 and is currently assessed at $72,200, it’s just another bloody disaster. He, city Council Chairman Andrew Touma and erstwhile Planning Director Tom DeSantis all said that “spinoff” from the Buffalo Billion project would soon see the neglected brownfield transformed into a teeming center of industry.

Cuomo’s reaction to the scandal has worsened prospects for the ambitious projects, which include a $1?billion state-owned manufacturing plant for Elon Musk’s SolarCity in Buffalo. Sources said vital contracting decisions, including basic bill-paying for work already underway or completed, are being delayed.

Political considerations are undermining the effort as Cuomo seeks to shift the blame for possible corruption to Dr. Alain Kaloyeros, a physicist, who is the creative force behind the entire effort, a source close to many of the projects told The Post.

Kaloyeros, the state’s highest-paid official at $1.2 million a year as head of SUNY’s Polytechnic Institute and the brains behind $14 billion Albany Nano­Tech complex, has repeatedly denied engaging in any improper conduct.

Investor anxiety over the probes has accelerated since Bharara served a subpoena on Cuomo’s office in late April and state investigators working for Schneiderman raided SUNY Polytechnic in late May.

Cuomo’s reaction to Bharara’s probe — which focuses in part on two of his closest friends and longtime associates, former aide Joe Percoco and lobbyist Todd Howe — was to kick Kaloyeros to the curb and hire an outside investigator, Bart Schwartz, to oversee the development projects going forward.

But Schwartz has slowed the decision-making process to a crawl.

“No bills are being paid, no orders are being placed and the contractors at [the Buffalo Billion’s] Riverbend are starting to walk off the site,’’ said one source. “There’s concern — from the international corporate partners who are having second thoughts about New York to all the top [computer chip-making] clean-room and high-tech contractors who might go out of business — because of the cloud that’s over everything.’’

Bharara has been focusing his attention on Percoco and Howe — who were paid by major companies doing state business — and large state-hired construction firms that contributed to Cuomo’s re-election.

Schneiderman is focused more narrowly on possible bid-rigging and a violation of state antitrust laws in relation to a SUNY Polytechnic dorm construction project.

Schneiderman’s raid — of which some journalists were given notice even before investigators seized materials from an office once used by Howe — was described by a source close to SUNY as having been “clearly conducted with Cuomo’s encouragement’’ in an attempt to shift blame away from the governor to Kaloyeros.

“Cuomo and his people are trying to save their asses at the expense of everyone else,’’ the source said.