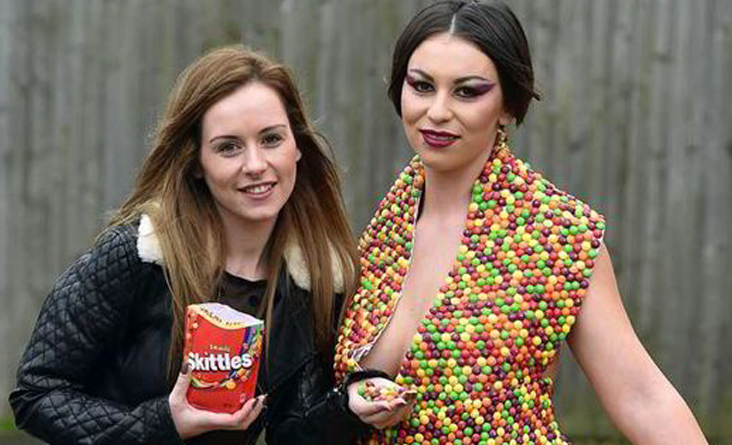 ? FASHION CHALLENGES Beautician Sarah Bryan, 28, of Wakefield, England, who garnered worldwide notoriety last year when she introduced a wearable dress made of 3,000 Skittles, returned this summer with a wearable skirt and bra made of donated human hair (a substantial amount, she said, pubic hair). She admits having had to work in an eye mask, breathing mask and thick gloves, out of fear of donors’ hygiene habits. (More conventionally, designer Van Tran of Brooklyn, New York, won the 12th annual (wearable) Toilet Paper Wedding Dress design contest in New York City in June, with a $10,000 prize from sponsors Charmin and Ripley’s Believe It or Not.) [Metro News (London), 7-5-2016] [Washington Post, 6-20-2016]

? WORLD’S GREATEST LAWYERS • Attorney Chris Dyer convinced a jury in La Crosse, Wisconsin, in June that there was “reasonable doubt” about what his client was doing in a family’s basement when he was discovered, pants down, perched (“doggy style”) over the family’s golden retriever, Cooper. Client Daniel Reinsvold (a stranger in the house) told the jury that he has an “intestinal disorder” that makes him subject to “emergencies.” What Reinsvold was doing was apparently perfectly clear to the resident’s 17-year-old daughter, who discovered the scene and reported Reinsvold “screwing Cooper” (and a vet said later that Cooper showed signs of trauma). Nonetheless, Reinsvold was convicted only of trespass and disorderly conduct. [La Crosse Tribune, 6-16- 2016]
Attorney Lee Pearlman finally earned an acquittal in June (after two hung-jury trials) for his client Danielle Goeller — one of a seemingly increasing number of drivers who hit pedestrians but claim they were unaware of anybody being hit. Goeller, 28, a trauma-room nurse with no intoxicants in her system, had struck a 60-year-old man on a busy, heavily lighted Tampa street at 11:45 p.m., cracking her windshield — but drove on without stopping. “What does she think she hit?” asked the prosecutor. “A deer? A bear?” Responded Pearlman, “She’s a scared girl in the middle of the night who doesn’t have the life experience other people do.” [Tampa Bay Times, 7-1-2016]

? BRIGHT IDEAS • British student Joshua Browder, 19, created an easy-to-use computer app to help drivers fight parking tickets they believe unjust — and now reports that users have won 160,000 cases (out of 250,000), all in London and New York City, by following his question-andanswer “chat” interface at DoNotPay.co.uk. Browder said he was motivated to develop the app (which, as of now, is still free of charge) after himself getting about 30 tickets he says he did not deserve. [Metro News (London), 6-28-2016]

? THE PASSING PARADE (1) A bicycle thief was stopped on June 10 when the bike’s owner and several other people chased him from the Wal-Mart parking lot in Eagle Point, Oregon, drawing the attention of a passing rider on horseback (Robert Borba), who joined the chase and moments later (according to a report in Portland’s The Oregonian) lassoed the man and restrained him until police arrived. (2) A kite surfer on a Sussex beach south of London got into trouble on June 26 and was unable to float back to land — until he was rescued by two Good Samaritans in kayaks. The saviors happened to be dressed as Batman and Robin for participating in the Shoreham Beach Superhero Paddle. [The Oregonian, 6-10-2016] [Bognor Regis Observer, 6-27-2016]

? WAIT, WHAT? • Not only are almost all federal employees above average, they are nearly all superior workers, according to a June Government Accountability Office review of agencies’ personnel-rating results. (Yes, the review included the departments of Veterans Affairs and Homeland Security.) Most agencies use a 1 (“unacceptable”) through 5 (“outstanding”) rating system, and GAO found that 99 percent were rated either 5 or 4 (“exceeds ‘fully acceptable’”). [Washington Post, 6-132016]
• Not many DUI stops result in attempts to locate the suspect’s chastity belt key, but the May 14 sobriety checkpoint stop of Curtis Eidam, 35, in Clinton, Tennessee, did. Eidam was outfitted in “red mesh see-through hose,” according to the police report, with a ribbon tied in his goatee, and also a “little skirt” (perhaps a tutu), when he told officers he needed his key, which happened to be on a necklace worn by his passenger (a “highly intoxicated” 44-year-old woman). Thus, Eidam was able to unlock and remove the chastity belt, which had been “attached to his penis.” (There was also a handgun — illegal in Tennessee for an intoxicated person to carry.) [Knoxville News Sentinel, 6-7-2016]

BUT IT’S OUR “POLICY”! Good Samaritan Derrick Deanda is facing a $143 bill from paramedics in Elk Grove, California, after he, passing a car crash, jumped out to pull out a man and his three children (including a 2-year-old), who were trapped in the wreckage. A short time later the paramedics arrived and, noticing that Deanda had a cut on his arm (from breaking the car’s window to free the family), bandaged him. Elk Grove has a policy charging “all patients” at a first-responder site $143 for the “rescue,” and Deanda received his bill in June. [KOVR-TV (Sacramento), 6-20-2016]

LEAST COMPETENT CRIMINALS Not Ready for Prime Time: In May, a 16-yearold boy in Lakewood, Washington, not only used Facebook to set up a marijuanadealer robbery (one of many people, lately, to incriminate themselves on social media), but during the robbery itself accidentally shot himself in the groin and femoral artery, requiring life-saving seven-hour surgery. [News Tribune (Tacoma), 5-2-2016]

READ THE FULL NEWS OF THE WEIRD DAILY AT WWW.WEIRDUNIVERSE.NET. OR SEND ITEMS TO WEIRDNEWS@EARTHLINK.NET