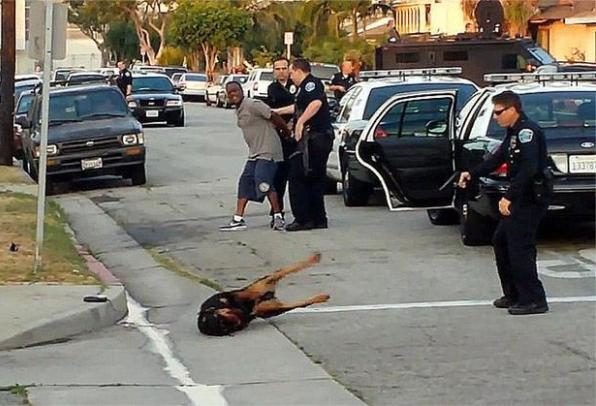 The Buffalo Police Department reported their Narcotics Division executed a series of search warrants during the week of July 25-29, arresting several individuals and announcing they seized small quantities of drugs, mostly marijuana.

What they did not report was the number of dogs killed while executing their raids. On Thursday, July 28, Cory Meer, 23, of Esser Street saw police raid his home, handcuff him and place him on the floor face down.

Meer claims Damian, although a pit bull, was not a threat to the officers.

“He is the most family friendly dog I’ve ever had… he’s never hurt anyone,” said Meer. “He would have licked the cops.”

As Meer was handcuffed and lying face down, Meer claims he begged police not to shoot his dog.

“My son lost his best friend right in front of him,” Meer said.

Unluckily for police, Meer was not charged with any crime, though someone in the house allegedly had a small amount of marijuana which, perhaps, made the raid worthwhile.

About 12 hours after Damian was killed, Michael Urban of Weaver Street was cooking breakfast, his dog, Gotham, a male, one and a half year old blue nose pit bull, black in color, stood next to his owner.

As police stormed the home, Urban and Gotham stood still. The dog gazed “politely” at police, about 10 feet from the door and made no threatening gestures.

Police, standing at the doorway, police took aim but not very good aim. They shot Gotham, but not fatally, and poor Gotham, frightened, crying and in mortal fear hid behind his owner.

That was a futile gesture as police moved in on the frightened dog and taking better aim shot downward. This time the bullet went clean through Gotham’s head which caused the poor dog’s brains to explode and spread all over the apartment.

The bullet used to kill Gotham almost took a second life as it went through the floor, narrowly missing the tenant in the downstairs apartment, Jami Krafchak, who was just waking up, but almost didn’t.

No one at Urban’s home matched the descriptions of the targets of the search warrant, who it appears, live at another home down the street.

Police might be fairly excused for this faux pas since the home they should have raided and killed dogs and narrowly missed bystanders, which was right down the street, does look similar to Urban’s house.

After killing Urban’s dog and sending a bullet through the ceiling, police rushed downstairs and found Ms. Krafchak in bedroom attire and more than a little startled.

They quickly searched or rather manhandled the woman and searched her apartment.

Neither Urban or Krafchak were charged with a crime.

Happily, the dog killing search of what seems to be the wrong house, did lead to one arrest – a roommate of Urban’s had a minute portion of marijuana on his person. ??        Meer and Urban have retained Albert to try and obtain justice for the slayings of their dogs. 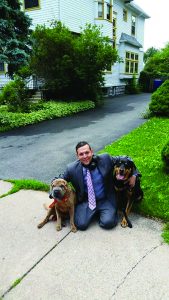 Albert said their cases are not unique. He has 12 active cases of dogs being killed by the Buffalo Police Department Narcotics Squad.

“They are going to say they are going after dangerous drug dealers,” Morris said. “Out of the cases I have, they’ve hit the wrong houses numerous times, found nothing numerous times, and I think at best, they’ve found a few pills at one of these houses… charges I got dismissed because they were filed wrong.”

Albert added he will not only file lawsuits, but plans to pursue criminal charges against the police who killed the two dogs.

Acting Erie County District Attorney Michael Flaherty held a press conference last week where he said, “We will go after whoever abuses any defenseless creature in our community.”?     Albert said, “We will make sure Mr. Flaherty has full cooperation so that he can fulfill his promise to the Western New York community…  And if he can ignore the politics of  going after a police officer for crimes they have always gotten free passes on, then maybe he does deserve to be the next DA of Erie County.”

When questioned privately, an officer who regularly raids home in search of narcotics, said that it is matter of policy to shoot pit bulls first and not try to find out if they are harmless or aggressive.