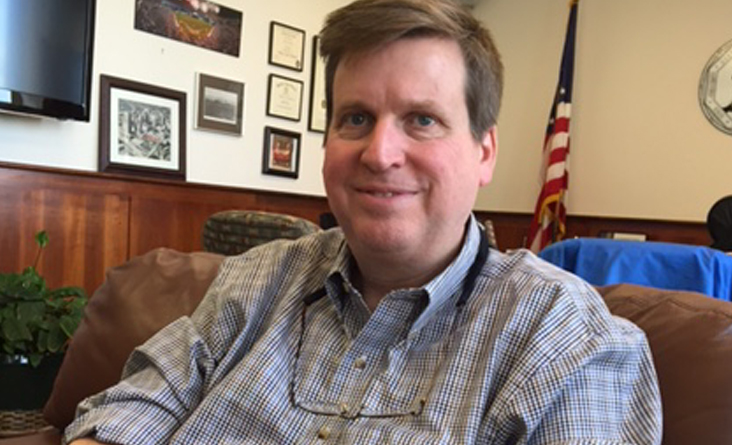 Acting District Attorney Michael Flaherty may have lost the Democratic primary last month to Tonawanda Town Attorney John Flynn, but he’s still carrying out his duties as the county’s top prosecutor with no letup in the hectic schedule he has been keeping since taking over the office last January after Frank Sedita left for State Supreme Court.

In fact, we caught up with DA Flaherty last Saturday shortly

after he returned from the monthly Masten District Stakeholder’s Breakfast at the Delavan Grider Community Center that began at 8:30 Saturday morning.

While he will be leaving office at the end of the year, Flaherty, 51, has not stopped doing the things he started when he took over 10 months ago, and that includes strong interaction with community groups, young and old, even on a Saturday when other lame ducks might have found other things to do.

“I firmly believe that crime prevention is more important than prosecution,” says the career prosecutor in emphasizing his community outreach.  Flaherty also started under his watch a relationship–call it an adoption–with the Buffalo Alternative High School on South Park Ave. for students who were unsuccessful in traditional schools.

Flaherty says he met with Buffalo Schools Supt. Kriner Cash over the summer, and asked him how he could make the district attorney’s office more visisble to students, and that’s how the “adoption” began.

“These are students with problems, and we want them to know that there are people who care about them,” said Flaherty.  “We will succeed If we can help give them a chance for a decent life at a time many of them are shunned.”

It seems a bit unusual to hear a prosecutor so focused on things like community involvement and high school students struggling to succeed, but that’s Mike Flaherty who has been involved in the district attorney’s office for most of the last 22 years, starting in 1993 as an assistant.  He climbed the ladder, except for three years from 2005 to 2008 when he was a partner in his father’s law firm, and worked just about every job in the office, rising to first assistant in 2010 where he served until Sedita left for the bench last January and he took over as acting DA.

Flaherty, a Democrat, sought the party’s endorsement for the job of district attorney, citing his long resume as a prosecutor, but local party leaders under Chairman Jeremy Zellner opted for Tonawanda Town Attorney Flynn, with Zellner saying the party needed a “new direction” from the Sedita years.

We have reported that Flaherty might have been able to win the Republican endorsement and not risk a Democratic primary, but he said on Saturday he passed on pursuing the GOP endorsement, which eventually went to little-known Joe Treanor, on the advice of his political advisers, including Jimmy Eagan, former secretary of the state Democratic Committee and the finance chairman of his campaign.

“I wouldn’t do anything different,” Flaherty said during Saturday’s interview.  “Nothing I regret.  I’m not a politician,” saying he listened to his advisers, even noting that his mothr and brother are both Republicans.

At least one poll had Flaherty with a sizeable lead running up to the primary vote, but he lost narrowly to Flynn in a low turnout race, 45 percent to 41 percent, with former assistant district attorney Mark Sacha a distant third.

During his time as acting district attorney, Flaherty started the first Public Untegrity Unit, created the office’s first Animal Cruelty Unit working closely with the SPCA, and put a strong emphasis on building lines of communication with community groups as evident by his apperance last Saturday at the Stakeholder’s breakfast.

“I inherited a professional and well-trained staff,” said Flaherty, “and they are very enthusiastic about doing our job and I have had the opportunity to prioritize the direction we are going to take, and that includes the domestic violence program.”

In fact, the acting DA has Old County Hall bathed in the color purple this month, stating that County Hall is where many domestic violence survivors seek help and “by bathing this grand building in the color purple, we are recognizing the struggle victims endure every day, and show we are a beacon of hope, providing safety and security in their lives.”

Also during his time as acting DA, Flaherty reopened the investigation into the hit-run death of a handyman in Evans three years ago, and a grand jury returned a manslaughter indictment in June against Gabriele Ballowe in the death of Barry Moss.  Former DA Sedita had been widely criticized for having a prior grand jury reconsider the case after returning an indictment, and then return a no bill.

Flaherty defended Sedita during the campaign, saying the evidence was insufficient in the first presentation to the grand jury but after the investigation was reopened, a witness changed her story, leading to the indictment of Ballowe.

So what’s next for Mike Flaherty after December 31?

“I am still weighing my options in both the public and private sector,” he says, “and I have made no decisions.  My number one priority is running the office.”

Among the honors Flaherty has received is the Morganthau Award presented by the District Attorneys Association of New York (2014) and “bestowed upon a prosecutor whose professional accomplishments best epitomize honesty, integrity and commitment to the fair and ethical administration of justice.”

Even John Flynn, who is hoping to replace Flaherty as DA come January if he’s successful against Treanor in November, called Flaherty “a good man.”

One of the area’s leading defense attorneys, Terry Connors, a former Bar Association Lawyer of the Year and a strong Flynn supporter, said Tuesday that “Mike Flaherty distinguished himself as acting district attorney, introducing new initiatives and resurrecting cold cases.”

Flaherty, a humble and dedicated public servant,  is quick to credit his assistants and support staff for the office’s good work, saying “when I have citizens come up to me and say ‘you are doing a great job,’ they mean the people that work for me are doing a great job.  You are only as good as the people working in your name.”

For now, Mike Flaherty will keep his nose to the grindstone at the DA’s office and enjoy time with his family including his wife, Amy, daughters Beth and Bridget, and his dog Rori, a bullmastiff that clearly enjoys a special place in his owner’s heart, as do most dogs who give so much to their owners their families.  I know.